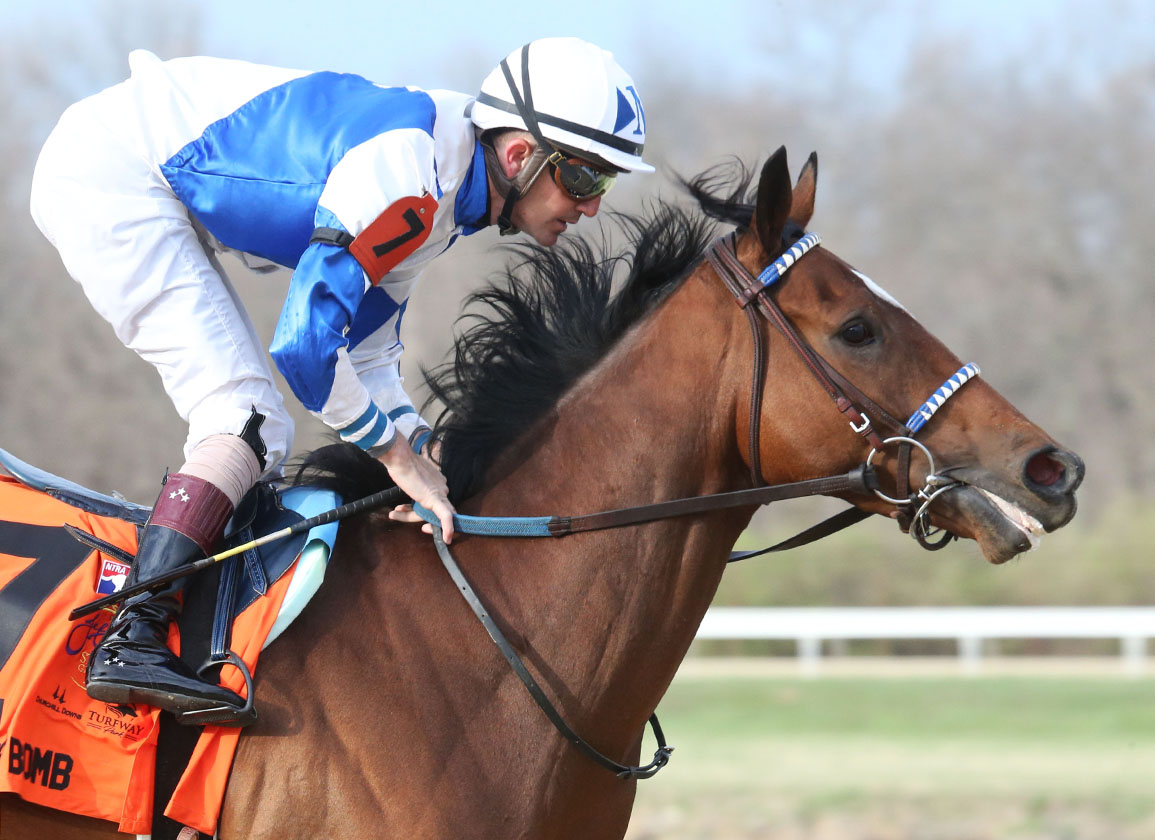 On a day of three 100-point prep races for the GI Kentucky Derby, it was TIZ THE BOMB (c, 3, Hit It a Bomb–Tiz the Key, by Tiznow)–a colt not officially pointing to the Derby–who won Saturday's GIII Jeff Ruby Steaks at Turfway Park to snag one of those coveted 100-point slots. Drifting from 6-5 out to 8-5, but still clearly favored as the gates flew in, Tiz the Bomb had a smooth break and sat a midfield trip on the outside through fractions of :23.25 and :47.06. Breathing menacingly down the leaders' necks, he was let go by Brian Hernandez, Jr. at about the six-furlong mark and quickly moved into contention. Tiz the Bomb overhauled a simultaneously moving Tawny Port (Pioneerof the Nile), who had unseated rider Manny Franco prior to the race, and took command with ease after a couple of left-handed taps, winning wrapped up with giant strides as he threw his ears forward crossing the wire.

Only eight races on the Kentucky Derby trail give as many as 100 points to the winner–good for a guaranteed spot in the Derby starting gate–but trainer Kenny McPeek suggested before the race that Tiz the Bomb will likely bypass the Derby and target the G1 QIPCO 2000 Guineas at Newmarket Apr. 30 and/or the G1 Cazoo Derby at Epsom June 4. He wasn't as firm on that stance immediately after the race.

“We're not going to make a decision quickly,” said McPeek, who said the ownership team wasn't going to rule out the Kentucky Derby. “We'll have to figure out some details. I do think the further he goes, the better. Just a real special colt. We've got some options and they're really great options. Right now, we'll enjoy this and go from there.”

He added regarding the Jeff Ruby Steaks trip: “Brian had him in a really good spot and it looked like he was going to have to carry some outside ground to get there, but he's a good-enough horse to handle it. I'm glad he had him out of trouble. This colt traveled the furthest distance and got it done anyway… We shouldn't rule out Kentucky right now. I think he might be able to handle that.”

The Turfway feature, now in its 51st running, has been contested under seven different names/sponsorships throughout the years and has produced two Kentucky Derby winners in Animal Kingdom (Leroidesanimaux {Brz}, 2011) and Lil E. Tee (At the Threshold, 1992).

The Jeff Ruby Steaks was Tiz the Bomb's second win in as many starts on Turfway's synthetic surface, as he was coming off a victory in the John Battaglia Memorial S. Mar. 5 after a sophomore dirt experiment that led to an off-the-board finish behind White Abarrio (Race Day) and Simplification (Not This Time) in the GIII Holy Bull S. at Gulfstream Feb. 5. Those two were one-three in Saturday's GI Florida Derby. Last year, Tiz the Bomb was Keeneland's GII Bourbon S. winner and Del Mar's GI Breeders' Cup Juvenile Turf runner-up, in addition to victor of the Kentucky Downs Juvenile Mile S.

McPeek is known for his prowess in picking out horses at the sales that may be overlooked by others and going on to success with them. While no one would have called Tiz the Bomb a bargain at $330,000, as he was Hit It a Bomb's most expensive yearling by far and one of only two to bring six figures, it had to take nerves of steel to buy a yearling by an unproven sire for so far over that stallion's average and median. McPeek has been rewarded with Hit It a Bomb's most successful runner to date. The War Front stallion, who stands at Spendthrift and was winner of the 2015 GI Breeders' Cup Juvenile Turf, has two graded winners and three black-type winners from two small crops to race.

In contrast, broodmare sire Tiznow, who is pensioned at WinStar, is no stranger to the stakes scene as he has 52 black-type winners out of his daughters, including GI Belmont S./GI Travers S./GI Florida Derby/GI Champagne S. winner Tiz the Law (Constitution), who was also second in the 2020 GI Kentucky Derby.

Tiz the Bomb was bred by Spendthrift after the farm had purchased Tiz the Key for $330,000–the same price her son would eventually bring–as a 2012 Keeneland September yearling. She's been bred exclusively to Spendthrift stallions, with 2-year-old filly Bel Rosso (Free Drop Billy), who sold for $180,000 at FTKOCT to Rocket Ship Racing, and a yearling colt by Mor Spirit in the pipeline. She delivered a Gormley filly Feb. 25. Tiz the Key hails from one of the best families in the stud book, as her fourth dam is Gay Missile (Sir Gaylord). Among Gay Missile's several influential foals were Lassie Dear (Buckpasser), dam of Broodmare of the Year Weekend Surprise (Secretariat), who in turn produced A.P. Indy (Seattle Slew). Gay Missile was out of blue hen Missy Baba (My Babu {Fr}), whose notable foals included Broodmare of the Year Toll Booth (Buckpasser).