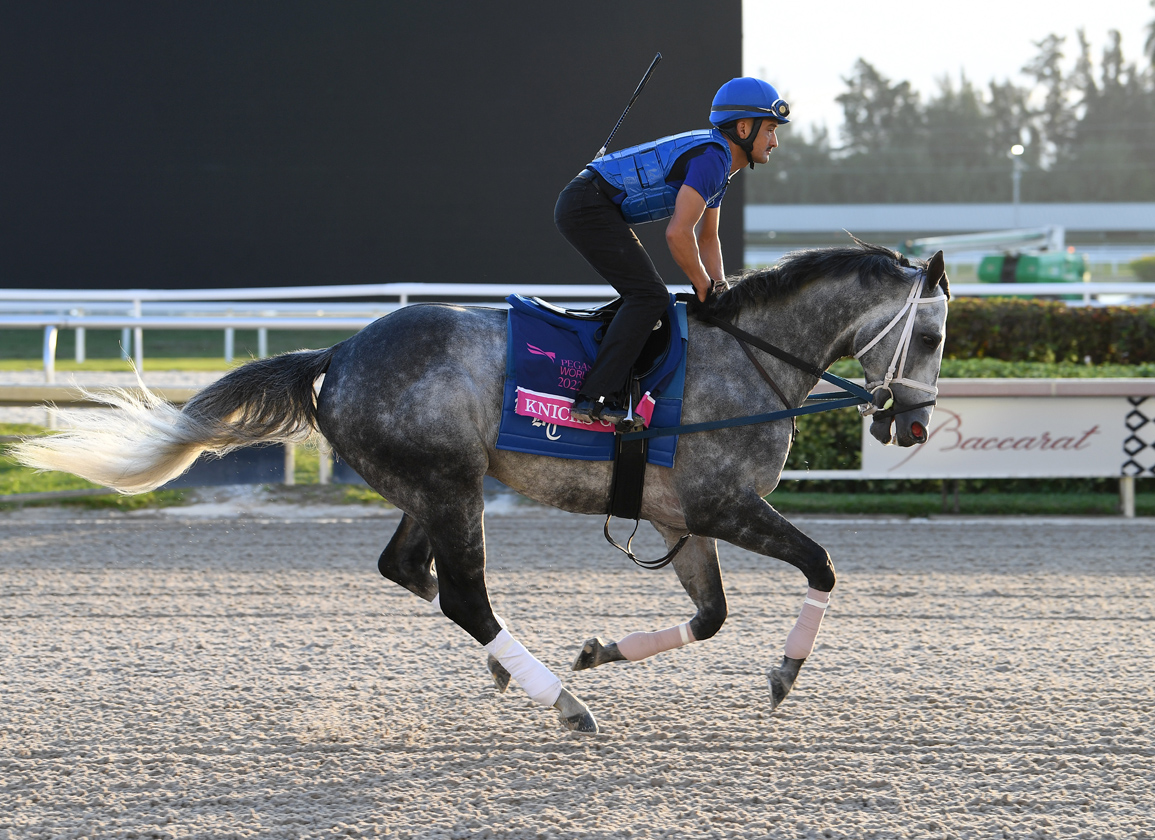 When a racetrack musters a $3-million purse for a featured event, the hope is that racing's stars will attend the big dance. And this year's GI Pegasus World Cup Invitational S. certainly succeeded in attracting two of the biggest names–Knicks Go (Paynter) and Life Is Good (Into Mischief)–in the American handicap division.

“The Breeders' Cup Classic was his biggest race he's had to date,” said trainer Brad Cox. “He's going to go to Taylor Made after the Pegasus to become a stallion. After the Classic, we had decided if he came out of the race in good order, which he did, we would pursue the Pegasus. He has trained as well as he did going into the Classic.”

He continued, “After the [Saudi Cup] last year, he was fresh and came back and didn't run as well as we had hoped in the Met Mile. Personally, I think that had a lot to do with that race being around one turn. He has not had a lot of time off, and that's very similar to what we did with the [2020 GI Breeders' Cup] Dirt Mile and last year's Pegasus. So, we have pretty much kept him on the same routine. He went over to Taylor Made for three to four days to be shown to potential breeders and was shown on a shank. Aside from that, he's been training the whole time. He's been doing well, his weight is great and his attitude is good. And he's been training great and his works have been phenomenal.”

The striking grey was installed as the 6-5 morning-line favorite in a field of nine older horses after drawing the one hole Tuesday. Joel Rosario has the call.

He added, “It's the same approach we took in the Breeders' Cup. We'll see how it goes. He's proven at a mile and an eighth and he does like the surface there. He likes the configuration of the racetrack there at Gulfstream–he proved that last year. We're just going to come out of there running and see what happens.”

China Horse Club and WinStar Farm are represented by Life Is Good, who has done very little wrong in his career, winning four of five graded attempts, including a tour-de-force victory in the GI Breeders' Cup Dirt Mile at Del Mar last November. Under the guidance of Bob Baffert, the powerful bay became a 'TDN Rising Star' with a 9 1/2-length score at Del Mar in the fall of 2020 before returning the following spring to annex the GIII Sham S. and GII San Felipe S.–defeating subsequent GI Kentucky Derby winner Medina Spirit (Protanico) on both of those occasions.

“He came to us with high expectations, and he had a great resume,” said trainer Todd Pletcher of Life Is Good's arrival. “Initially, we were just getting to know him and see how he trains. He trained exceptionally well, so we had high hopes for him.”

After joining the Pletcher string, the $525,000 KEESEP yearling graduate came up a neck short to Jackie's Warrior (Maclean's Music) in the GI H. Allen Jerkens Memorial at Saratoga. With Irad Ortiz Jr. taking over riding duties for the Sept. 25 GII Kelso H. at Belmont, the sophomore drubbed older rivals for the first time to win by 5 1/2 lengths and came back with an even more sparkling performance when winning for fun on Breeders' Cup Day.

“We were unlucky in the Allen Jerkens to be beaten that day, but we mapped out a course at that point and we felt like the Dirt Mile was the correct race for him,” explained Pletcher. “The Kelso seemed like a good race to bridge the gap between the Jerkens and the Dirt Mile and I worked out well for him. Since that, we've been focused on this race. And we're going great.

“Knicks Go is a very fast horse. We know that. But we're not going to alter our style of running. And we're not going to take away his strength, which is his high-cruising speed. I honestly don't know for sure what's going to happen, at least in the first quarter or half, because you are going to have two horses that are looking for the same kind of trip.”

Hoping to pick up the pieces should a speed duel develop up front, 2019 GI Belmont S. victor Sir Winston (Awesome Again) enters the fray off a win in Woodbine's 12-furlong GIII Valedictory S. Dec. 5. Edwin Gonzalez gets the mount for trainer Mark Casse. Also likely to settle just off the pace and hope for a meltdown up front, Stilleto Boy (Shackleford) has hit the board in five of seven stakes races in 2021, including a win in the Iowa Derby and a second in the GI Awesome Again S. He was last seen finishing third in the seven-furlong GI Malibu S. Dec. 26.