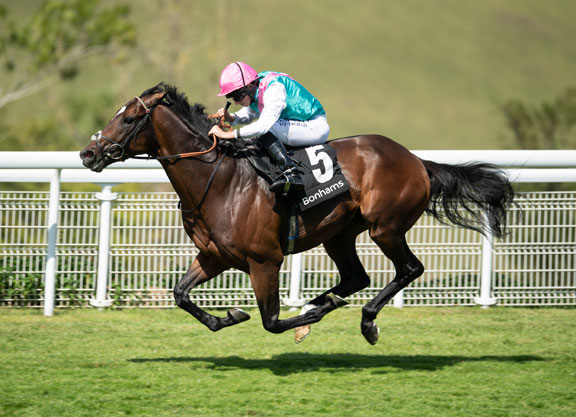 Khalid Abdullah’s Tilsit (First Defence) followed up a June 4 debut second at Newcastle with a breakthrough score–by a whopping 19 lengths–back there June 27 and survived a lengthy stewards’ enquiry to be confirmed the winner of Friday’s G3 Bonhams Thoroughbred S. at Goodwood. The 10-1 chance was steadied to race in third behind a modest tempo set by My Oberon (Ire) (Dubawi {Ire}) and remained there through halfway in this turf bow. Quickening to launch his challenge at the quarter-mile marker, he edged in front entering the final eighth, but suddenly veered right to force that rival into the far-side fence with 150 yards remaining before returning on an even keel to hit the line with a 1 1/2-length advantage. My Oberon somehow managed to remain upright for second place, finishing 2 1/2 lengths ahead of 4-7 favourite Khaloosy (Ire) (Dubawi {Ire}) in third. As expected, Ryan Moore was sanctioned for the final-furlong incident which impeded My Oberon and incurred a five-day suspension for careless riding in the debrief.

“Tilsit had two runs at Newcastle, which is a completely different track to Goodwood, and it was his first start on turf so he has really stepped up and done so well,” commented trainer Charlie Hills. “It was a good step forward really and he has beaten two very nice horses. We knew coming into today that we would know where we would stand after the race and we are all very excited now. Tilsit has come a long way and the guys at home have done a great job. [NH jockey] Will Kennedy has been coming in most days to ride and he has done a fantastic job. A lot of thought has gone into this horse. We’ll see how he is tomorrow morning and go from there. We could maybe come back here for the [G2] Celebration Mile.”

Teddy Grimthorpe added, “That was a huge step forward, but he is still very babyish and has to mature. You could see that slightly in the paddock beforehand, but he was much better than he was the previous two times. He has handled the race pretty well, but he did wander a bit, no doubt about that. He has some talent, no question, and I think fast ground is the key to him as well. I think he is still a bit goofy and immature and I wasn’t at all optimistic we would keep the race. He was the best horse, no doubt about that, but it always worries me. Ryan [Moore] had his whip in his right hand, so that was good, and he has just dived in. He was always going to win so from that point of view the rules are spot on, but it is always a nervous moment. This was Tilsit’s first race on turf and part of the learning curve for him, but he is pretty progressive by the looks of things. The Celebration Mile here could be a possibility and it is always nice to have a few thoughts about where we go and what to do. He looks on an upward curve and, trip-wise, I think we will stay at a mile.”