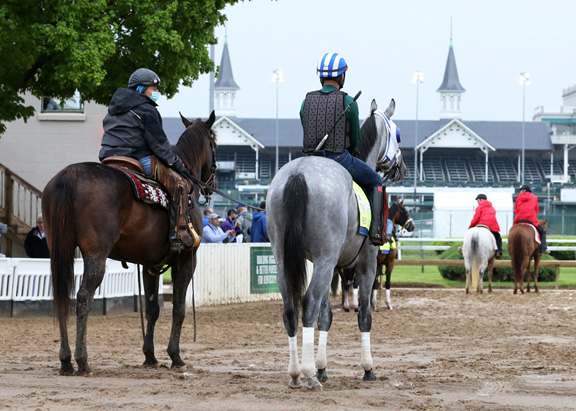 LOUISVILLE, KY – Despite heavy overnight rain leaving the Churchill Downs main track a sloppy mess, there was still plenty to take in during Thursday's GI Kentucky Derby/Oaks training session, including an appearance by the horse that has the big bulls-eye on his back.

Rock Your World (Candy Ride {Arg}), Soup and Sandwich (Into Mischief) and Hot Rod Charlie (Oxbow) drew a nice crowd of admirers by the Lukas gap as the track was being sealed beneath ominous skies and humid conditions just a tick before 7:30 a.m.

With his tail tied, Medina Spirit (Protonico) was among the first to enter and had a nice bounce to his step jogging by the wrong way over the saturated surface.

Hall of Fame trainer Mark Casse stood on the track to watch his duo of the stunning gray Soup and Sandwich and Helium (Ironicus) jog. You certainly know who the crew at TDN will be rooting for Saturday.

Casse exchanged pleasantries by the gap with team Medina Spirit–Bob Baffert and John Velazquez–as his pair made their way back to the barn.

Likely Derby second-choice Rock Your World continues to give off good vibes. With his high-knee action, you can see why the unbeaten GI Runhappy Santa Anita Derby winner began his career on grass. Shades of Barbaro and Big Brown? That's where my money is heading.

Even with a pair of blinkers on, Hot Rod Charlie still gave the cameras and media lined up on the backstretch a glance passing by alongside his famous stable pony Lava Man. Hot Rod Charlie may arguably be reaching out the best over the surface during his gallops from all of the Derby horses this week. Ignore at your own risk.

The unbeaten morning-line favorite and champion 2-year-old Essential Quality (Tapit) doesn't exactly wow you during his training, but the last time we checked, it only counts in the afternoons.

His Brad Cox-trained stablemate and fellow 'Rising Star' Mandaloun (Into Mischief), however, has become a bit of a buzz horse despite a puzzling last-out sixth in the GII Louisiana Derby. That's how good he's looked in the flesh.

Both of the Cox runners went to the gate, and interestingly enough, Essential Quality's white-and-blue Godolphin branded blinkers were removed after his schooling session. He went on to gallop for about 1 5/8 miles afterward without the shades.

Midnight Bourbon (Tiznow)'s antics on the backstretch and paddock schooling sessions have been well-documented on Twitter this week–getting loose during bath time will do that–but he's had his eyes on the prize while training for what it's worth. Interesting longshot to consider.

Back at the barns, meanwhile, the easy-to-root-for native of Kentucky trainer Greg Foley chatted with Jeff Lifson and a group of West Point partners. The stretch-running O Besos (Orb) jogged a mile a bit earlier around 6:15 a.m.

King Fury (Curlin) seemed to be enjoying himself once again over the off going–he certainly did so last out in the GIII Stonestreet Lexington S. His handler smiled for a quick photo and asked the flashy, blaze-faced chestnut to pose as he was getting cleaned up outside of Ken McPeek's headquarters.

Have to love seeing that heavyweight champ Tyson Fury will be in his corner and did in fact take McPeek up on his Twitter invite to attend the Derby.

With his ears up, Essential Quality's class and great mind were on display, never turning a hair before a group of media assembled for his bath.

With more heavy rain looming, his blue-and-white Godolphin cooler was on again shortly and it was back to his stall as training hours began to wind down.