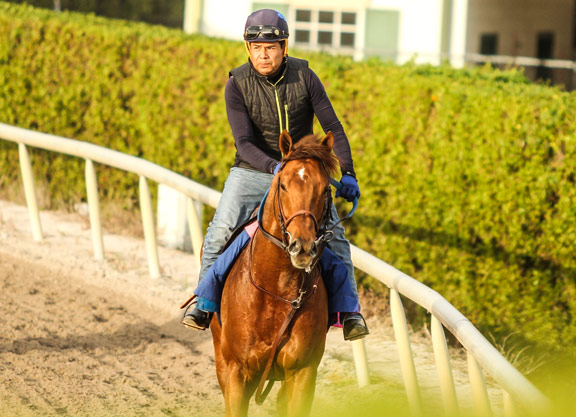 HALLANDALE BEACH, FL.–With the Eclipse Awards just 12 hours away and all Pegasus contenders on site with 48 hours to go until race day, the track was buzzing with activity at Gulfstream Thursday morning.

With temperatures creeping into the high 70s and the sun playing peek-a-boo through the clouds, Pegasus action kicked into full swing after the break with recent GI Clark H. runner-up Bravazo (Awesome Again), led by Lukas aboard his famous buckskin pony Starbuck, first to step hoof on the track after the tractors. The dark bay jogged the wrong way before turning around and coming back at an easy gallop with Lukas and Starbuck waiting to pick him up.

Just a few moments after Bravazo made his entrance, Pegasus favorite Accelerate (Lookin at Lucky) jogged onto the track and spent some time schooling in the gates. The GI Breeders' Cup Classic winner kept a low profile as he galloped by before turning around and quietly walking past Lukas along the outer rail towards the gap.

The China Horse Club's Teo Ah Khing and WinStar's Elliott Walden were on hand to oversee their Pegasus Turf favorite Yoshida (Jpn) (Heart's Cry)'s morning exercises. His Hall of Fame trainer Bill Mott rode onto the track first with his other Turf contender Channel Maker (English Channel) in tow and Yoshida followed, escorted by Mott's assistant aboard another pony. The pair made good impressions as they galloped by on their own and both horses and their ponies were quite lathered up when they exited the track.

Breeders' Cup Classic runner-up Gunnevera (Dialed In) looked right at home as he made his way over the Hallandale main track just before 8 a.m. Something Awesome (Awesome Again) came by with ears up about a minute later and was quickly followed by Kukulkan (Mex) (Point Determined), who galloped by strongly over a surface he has already won over in the Dec. 8 Clasico del Caribe.

The regally bred 'TDN Rising Star' Delta Prince (Street Cry {Ire}) snuck by during the Pegasus frenzy, but took a minute to stop and take in the scene on the backstretch just as one of his Pegasus Turf foes Magic Wand (Ire) (Galileo {Ire}) went past on the inside rail.

Ron Paolucci and his trainer Anthony Quartarolo, who will send out Imperative (Bernardini) in the Pegasus, surveyed the action from Chief's Corner, a backstretch viewing stand named in honor of the late H. Allen Jerkens. Paolucci will also be represented by longshot Dubby Dubbie (Ice Box) in the Pegasus Turf.

A flock of photographers waited anxiously at the gap around 9:30 a.m. to snap a photo of the final Pegasus contender of the morning True Timber (Mineshaft). The Kiaran McLaughlin pupil, who, like Bravazo, will carry the colors of Calumet Farm, appeared calm and cool as he walked up the path from Barn 16 alongside a chestnut pony. Once he stepped hoof on the track, however, he began to feel his oats, tossing his head and breaking free of the pony. His escort quickly grabbed the lead and they jogged along clockwise without further incident. The GI Cigar Mile runner-up was back to his initial calm demeanor as he galloped past his paparazzi at an easy pace.

Accelerate and Kukulkan were among the paddock schoolers later in the afternoon as temperatures rose shortly before a thunderstorm broke out. Friday promises to be equally busy with increased excitement as the $16-million day gets closer.