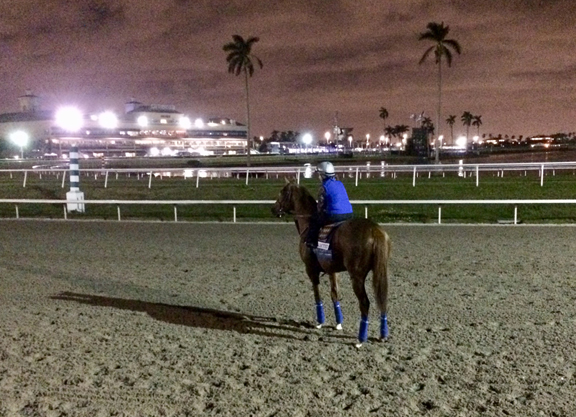 Increasingly gusty winds swept across the Gulfstream Park oval during Thursday morning training hours–the first session of the week where all 12 GI Pegasus World Cup Invitational contenders were present on-site. Most notably, the Bob Baffert-trained pair of Collected (City Zip) and West Coast (Flatter) got their first looks at the track after arriving from California Wednesday afternoon.

Collected was the first to hit the track, briefly pausing to take in his new surroundings beneath exercise rider Dana Barnes on the clubhouse turn. The newly turned 5-year-old proceeded to put in a strong gallop that gave every indication he handled the cross-country trip well. West Coast came out later in the morning and also displayed good energy in his training.

Jorge Navarro has a duo of his own for the Pegasus and sent both War Story (Northern Afleet) and Sharp Azteca (Freud) out to train before sunrise. As has been the case in previous mornings, their gallops matched their running styles, with Sharp Azteca training with vigor and War Story assuming a more relaxed tempo. Although Sharp Azteca trained during the mid-morning session earlier in the week, Navarro chose the earlier, typically more quiet training window Thursday, noting, “No traffic jam this morning,” on Twitter. Chuck Fipke's Seeking the Soul (Perfect Soul {Ire}) made a favorable impression hugging the rail in his pre-dawn gallop and is slated to break from post 11 Saturday.

After the renovation break, activity began to pick up on the track and on the frontside, where familiar faces such as West Point Thoroughbreds' Terry Finley and Hall of Fame jockey Angel Cordero were on hand to observe training. West Coast, local hero Gunnevera (Dialed In) and 4-5 Pegasus favorite Gun Runner (Candy Ride {Arg}) all trained simultaneously after the track reopened, with the latter schooling in the gate before embarking on an abbreviated-but-sharp gallop. Gun Runner, who was expected to be named 2017's Horse of the Year Thursday evening, displayed the same focus and composure that has come to define his recent four-race win streak amid the morning rush.

Training hours wrapped up with a number of Pegasus longshots appearing during the final session, including Toast of New York (Thewayyouare), who galloped a circuit of the track one day after being credited with a three-furlong breeze in :39.99 as a tune-up for Saturday's test.