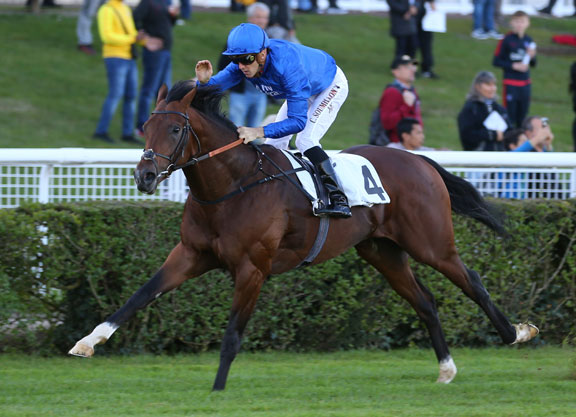 2018 G1 Dubai World Cup winner Thunder Snow (Ire) (Helmet {Aus}) was out for a spin over the Meydan main track on Tuesday morning as he prepares for the G1 Al Maktoum Challenge R3 on Super Saturday, Mar. 9. The Godolphin colourbearer, who is based at the Al Quoz training centre only a five-minute drive from Meydan, was part of a six-horse contingent and galloped two laps alongside recent Carnival winners Major Partnership (Ire) (Iffraaj {GB}) and Very Talented (Ire) (Invincible Spirit {Ire}), before distancing his workmates on the second lap. The latter starts in Thursday's Listed Curlin H.

“He did his main work at Al Quoz, but sometimes I take a group of horses to Meydan to get a feel or the dirt track,” trainer bin Suroor told the Meydan notes team. “We show them the track and get some exercise on it. It's just routine and he looked good on it. He's going to be ready for Super Saturday, but he will surely improve from the run. He hasn't raced since November of last year [when third in the $6-million GI Breeders' Cup Classic at Churchill Downs]. He's had a nice break and we are happy with how he's moved in his work. A week before the race, he will have another blowout at Al Quoz and we will be ready to run. Whatever happens, he will need the run and improve from it.”

Bin Suroor also provided an update on reigning G1 Dubai Turf hero Benbatl (GB) (Dubawi {Ire}), who will not defend his title and instead point to a campaign in Europe later in the season.

“Like [MG1SW] Best Solution (Ire) (Kodiac {GB}), Benbatl had a very hard season last year, running from January until November,” bin Suroor explained. “We will try to keep him fresh for the European season and he will miss the Dubai Turf, but we have [MGSW] Dream Castle (GB) (Frankel {GB}), who is doing very well. We will prepare him for the [G1] Jebel Hatta and Dubai Turf and he will try to do what we did with Benbatl did last year.