Thunder Moon On Track For Guineas 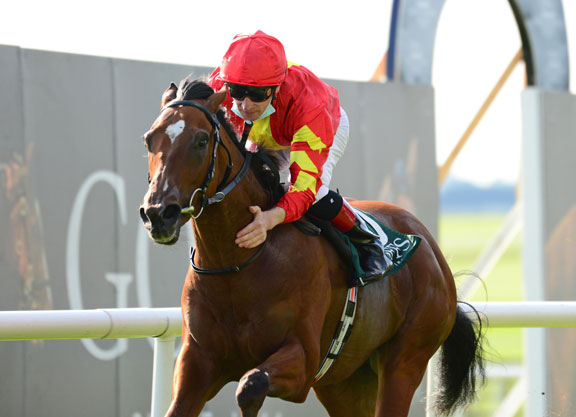 Aidan O'Brien has saddled 10 winners of the first Classic of the season and has 12 entries for the 2000 Guineas, including 2-year-old champion St Mark's Basilica (Fr) (Siyouni {Fr}) and G2 Vintage S. scorer Battleground (War Front). O'Brien's son Joseph, likewise, has Chantal Regalado-Gonzalez's G1 Goffs Vincent O'Brien National S. winner Thunder Moon (Ire) (Zoffany {Ire}) signed on, and he said of the bay, a last-out third in the G1 Dewhurst S., “Thunder Moon has wintered well and we are pleased with where we are. There is plenty of water still to go under the bridge yet but it is exciting to have a live contender for the 2000 Guineas. We were very pleased with the run in the Dewhurst considering the ground on the day. He was posted on a tougher part of the track as there was bias towards the stands rails but we were pleased with him. He is obviously a pretty quick horse on what he has done so far but he shapes as though a mile will be within compass so I don't see the trip being a problem. I do feel that he will be better on quicker ground as well. It is nice to have had a run at the track previously and that experience there won't do him any harm. We have the option of running him beforehand but we will decide nearer the time and see how the horse is before making that decision.”

O'Brien added of his champion 2-year-old filly Pretty Gorgeous (Fr) (Lawman {Fr}), who is among the early favourites for the 1000 Guineas, “She is obviously a course and distance winner so we know she gets the trip well. I was very pleased with the performance in the Fillies' Mile. It was a brave performance as she had a bit of an interrupted preparation going into the race.

“She is an exciting filly. Her pedigree suggests she will be open to stay further than a mile as well which gives her plenty of options. Like with Thunder Moon, she has wintered well and I'm pleased with where we are. She was consistently solid last season and hopefully we can keep it that way. She was fine on both soft and good ground so she is versatile ground-wise. A decision on whether she has a prep run will depend on how she is training and how we feel closer to the time.”

Richard Hannon, meanwhile, said of the G2 Vintage S. winner Chindit (Ire) (Wootton Bassett {GB}), who is engaged for the 2000 Guineas, “I'm very pleased with him and he has done very well. He did just a bit more than a canter a few days ago, him [fellow Guineas entrants] Fancy Man (Ire) and Etonian (Ire) all worked and it was a lovely start.

“Regarding his Newmarket run [ninth in the Dewhurst], the times say that the ground was heavy and it looked it. Chindit will go wherever there is decent ground. If it turns up at Newbury that is where he will go first [for the G3 Greenham S.]. He had done all his winning on flat tracks at Doncaster and Ascot before Newmarket and I'm not sure he loved the track. He has always been a neat horse with a good action. He is a good horse with a lot of speed. I think he would get the mile in a Guineas and would be suited by that trip as he is a very straightforward, simple horse.”

“We are very much looking at the Guineas but that is still a long way off,” he said. “She has had a good holiday but she still looks a bit wintery in her coat so we will see what happens over the next month as we all know what fillies can do in the spring. I really was impressed in the Cheveley Park as it was only her third run and she was entitled to improve again. She has done well physically but we haven't really started serious work yet. Her pedigree offers mixed messages regarding the trip and that is about all I can go on at this stage. I'd be hopeful she would get it though as she relaxes pretty well but there is nothing we can do to find out until we try it. I think the plan if all goes well is to go to the Fred Darling first as a prep as I would like her to go over seven before going over a mile.”

“I'm thrilled with the way she has come back from her winter break at Ben and Lucy's Sangster's in Manton,” Chapple-Hyam said. “She has put on a nice 77 pounds and she has matured into a filly that should be competitive for the Guineas. The plan will be to start her off in the [G3] Nell Gwyn [S.] and then two weeks later head for the Guineas. It was a quick turnaround between her two runs in her maiden and the Oh So Sharp last season so we know she can do it. I think she is a serious filly that is potentially top drawer. She has wintered well and developed nicely. She has got all the right attributes. She has done it on different ground types and I think if it is real good ground you will really see her scoot along. She is not complicated as she doesn't have to lead or have cover or come with a late run. If you look at her last run she hit the rising ground going away so I don't see the mile being a problem at all.”