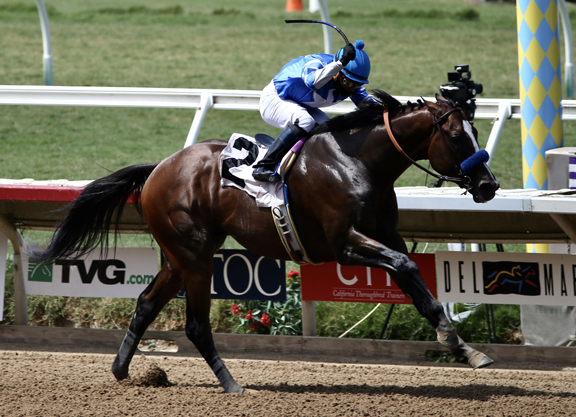 Thousand Words (Pioneerof the Nile) returned to winning ways and improved his position on the GI Kentucky Derby trail with a gutsy score in Del Mar's Shared Belief S., which offered a total of 50 points towards the Run for the Roses. Breaking sharply from the inside post in this field scratched down to four, the 9-1 shot had all three rivals hot on his tail through a :23.89 opening quarter. GI Santa Anita Derby hero and heavy favorite Honor A.P. (Honor Code) was the first to break ranks, moving up onto the pacesetter's outside hip and was joined by $3.85-million FTFMAR topper Cezanne (Curlin) to his inside as the half-mile went up in :47.93.  Cezanne drew even with his stablemate Thousand Words turning for home and Honor A.P. joined in on their outside. Thousand Words kept on finding in the stretch to maintaining a safe margin on his pricey barnmate all the way to the line. Honor A.P. re-rallied in the final strides to be second, finishing 3/4 of a length behind Thousand Words and a half-length ahead of Cezanne.

Opening his account with a trio of wins, including the GII Los Alamitos Futurity S. and GIII Robert B. Lewis S., Thousand Words checked in fourth behind recent GI Haskell Invitational S. winner and stablemate Authentic (Into Mischief) and Honor A.P. in the GII San Felipe S. at Santa Anita Mar. 7. A well-beaten 11th in the Oaklawn S. Apr. 11, the $1-million KEESEP buy was given a brief freshening and finished second in the GIII Los Alamitos Derby July 4 behind his barnmate and 'TDN Rising Star' Uncle Chuck (Uncle Mo), who was scratched from this test in favor of next week's GI Travers S.

Thousand Words is out of MGSW & MGISP Pomeroy's Pistol, who was purchased by bloodstock agent Mike Ryan earlier this year at the Keeneland January Sale for $475,000. Her 2018 foal by Pioneerof the Nile was born dead and she produced a Hard Spun colt last year. The 12-year-old mare was bred back to the late Arrogate last spring, but has no reported foal for 2020.