Home » Archive » Shared News » This Side Up: Vekoma Points Weaver Towards Fresh Honors

This Side Up: Vekoma Points Weaver Towards Fresh Honors 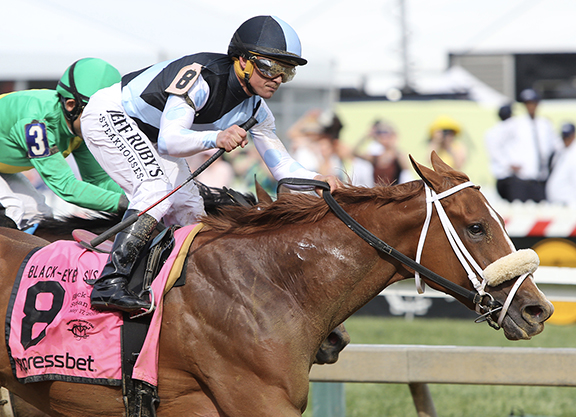 In these contentious times, at least the cavaliers of the turf seem to clinging to suitably knightly ethics. Last weekend, Honor A.P. (Honor Code) and Code Of Honor (Noble Mission) made a righteous stand on either coast; and Saturday's main event, the GI Ogden Phipps S., now adds Point Of Honor (Curlin) to this overflow of rectitude.

In her case, however, the duplication of honors would primarily encompass trainer George Weaver, whose success with Vekoma (Candy Ride {Arg}) in the Carter H. at Belmont last weekend was his first at Grade I level since Lighthouse Bay (Speightstown) in the 2013 Prioress S. (His only previous elite winner, moreover, had been Saratoga County {Valid Expectations} in the 2005 G1 Golden Shaheen in Dubai.) After ending a seven-year itch, then, a mere seven-day wait for fresh laurels would set an unmistakable seal on the steady consolidation of Weaver's status since ending a diligent apprenticeship under D. Wayne Lukas and then Todd Pletcher, another former Lukas assistant, in 2002.

Weaver's consistent Saratoga record speaks of a trainer who can accurately judge caliber, despite more limited ammunition than his mentors. And he has likewise excelled this spring, in a program rendered so much more competitive by its compression, saddling 19 winners from 69 starters prior to Friday.

Vekoma and Point Of Honor, moreover, both attest to a patience and discipline that come at a tougher premium in a smaller barn. Both were taken out of the front line after an exciting start to their sophomore campaigns last year, and are now rewarding the forbearance of their connections.

Vekoma, indeed, is fast becoming one of the most engaging talents in the land. His eccentric gait–hoisting his front leg around like a pitcher on the mound–captured many imaginations on his way to the GI Kentucky Derby last year, and has remained no impediment to two charismatic exhibitions since his return, notably in that 7 1/4-length romp for a 110 Beyer in the Belmont slop last weekend.

By this stage, surely, everyone has grasped that a May 22 foaling in itself presents no disadvantage. The three other May foals in the last Derby were the first three past the post, showing the benefits of better climate and pasture in infancy. One of those, of course, was Code Of Honor–foaled in the same Lane's End barn within 24 hours of Vekoma. In this instance, however, Weaver is clear that Vekoma has filled out during his 11-month absence, saying that he is now “all man.”

I don't know if Vekoma glimpsed Code Of Honor at Belmont last week, but it appears that they may now square up back there in the GI Met Mile. As it stands, Code Of Honor has contributed to his old paddock buddy's only career defeats: they finished first and third, respectively, when Vekoma returned from a three-month break in the GII Fountain of Youth S.; and second and 12th (both promoted) when he derailed in the Derby. On the face of it, given the size of any foal crop, the odds were steeply against the pair treading on each other's toes in this way. But that just shows why you strive for excellence in your program, and in your choices of stallions and farms.

Anyhow, the way Vekoma is thriving now must give heart to those whose porcelain sophomores are limping off the Classic trail this time round. So often the glister of the Triple Crown forces adolescent horses into an enterprise that ultimately proves, in maturity, not to have played to their best strengths. So while Vekoma did win the two-turn GII Blue Grass S. decisively, he is now beginning to shape like a one-turn monster.

Which he's absolutely entitled to be: his pedigree, in contrast with his gait, will satisfy the most orthodox tastes. His dam Mona de Momma (Speightstown) was likewise a Grade I winner in the slop, out of a half-sister to Mr. Greeley (himself, of course, by Speightstown's sire Gone West) as well as to the second dams of Street Sense (Street Cry {Ire}) and Paradise Woods (Union Rags); while their dam, in turn, is out of the European dasher Lianga (Dancer's Image), third dam of the remarkable stallion Danehill Dancer (Ire) (Danehill). That's some page for $135,000.

Point Of Honor will have cost rather more, as a $825,000 RNA subsequently acquired privately by Donato Lanni for John Connelly of Stetson Racing. (Eclipse Thoroughbreds came aboard after her debut.) She, too, is regrouping extremely well after her layoff. Arguably it was no bad thing to be squeezed leaving the gate in the GI Apple Blossom H., as she was at least sheltered from the blood-thirsty fractions set by Ollie's Candy (Candy Ride {Arg}). Getting dragged right into that vortex appeared to leave the last-gasp winner Ce Ce (Elusive Quality) rather hollowed out, when she ran in the GII Santa Maria S., and Ollie's Candy may well face competition up front in her rematch with Point Of Honor.

Even her wild speed palpably held up at Oaklawn that day, so the way Point Of Honor circled the rest of the field gives her every right to carve her name below that of Serena's Song (Rahy) in the storied Ogden Phipps roll of honor. (Albeit she won it, in 1996, in its previous guise as the Hempstead H.).

That champion was one of the most cherished of the young Weaver's charges in his days with Lukas; so, too, was Tabasco Cat who sired Point Of Honor's granddam. So success today would really bring a memorable week to a perfect end. Weaver's barn was picked against illustrious competition, after all, when this filly was among the first horses Connelly sent to the East Coast.

According to George Bernard Shaw, we all have “one main point of honor and a few minor ones.” A horse as freakish as Vekoma would, in fairness, crown many a training career, but this filly is entitled to even the honors. The difference in Saratoga this year will, no doubt, be as melancholy for Weaver as for everyone else. But having gone there last year still seeking the second Grade I of his career, what a consolation if he could head up this time seeking his third of the summer.

This story was posted in Shared News and tagged Belmont Park, Code of Honor, George Weaver, Honor A.P., Horse Racing, Ogden Phipps S., Point of Honor, This Side Up, Vekoma.