Home » Archive » Shared News » This Side Up: Striking Gold Never a Formality

This Side Up: Striking Gold Never a Formality 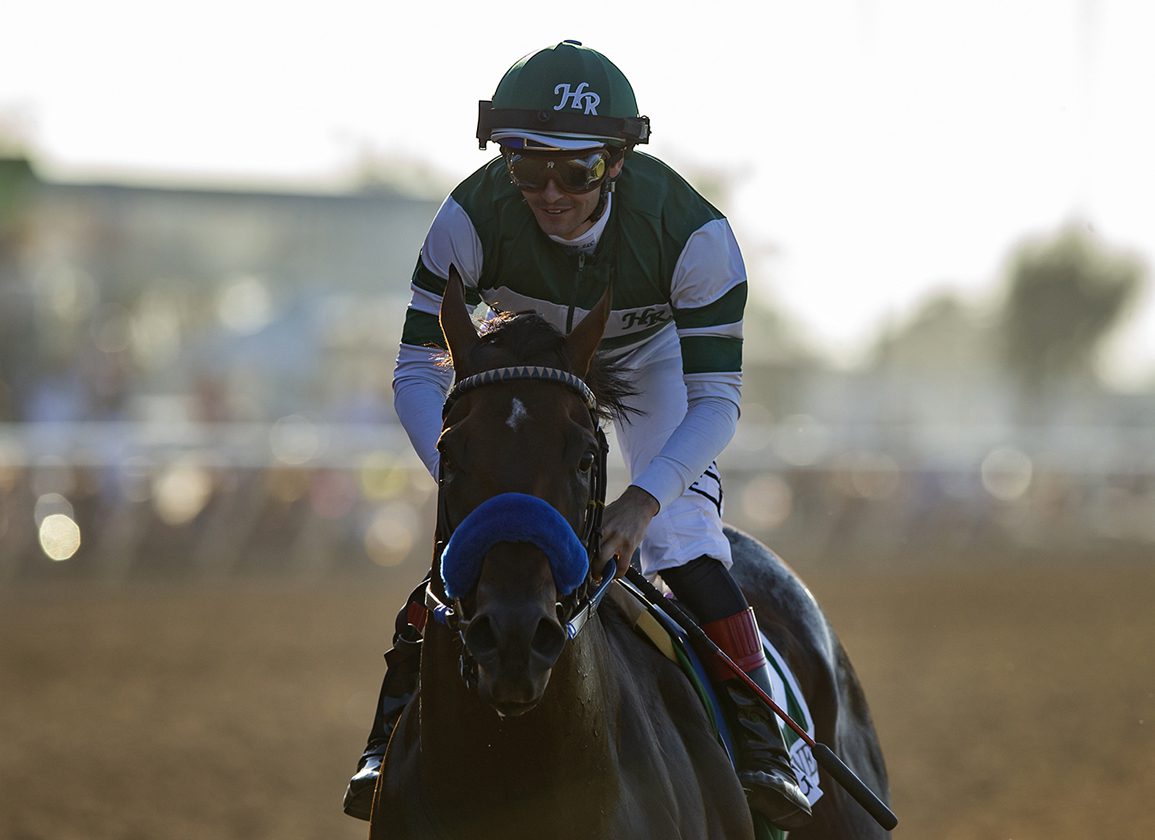 Flightline after his 126 Beyer performance at Del Mar | Benoit

In this business, simply “doing the math” would stop us right in our tracks. Luckily, we have algebra on our side. A daunting equation can always be rescued by that helpfully vague variable, 'x', the unquantifiable ardor of wealthy people: their competitive instinct, their sportsmanship, or simply their outsized egos. At the top of the market, after all, the dollars they spend are not the same as the dollars used by the rest of us to buy coffee or gas. It's not like “real” money at all. But that doesn't mean it can't be subject to a scale of values.

So, to give one example, I shouldn't be at all surprised if the most expensive yearling transaction of 2022 has yet to take place, despite that booming market at Keeneland over the past few days. American investment at the Tattersalls October Sale has been soaring in recent years, and the environment this time round could not be more congenial. Even the biggest domestic investors will be bringing a penknife to a gunfight. Sterling has hit a 37-year low against the dollar and, with the fiscal helm in Britain seized by navigators unorthodox to the point of eccentricity, you couldn't rule out outright parity between the two currencies by the time Tattersalls raises a hammer over several yearlings from the penultimate crop of Galileo (Ire).

And here's another calculation for the rich; specifically, for those prosperous partners privileged to share Flightline (Tapit). If all goes well at the Breeders' Cup, somebody in their decision-making huddle will surely point out that nowadays he has the option of banking the equivalent of around 50 covers, even at his likely fee, with a 110-second gallop in Saudi Arabia. (Conceivably it might even be muttered that the race is scheduled just 11 days into the breeding season.)

From the sidelines, we're all fondly anticipating mass public engagement for our sport if Flightline is permitted to extend his career beyond a sixth start. Even if his owners were to give us what we want, however, there's a scenario in which we might seem impossible to satisfy. What if they ask us to settle for a couple of breakfast broadcasts from the desert, before he rests up and takes in maybe a single prep before the Breeders' Cup? I think our gratitude might soon obtain a rather peevish note.

On some level, those imploring his owners to keep him in training are suggesting some implicit duty to the sport. That feels a little unfair. At the same time, if we are asked to believe that their strategy really won't be governed simply by dollars and cents, then it does at least become a question of the kind of legacy they wish to create from a generational opportunity.

Flightline's stud career is emphatically part of that, too, though let's not forget that even an authentic racetrack phenomenon must start over and prove himself in his second career. For now, it's not as though Flightline could be sensibly proposed as an equivalent wager, in terms of what a breeder should be expected to pay, to Into Mischief.

At 126, Flightline has authored one of just eight Beyers ever recorded at 125 or more. The only horse to hit a higher mark, Ghostzapper (128), is also the only one with any pretension to having maintained his elite status at stud. More typical are the fortunes of the horse with the unique distinction of clocking two of those eight Himalayan Beyers.

In his three final starts, Formal Gold ran 126, 124 (smashing a 40-year Monmouth track record) and 125; he was going into the Breeders' Cup on an irresistible roll when derailed by injury. Yet he would prove a thoroughly anonymous stallion, best redeemed by Semaphore Man, who annually contested the GIII Count Fleet H., aged four through seven, for finishes of 3-2-1-1. After failing to get any of three Saskatchewan mares in foal in 2017, Formal Gold was retired into the best of care but nobody noticed when he quietly slipped away two or three years back.

Now obviously Flightline is a radically different proposition. And not just because Formal Gold, expertly handled by the unsung Bill Perry and thriving on the attentions of Skip Away and Will's Way, stood up to 16 starts in 15 months. Formal Gold cost $62,000 as Hip 1657 at the September Sale; Flightline made seven figures at Saratoga. Alongside his freakish performances, then, he evidently has the genetic and physical wherewithal to make a better fist of his next career.

But even Secretariat notoriously failed to find a male heir. All Thoroughbreds tend to keep us guessing, in some respect or other, and that's never going to change. Certainly I can't buy into the notion that Flightline has fueled the market boom by showing that even really big numbers can be made to make sense. The year he was sold was no different from any other, in terms of the spectrum of outcomes.

It was that September, for instance, that the daughter of Leslie's Lady and American Pharoah made $8.2 million, and there's no need to remind anyone of the tragedy that ensued. That kind of thing can happen to any horse, but it's pretty sobering to scroll down the other top prices paid at that auction. They were obviously well assessed, physically, because most have made the racetrack. But while Malathaat (Curlin) has proved a million bucks very well spent, and there have been moments of excitement for the likes of Spielberg (Union Rags) and Overtook (Curlin), suffice to say that there are some pretty expensive geldings pottering around out there. 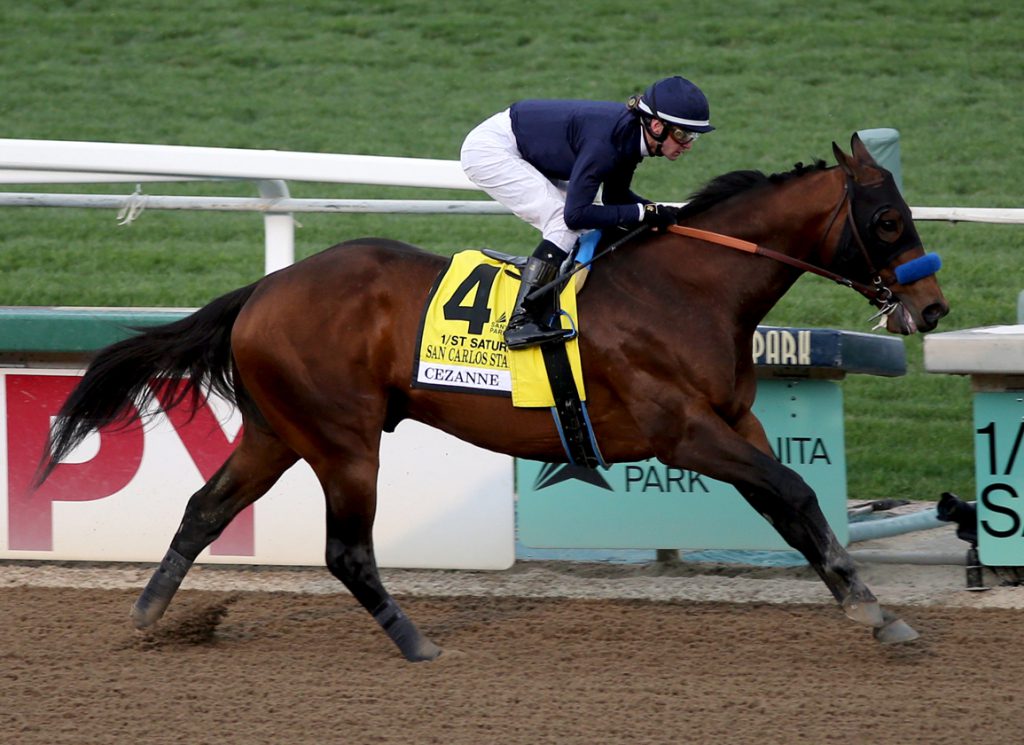 The late Cezanne in March | Horsephotos

Another of the headline scores of the 2019 bloodstock market was the $3.65-million Curlin colt that topped Fasig-Tipton's 2-year-old sale at Gulfstream. I was extremely sorry, this week, to read that Cezanne's various travails since had reached a fatal nadir in a fungal infection. He will duly remain an unfinished masterpiece, albeit even he managed two more starts than Flightline to this point. Cezanne's whole story has proved a very poignant one: most obviously, as the parting bow of Jimmy Crupi, but also given the premature loss (through colic) of a dam from one of the most brilliantly curated families in the book.

Cezanne had shown sufficient flashes of brilliance to merit a chance at stud and, this business being what it is, he would have started with the same blank slate as will Flightline. So we can never know, from one day to the next, quite when a Thoroughbred has achieved its definitive value.

As such, in enjoying a loaded GI Pennsylvania Derby on Saturday, perhaps we should cast our minds back to the 1996 running when Formal Gold was turned over at short odds. In the event, it proved that he had barely started. Maybe that can still prove true of Zandon (Upstart), in which hope I'm clinging stubbornly to the wreckage after his championship credentials took a battering in the GI Travers.

To me, he looked like a horse in some kind of discomfort that day, the way he carried his head turning in, and I refuse to forget the way he glided into contention on the first Saturday in May. For such a baffling Derby, it is turning out to be a pretty good one, and yet there was a moment when Zandon looked in a class of his own.

His equation still has that 'x' element, and maybe his new jockey will discover its true value. You know, I might even stake a dollar or two out of my grocery budget.