Home » Archive » Shared News » This Side Up: Sparkling Rings Required For Bachelor Engagement

This Side Up: Sparkling Rings Required For Bachelor Engagement 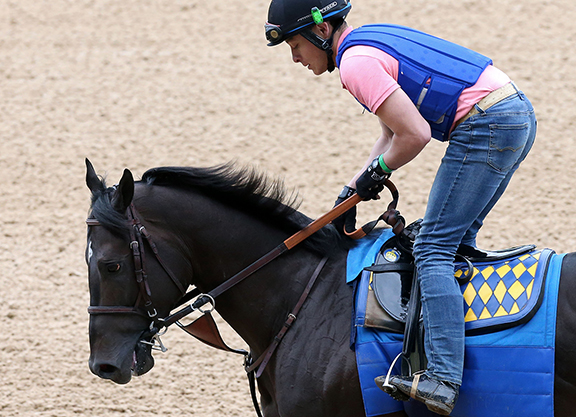 Even Richard Wagner would have struggled to make anything of this particular “ring cycle”.

In four starts, Eight Rings (Empire Maker) has so far abruptly alternated the full works–strings, horns, kettle drums–with a timid clink of the triangle. As such, he certainly can’t afford to break the cycle when surfacing for the first time since his Breeders’ Cup bust in the Bachelor S. at Oaklawn Saturday.

Dropping in grade and distance, in fact, he needs to produce the dominant sophomore performance of a day that also features a new stakes race, over at Gulfstream, to assist a hapless crop that finds itself all dressed up with no place to go.

No place, that is, besides Hot Springs. Arguably the GI Arkansas Derby next weekend will be much closer to a substitute ‘Run For The Roses’ than anything Churchill might contrive in September. For now, however, Eight Rings himself just needs to regroup.

On the face of it, he was presented the GI Breeders’ Cup Juvenile on a silver platter after Dennis’ Moment (Tiznow) stumbled out of the gate. The betting had billed the race more or less as a match, but Eight Rings failed to profit from his rival’s misfortune and could only manage sixth of eight.

Hardly what Coolmore had bargained for, in sealing a deal to stand Eight Rings just days previously. We know how they like a champion 2-year-old at Ashford: Classic Empire (Pioneerof the Nile) had been the sixth to enter the fold in eight crops. (The only exception, aside from the tragic Shared Belief {Candy Ride [Arg]}, was Nyquist–who had in any case vindicated the strategy, as a graduate of Uncle Mo’s first crop). Curiously enough, Eight Rings had precisely emulated Classic Empire when likewise hot favorite for his first Grade I race: each discarded his rider by veering early, Eight Rings at Del Mar and Classic Empire at Saratoga. Both then put things right in blinkers next time, only for their paths to fork at the Breeders’ Cup.

Eight Rings already had a whole alphabet soup of powerful owners before Coolmore jumped in; and obviously he represents a barn that had just sent a second Triple Crown winner to Ashford in four years. Bob Baffert has meanwhile disclosed as strong a Classic hand as ever–those flourishing in the absence of Eight Rings including Authentic (Into Mischief), Charlatan (Speightstown) and Nadal (Blame)–so all parties must have been comfortable with the standards against which they could value the colt. So whether or not Eight Rings can ultimately fulfil his potential, he simply has to have a ton of natural talent.

He has been going that way, at any rate, since returning to the worktab. His last serious breeze before leaving Santa Anita was six furlongs in 1:11 flat; and he limbered up on arriving in Hot Springs with five furlongs from the gate in :59 flat (both times unmatched on the day).

With the Classic program postponed, Baffert still has every opportunity to stretch out this speed, should that still seem the way to go after Saturday. Either way, however, as a traditionalist I’m delighted to see Eight Rings returning in a sprint. Having done so a few weeks ago, I won’t reprise the litany of past champions whose trainers would routinely set up two-turn campaigns in this way. But this is absolutely the classic formula for sharpening a horse, physically and mentally, without damaging the fitness base.

Eight Rings won a sprint maiden on debut, but his Grade I success, gate-to-wire by six lengths, came at 1 1/16 miles. And he’s by a GI Belmont winner.

Since we last saw him, of course, we have grieved the death of Empire Maker–whose most accomplished son at stud, Pioneerof the Nile, had already been a premature loss. So while Ashford’s conveyor belt of champion juveniles includes Pioneerof the Nile’s outstanding runners American Pharoah and Classic Empire, Eight Rings does now have an especially precious chance to extend the legacy. (He belongs to Empire Maker’s first crop following his repatriation to Kentucky).

One thing is for sure: if he can seize that opportunity, it will reflect well on his late sire. Because while first and third dams both had graded stakes success, that is about as good as it gets for the pedigree of Eight Rings. His first four dams are by Pure Prize, Kissin Kris, Baederwood and Bold Monarch. But then we know Coolmore doesn’t always insist on a deep family and those names are no less distinguished than Yankee Gentleman, Ecliptical, Tri Jet and Crozier, who fill the same slots in the family tree of American Pharoah.

Purely Hot, the dam of Eight Rings, once carried a $4,000 claiming tag at Penn National but eventually won a dozen times, including a Grade III sprint on synthetic at Woodbine.

Despite her son’s loss at the Breeders’ Cup, she still realized $1.2-million when sold (with the bonus of a Union Rags cover) five days later at the Keeneland November Sale. (WinStar, who had meanwhile bred Eight Rings and banked $520,000 for him as a September yearling, had picked her up for $250,000 five years previously).

Purely Hot’s sire, a son of Storm Cat (like Yankee Gentleman), has been a versatile influence including for turf and distance; but there will be some nostalgic shaking of heads in Maryland to see Baederwood in the background of a good horse. His eligibility for stud was extremely marginal, but his most able sons, Frugal Doc and Miracle Wood, will be remembered around Chesapeake Bay for 113 and 117 starts respectively. His most accomplished daughter Wood So, winner of three graded stakes at five and six, is the third dam of Eight Rings.

Compare this with the family of Americanus (War Front), an interesting contender for the Unbridled S. at Gulfstream (named, remember, for the sire of Empire Maker). He’s out of Sapphiresndiamonds (Mineshaft), who cost $1.45-million as a Saratoga yearling-a price that still makes more sense than her subsequent failure to win in nine maidens. Her Grade I-placed dam (by Unbridled, aptly enough) is out of a mare by Seattle Slew out of the great broodmare Lassie Dear; while her grandsire A.P. Indy was by Seattle Slew out of Lassie Dear’s daughter Weekend Surprise.

Who can say by what kinks of nature or nurture Purely Hot could turn out a better runner than Sapphiresndiamonds? And, as things stand, she remains the more notable producer too. But a) that’s why this business is so fascinating; and b) you never know how, in future generations, class may percolate back in; or out.

Personally I’m keen to see how Attachment Rate (Hard Run) shapes in this field, as he has so far just looked a little too naïve to figure out how good he might be. As it happens, his dam is a half-sister to the grand-dam of the very exciting Money Moves (Candy Ride {Arg}), their family tracing to Mill Ridge’s celebrated blind mare Begum. Impressive in both his starts this spring, Money Moves was himself eyeing today’s race, but Todd Pletcher has decided to give him a little more time before trying a second turn.

This year, after all, there’s no hurry. Yes, it’s always vexing in horse racing to let any kind of chance pass you by. The Breeders’ Cup Juvenile has so far worked out poorly in terms of the protagonists prospering since. Should Eight Rings bounce back now, you’d have to say he let an Eclipse Award slip through his grasp.

At least we’ll find out today whether he is indeed better–way better, probably–than he looked that day. A bit like Wagner’s music, which the Wyoming humorist Bill Nye famously remarked to be “better than it sounds”.

Nye founded the Laramie Boomerang, which curious newspaper title was named for his mule, who could reliably bring his owner back home, no matter how inebriated when mounting the saddle. So let’s trust that Eight Rings can now take us right back to where he started, too.