Home » Archive » Shared News » This Side Up: Market Goes Back to the Future

This Side Up: Market Goes Back to the Future 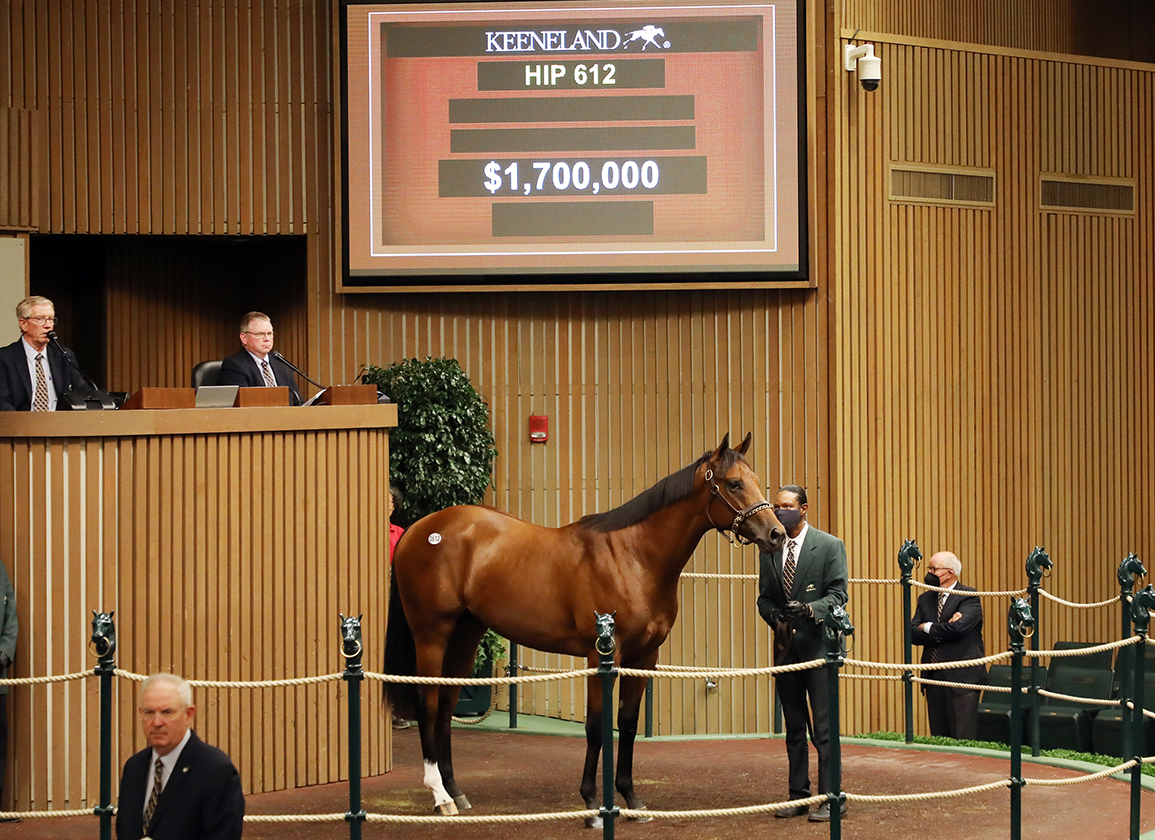 The cyclical nature of our business, from the foaling shed to the race program, invites a length of perspective that can only be of comfort in times of trouble. This, too, shall pass–even a global pandemic. And if COVID disrupted our routines in 2020 as seldom before, with a September Derby and no Saratoga Sale, we appear determined to make as seamless a resumption as its lingering challenges allow.

Now, with a dark day at Keeneland on Friday permitting everyone to absorb a breathless start to the September Sale, it is possible to sharpen our sense of how the market is emerging from the crisis.

This, of course, was an auction that they did contrive to stage last year. While demand proved more resilient than many feared, predictably the sale took a big hit overall, rounding out at $249 million turnover for a $100,000 average, down from $360 million and $126,000 the previous year. But more reliable comparisons, to this point of the sale, are complicated by the fact that the one industry cycle that never quite repeats–paradoxically enough, at a place that so prizes tradition–is the format at Keeneland.

So let's hope that the new Keeneland team, with some extremely acute thinkers aboard, will give their chosen formula a proper chance to bed down. Judging on this week, they have every incentive to do so.

The most pertinent comparisons we can draw, entering the weekend, are with the 2018 and 2017 sales, which similarly presented the sale's best stock over four days, albeit packaged in different catalogs. Now remember that the 2018 sale was a knockout, ending up at $377 million at an average $129,335. This, being a nose ahead of 2019, represented the pinnacle of a bull run sustained through the decade since the banking crisis, thanks to relentless cash doping of the economy (nugatory interest rates, quantitative easing etc). As such, the 2017 sale had also registered a big leap, finishing with $308 million turnover and an average of $120,487, up from $273 million and $97,740 in 2017.

In other words, we are on track to restore the market to just about halfway between its 2017 and 2018 values, when we were approaching the absolute peak of a soaring market.

Now there's obviously still a long way to go. And even as it stands, plenty of individuals will have endured the tough experiences inevitable when you have to roll a sweaty stake to enter what proved an especially selective marketplace in Book 1 (barely half the published catalog both making it into the ring and finding a new home). That said, the hallmark of this week's trade appears to be its solidity and breadth.

One obvious factor is the increasing prevalence of high-end partnerships. Those vendors who resent combination instead of competition are missing the point. Because it's actually far more wholesome, on both sides of the market, for the big spenders to be spreading their risks.

In 2019, seven yearlings made $2 million or more at Keeneland. This year, it looks like we won't have one. But we know that people are spending the same kind of money, and the heart-breaking recent fate of Into Mischief's half-sister by American Pharoah, who topped that sale at $8.2 million, will doubtless comfort investors that they are both reducing their exposure even as they improve their odds of landing an elite runner. Many have evidently decided that to own only a leg in a future stallion represents a worthwhile sacrifice of ego in so precarious a business. And a wider spend, as we've seen this week, can reach very small consignments with life-changing results.

But the real key to this market may be a little simpler. While COVID has been a financial catastrophe for many households, some of the investors who drive our business are more affluent than ever–and they also have a renewed sense that life is for living. They have been piling up the cash, and don't want to sew pockets into a shroud.

That being so, it is vital that we give such people maximum confidence in our industry. And, in reality, the bloodstock market's buoyancy is menaced by many a needle.

The most perilous, of course, is literally that–and found on the end of a syringe. Commercial breeding for the ring, and not the racetrack, is another big problem. Then there's the foal crop, down again; unlike the volume of racing, which threatens a vicious circle via wagering disengagement. Even as Keeneland buzzed through its fourth session, moreover, Shadwell quietly announced the streamlining review feared since the loss of its founder Sheikh Hamdan earlier this year. The same Shadwell, that is, that topped spending at this sale in 2016 and 2017, and finished behind only Godolphin (owned by the late Sheikh's brother) in 2018 and 2019.

So none of us should be complacent in the perennial allure of the Thoroughbred. At the same time, we are entitled to take heart from the impetus behind the latest cycle this week.

How exciting, for instance, to see a 4-year-old Horse of the Year launch such a first crop of such startling precocity. After achieving a higher average this week than Tapit, War Front, Medaglia d'Oro and Uncle Mo, Gun Runner has the chance of a fifth graded stakes winner Saturday when Gun Town contests the GIII Iroquois S.–and the first starting points for the 2022 Derby.

Hope springs eternal! So begins another of those cherished, recurring cycles, by which we both take our bearings and also learn to transcend the narrow outlook of our own time and place. That's one of the reasons I love the statues unveiled at Churchill this week of Colonel Matt Winn, who died in 1949, seated in conversation with the late John Asher, who was born in 1956. Magnificent work as usual by local sculptor Raymond Graf and, in this instance, literally timeless. Good years, bad years, nothing lasts forever. And this, as a moment frozen out of time, might help to remind us that taking the long view actually boils down to living for the day.