Home » Archive » Shared News » This Side Up: Lights Go Green For a Quick Drive

This Side Up: Lights Go Green For a Quick Drive 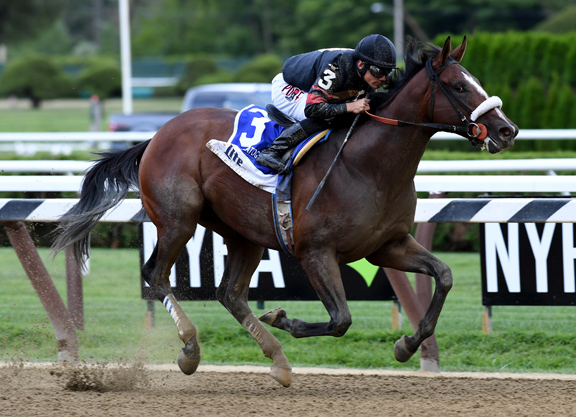 For better or worse, we're all products of our environment. Better, plainly, in the case of Jimmy Jerkens and Wesley Ward–both raised by exemplary practitioners in a trade that this weekend sees each send a gifted sophomore dashing round a single turn.

Each of these trainers, of course, has long stood on his own two feet. So we'll wait and see how much flexibility Jerkens may consider latent in Green Light Go (Hard Spun) after he returns in the Roar S. at Gulfstream Saturday. Sprinting, after all, could yet turn out to be this colt's metier. On the face of it, however, this does look just the kind of old-school relaunch that might have won the approval of the late Allen Jerkens. For while 'The Chief' was one of a kind, it was standard practice in his heyday to sharpen the focus and fitness of a fresh horse round one turn.

Whether Thoroughbreds of that era were inherently more versatile is rather a chicken-and-egg question. If we no longer ask them the same questions, they can't give the same answers. Prove Out broke the seven-furlong track record at Saratoga on his first start after joining 'The Chief'; and ended the campaign running two miles, in the Jockey Club Gold Cup, faster than any American Thoroughbred bar Kelso.

In between, Prove Out had famously beaten Secretariat in the GI Woodward S. That day, he was making his fifth start in five weeks since joining the Jerkens barn, which gives rise to a similar question. If the consensus today is that horses are less robust, is that partly because they are campaigned more timidly?

I suspect that the main reason we won't see a horse like Prove Out in the 21st Century is that we only saw one in the 20th. But then not many foals today could remotely approach the substance and historic resonance of his parentage: by Graustark out of a sister to Assault.

Anyhow, to return to Green Light Go, a three-month absence since the GIII Swale S. suggests that his dull performance had little to do with the nature of that assignment. In fact, he dropped off the worktab soon afterwards, with a fever, but appears to be breezing with renewed brio now.

To be fair, even the bare form has turned out to be solid. The winner Mischevious Alex (Into Mischief) followed up in the GIII Gotham S., while Shivaree (Awesome Of Course) again finished runner-up in the GI Florida Derby. He got the same view of Tiz The Law (Constitution) there, of course, as did Green Light Go in the GI Champagne S.–when for some reason sent into the lead for his first attempt at a mile.

But Green Light Go has to figure out that gear-shift today. On the one hand, the postponement of the GI Kentucky Derby has given him a second chance to get onto the Classic trail. Equally, he could just gun straight over that crossroads. His dam, after all, parlayed the genes of her doughty sire Pleasantly Perfect into second place in the GI Prioress S. over six furlongs; and his second dam was another stakes-winning sprinter.

It's not as though sprinting was a more obvious destiny for Four Wheel Drive (American Pharoah), who resurfaces at Churchill Sunday. His sire's iconic dirt achievement certainly did not confine Coolmore's ambitions to make him an international influence, much as its founders did Northern Dancer. And if his versatility extends not just to grass, but to sprinting on grass, so much the better. In terms of his commercial profile, then, Ashford must have been delighted to see Four Wheel Drive sent to Wesley Ward, who had already served their own cause so well.

Ward's father Dennis has never handled horses of the quality that allowed Allen Jerkens to demonstrate his Hall of Fame talent. But he has trained over 1,000 winners, and his presence–however incongruous, in the garb of an Edwardian aristocrat–must have made Ward all the prouder on the day of his ground-breaking first success at Royal Ascot in 2009.

Would any other trainer have turned Four Wheel Drive into a machine fast and precocious enough to make all in the GII Breeders' Cup Turf Sprint? Well, quite possibly: his dam won a five-furlong stakes at two, while Gary Contessa saddled another colt by American Phaorah to finish third. Nonetheless, we know Ward's trademarks. We know what to expect of his juveniles at Keeneland in April; and we know that his sprinters reliably leave Europe's fastest gasping in their wake.

But that's why we should never forget the extraordinary performance of Ward's 3-year-old Con Te Partiro (Scat Daddy), when she careered from 24th to first over the straight mile at Ascot in 2017.

Because we know that certain trainers reliably develop a certain type of horse. Sometimes, they become a victim of their own success; they find themselves undeservedly pigeonholed. Often, however, it's their own doing.

The potential of each Thoroughbred is too idiosyncratic for a one-size-fits-all template. Typically, “the old school” refers to the conservatism and inflexibility of an ageing generation. On the racetrack, however, these were trainers who were bold and imaginative in assessing the capabilities of each horse.

To be fair, the next generation has asked few bolder questions of the Thoroughbred than did Ward in first going to Ascot. But the whole landscape has changed.

Before the era of the “super-trainer,” even the most celebrated conditioners had stables that did not stretch their personal attention. And even the best stallions might only have had three dozen mares. (Boy, would those mares merit their privilege. As, say, a sister to Assault ….) Now, whether racing or breeding, we constantly hear that “it's a numbers game.”

So if horses today don't have the versatility of the Prove Out era, then maybe it's not just about the gene pool. We've still got nurture, as well as nature; still got individual Thoroughbreds, as well as a breed.