This Side Up: Happy Days Here Again 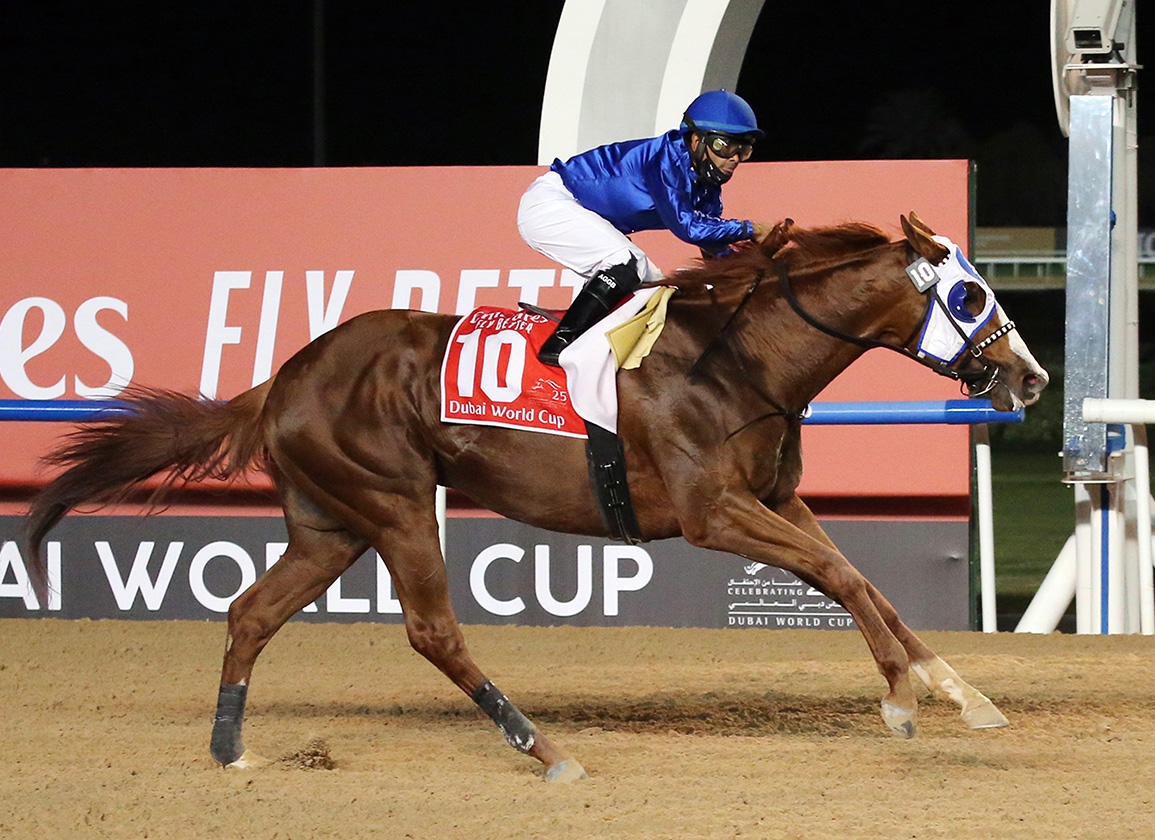 A year that began with the loss of two of the most lavish, Prince Khaled Abdullah and Sheikh Hamdan al Maktoum, is aptly measuring the reinvigoration of the breed achieved by modern investors from the same deserts where it first took root. Godolphin owes Derby wins at both Epsom and the Curragh to colts by Prince Khaled's greatest bequest, Frankel (GB); while its U.S. division laid down a marker of continuity and vitality when Mystic Guide (Ghostzapper) won the G1 Dubai World Cup just three days after its founder's brother was laid to rest in a nearby cemetery.

While Sheikh Hamdan's own bloodstock empire, Shadwell, begins to evolve its future strategies under his daughter, Sheikha Hissa, its American arm has been emulating the momentum of Godolphin. (That stable, remember, may be headed by Sheikh Mohammed, but Sheikh Hamdan contributed significantly to its development). Both have a Classic winner apiece, in Malathaat (Curlin) and Essential Quality (Tapit), while last Saturday both also won Grade II prizes within barely an hour, Zaajel (Street Sense) in the Mother Goose S. and Maxfield (Street Sense) in the Stephen Foster S.

Malathaat and Zaajel attest to the wisdom of the choice made by Sheikh Hamdan last year, on the retirement from training of Kiaran McLaughlin. Todd Pletcher increasingly has the look of the safest pair of hands in the country, having meanwhile also been selected by the powerful owners of Life Is Good (Into Mischief), Country Grammer (Tonalist) and Following Sea (Runhappy) as sanctuary from the Bob Baffert storm.

As we've remarked before, Pletcher remains closer in age to Chad Brown and Brad Cox than to Baffert, and certainly has many miles left on the clock relative to the achievements that secured him the Hall of Fame in his first year of eligibility. It's good to see the holder of a record seven Eclipse Awards reminding his younger rivals, who won the last five between them, that he remains a master in his prime.

Pletcher has already produced a juvenile to set the pre-Saratoga standard in Double Thunder (Super Saver), last-to-first winner of the GIII Bashford Manor S. last weekend after pardonably gasping through an opening quarter of :21 flat. Now he saddles another son of Super Saver, the unbeaten Happy Saver, as the obvious danger when Mystic Guide makes his first appearance since Dubai in the GII Suburban S. at Belmont Saturday.

With Double Thunder scoring on the same card as Mexican sensation Letruska, Super Saver is certainly having one of those finger-wagging spells we know to expect from exported stallions. His sale to Turkey at the end of 2019 was announced the same day as that of Daredevil, who promptly earned repatriation with a GI Kentucky Oaks one-two and a GI Preakness S. success. But Super Saver, being five years older, is presumably gone beyond recall.

It must be tough for the guys at WinStar–who of course bred Super Saver, as well as Double Thunder–to see the caliber of stock left behind by both stallions. But it wasn't really WinStar who exported Daredevil. The market did. That spring, he had received just 21 mares. And while Super Saver did manage a book of 136, the wind had meanwhile turned against him. At the yearling sales, his median sank from $75,000 the previous year to $28,500: pretty disastrous, against a $50,000 conception fee. Daredevil, after all, had himself covered 140 mares only the previous year. Once the commercial market pulls that plug, it's damned hard to push it back.

Be all that as it may, it's heartening to see Runhappy recovering so persuasively from a slow start with his first crop; and let's hope that Happy Saver can also go on and give himself a real chance at stud. Because it certainly feels important that Super Saver has heirs recycling his genes in Kentucky: besides extending the precarious branch of the Raise A Native line through Majestic Prince, he also represents a noble Ogden Phipps family.

(Another of his sons, incidentally, had a Chilean Group 1 winner last weekend. Competitive Edge was moved on from Ashford last year, with only a second crop of juveniles on the track, but stands in the top 10 third-crop sires and duly remains entitled to thrive at his new base in Texas).

Happy Saver, homebred by the Wertheimer brothers, doubles down his stud potential by introducing none other than Weekend Surprise as his third dam. (Her son A.P. Indy, remember, is Super Saver's damsire). So there was a real premium on that fast-track Grade I success last fall, when Happy Saver beat Mystic Guide in only his fourth start in the GI Jockey Club Gold Cup.

Those of us who treasure the heritage of races like the Suburban will be anxious to see this rematch restore due resonance to annals formerly crowded by many of the most evocative names in the American breed: from the likes of Ben Brush, Imp and Beldame, in the old Sheepshead Bay days, to a golden sequence in the 1950s and 1960s encompassing Tom Fool, Nashua, Bold Ruler, Sword Dancer, Kelso, Buckpasser and Dr. Fager. Let's hope that a race relegated to Grade II status in 2009 can redeem its lack of quantity with some authentic quality.

Those glorious old names remind us again how the world has changed, with horses today often bred and trained like porcelain. A wearily familiar complaint, perhaps, but one that needs reprising on a weekend when the G1 Eclipse S. in Britain drew four starters and the GIII Los Alamitos Derby had to be reopened. What a pleasure, then, to see throwback Firenze Fire (Poseidon's Warrior) tackle another significant new recruit to Pletcher's barn, Mind Control (Stay Control), in the GII John A. Nerud S. on the Independence Day program.

Firenze Fire has won 14 of 33 starts in compiling just short of $2.5 million. Yes, he started out with a trainer who has some fast talking to do, if he is not to become a lasting shorthand for much that is wrong with our sport. But the horse has found wholesome rehabilitation with Kelly Breen, becoming another real feather in that snap-brim fedora over the cheerful face of New Jersey racing. Breen has favored the veteran sprinter with the first real break of his career, and brought him back as good as ever in his fifth campaign. Round a circuit he adores, maybe Firenze Fire can remind seven-for-20 millionaire Mind Control that he is, by comparison, only just getting going.

It's a striking showdown, for sure: between a former steam-fitting apprentice who learned the ropes under Mid-Atlantic stalwarts like Ben Perkins, Sr. and John Forbes, and the meticulous interpreter of the D. Wayne Lukas revolution who put the “super” into the “super trainer” concept–with notably apt dividends when Super Saver won the Derby.

It wouldn't be too hard to choose between Breen and Pletcher, if you were casting the roles of snappy dresser Fonzie and clean-cut Richie Cunningham. But, however the script unfolds between them, at least the holiday weekend offers us horses and horsemen alike eligible to restore something like Happy Days.