Home » Archive » Shared News » This Side Up: Fee Cuts Can Reboot the System

This Side Up: Fee Cuts Can Reboot the System 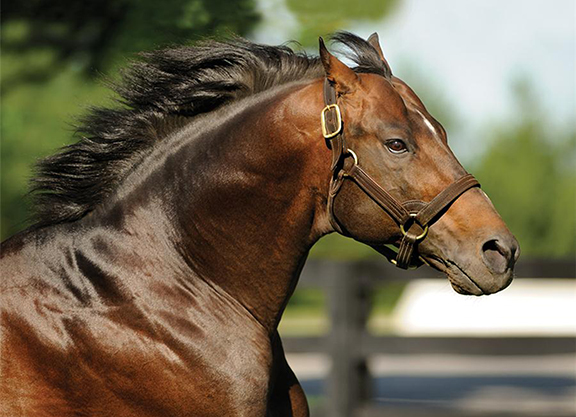 As we have come to expect, in a trading environment that nowadays owes so much to their boss, it was the guys at Spendthrift who first put their heads over the parapet.

This week, anyway. To be fair, the original lead actually came from Chuck Fipke–a match for the unorthodoxy and initiative even of B. Wayne Hughes, and prepared way back in the spring to waive his 2020 stallion fees altogether.

Fipke reasoned that his entire pitch was to small breeders, who were already looking down the barrel as the pandemic took hold; and also that he owned his stallions outright, duly having no responsibilities to shareholders. This week, however, Spendthrift became the first in a rapid series of big farms to grasp the nettle with some extremely purposeful fee cuts, at every level, for 2021.

It's a fascinating situation, because you could argue that stallion fees have in recent years ceased to make sense from either side. For those breeders who must retrieve costs in the sales ring, the commercial imperative to use only new sires tends to require them to spend far too much on unproven potential. For farm accountants, equally, the window of opportunity is so narrow that corralling adequate books even into years two and three is becoming harder and harder; so much so, that even exorbitant opening fees may not square the ledger.

But now they have no alternative but to lead their stallions out to the crossroads and help the breeder save on gas. Our business operates in unalterable cycles, initiated by the choice of a stallion. His fee sets the bar of viability for every project. Add keep and labor–which, in contrast, scarcely vary whatever the value of your mare–and you'll have your break-even number.

That's how organically everyone is connected. And that's why the guy setting the fee must read the marketplace for young stock, and give all parties the chance to come out ahead. Because he or she will need them to retain the funds and morale to do it all again. That's why John Sikura, who views the big picture as dynamically as anyone in the business, was at such pains in pricing the Hill 'n' Dale roster to stress that “we are all in this together.”

And let's not forget how slowly the wheel turns. At a time like this, that's actually a comfort. Following a bereavement, I haven't been ringside at the Tattersalls October Yearling Sale until the past couple of days, but the staggering resilience of the market there has been most instructive. Everyone, pending the promised land of vaccines and cures, shares the same misery over COVID and its indefinite span. But the breeding and trading of Thoroughbreds tends to develop in our insular, eccentric community–even in the pinhooker, fluttering from flower to flower–a patience and perspective that could, for once, be usefully emulated out there in the “real” world.

The reality is that plenty of horsemen made good money out of a bull run extending a decade since the last big market shock. If they can now tough out a couple of lean years, they will surely keep faith in a system that has served them so well. After all, they can't just leave those horses chewing grass out there. And they have been broadsided, out of nowhere, by something completely unaccountable and extraneous. As and when they get back on an even keel, they know they have the maps and compasses to chart a sustainable course.

And that's without admitting to ourselves that our business is exceptionally well positioned, should economic recovery be neither V- nor U-shaped but, as we increasingly hear, K-shaped. Trading in luxury goods, horsemen rely on “trickledown” from the most affluent in society. Among that class, even so, perhaps at least the old-school paternalists–a type of conservative often drawn to the Turf–will seek nothing more precious from the next four years, tax breaks included, than a little more political and social stability. Because we are, indeed, all in this together.

At every level of the industry, these fee cuts can trigger a communal reset. It boils down to a single word: opportunity. As I keep saying, the great harvests of capitalism are often sown in the thinnest soil. This winter, once again, we'll be running a value check across all Kentucky stallions–and already we're salivating over some of the fees announced this week.

Some prospectors may even resolve to invest in mares to take advantage. No sector of the market demands more patience, of course, than breeding stock. But you can guarantee that we'll look back, a few years hence, and discover that many a top-class racehorse was bred from mares more or less “stolen” from the forthcoming sales.

Ah, racehorses! Remember them? There could be no more wholesome corrective, out of this crisis, than restoring our focus to the racetrack; than renouncing this addiction to the self-fulfilling, artificial values that begin and end on a sales rostrum.

In fact, whisper it, but it might be no bad thing for the commercial market to falter long enough for breeders to abandon these fast-buck stallions, scarcely any of which will ever again command so high a fee, for the kind of yeoman achievers that might build up a family with a few rosettes on the track instead. We will all have our different favorites, but already know that many will be priced to make that a very far-sighted strategy.

Hindsight may also show us, of course, that one or two weanling colts selling this November will eventually figure among the first stallions confined to 140 mares. That will certainly set a new puzzle to those careworn farm accountants. On the other hand, perhaps by then people will have grasped that breeding animals that can actually run ultimately makes more sense than wiping out families in pursuit of fleeting commercial gain.

It's an ill wind, as they say, that blows no good–and that applies even to the tempests of 2020.