Home » Archive » Shared News » This Side Up: Back to Front Keeps the Breed Moving Forward

This Side Up: Back to Front Keeps the Breed Moving Forward 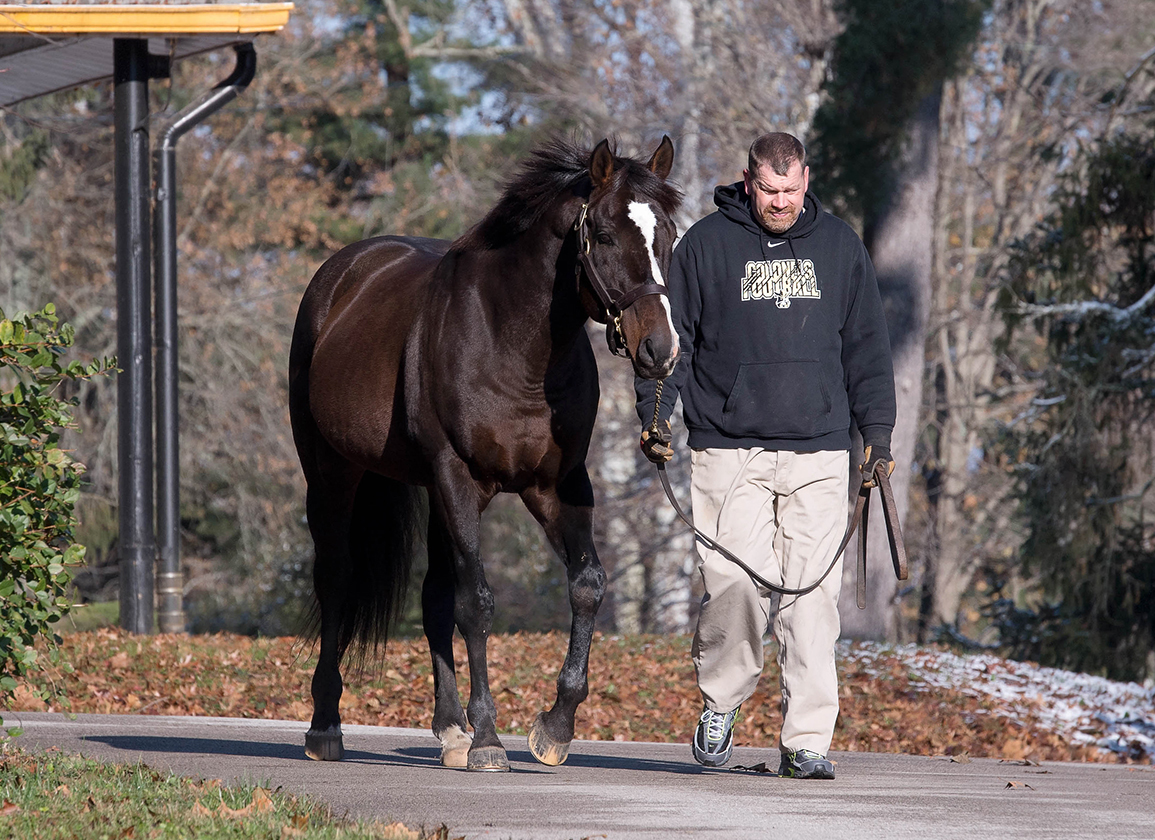 He really had to earn his stripes, his farm resorting to pretty desperate measures to keep him in the game as his early books dwindled along with his fee. But he has long since vindicated (as well as virtually trademarked) that farm's management style, evolving into one of the great stallions of our time–a status on which he set a formal seal last weekend with his 100th stakes winner. And his name is… Into Mischief.

Or is it? Hang on a minute. Syllable for syllable, you can say exactly the same about another modern colossus. Right down to reaching that landmark of 100 black-type winners, last weekend. And his name is… War Front.

Now neither of this pair requires any publicity, and we're all familiar with their significance as influences on both the breed and the business. But with Into Mischief already looking booked for what is becoming his routine end-of-year salute, as champion sire, I do feel that War Front merits a particular celebration for the manner in which he has reached this mutual milestone. For we must beware, as he enters the evening of his career, of taking him at all for granted–especially because, in a commercial environment shaped in the wildly contrasting image of Into Mischief, he is such a throwback.

That description has a dual application. First of all, he foreshortens the genetic connection to venerable influences elsewhere diluted, increasingly and inevitably, with each passing generation. Not just because he was conceived when the mighty Danzig was as old as 24, but also when you see the names seeding the bottom line: second dam by Forli (Arg), third dam by Round Table. Momentous names, these, in the Claiborne story! Not least as broodmare sires: Forli's daughter Special, of course, was dam of Nureyev and second dam of Sadler's Wells; while Round Table, famously foaled the same night as Bold Ruler, was damsire of Caerleon and Topsider.

But War Front, this genetic time capsule, has also conserved something that feels no less precious in the industrial age of commercial breeding. In 2020, Into Mischief covered 248 mares. War Front was confined to 67. Yes, that is partly because he's meanwhile approaching his 20th birthday; and, with his longevity in mind, access will increasingly be restricted to established friends of the Claiborne program. Even in his pomp, however, War Front was never one who could breed more than twice a day. But that physiological functionality just confirmed him a bespoke fit for the farm, and his peak books settled at little more than 100 mares.

“By our calculations it looks like War Front was fourth fastest to 100 stakes winners, by amount of foals,” says Walker Hancock, the Claiborne president. “First was Danzig, second Sadler's Wells, third Danehill. That's obviously a very impressive list and to see him among those names says an awful lot.”

Among stallions of today, not even Tapit, whose consistency is extraterrestrial, can match any of these strike-rates (albeit he comes mighty close in stakes performers). And there are plenty of other stallions, charged out at big money, who find themselves outright embarrassed by comparison.

By keeping such a tight control on supply, moreover, Claiborne have always sought to ensure adequate demand to look after their commercial clientele. Even an ordinary individual by War Front will be something of a collector's item in the sale ring and, as such, should redeem his fee. In fairness to the higher-output farms, who operate a very different system with equal flair, the top stallions sustaining monster books do typically maintain a viable yield (even by median, never mind by average) despite that pressure. Different models work for different farms and different breeders, and if Claiborne have an old-school program, then the same goes for their manners. They're not out to criticise how anybody else goes about a very challenging business; they're just happy that conservative books work for them, and for their patrons.

That said, they do have one other traditionalist hallmark that I really hope will put them ahead of the curve, in years to come. Because this farm has always been a two-way bridge between the gene pools of Europe and America, and War Front has contributed to that tradition as one of the only Kentucky stallions to penetrate the insularity of European breeders over the last couple of decades.

His success over the water is consistent with the crossover influences in his own pedigree: Danzig himself, for a start, gave us international phenomenons Danehill and Green Desert; while we've already noted Argentinian turf champion Forli behind two champion stallions in Europe. But don't forget that Round Table, often suggested as America's greatest grass horse, also owned track records in dirt races as resonant as the Santa Anita H., Hollywood Gold Cup and Blue Grass S. Yes, War Front's damsire Rubiano is a sibling to the dam of Tapit, but don't forget that their mother was by Nijinsky.

All old news, for sure, but an auspicious context for the candidature of War Of Will–as the son of a Sadler's Wells mare–as a potential heir to his sire for Claiborne. Because someday, as I never tire of predicting, the gene pools either side of the ocean will become so shallow that those standing sires of transferable class will gradually find themselves answering urgent commercial imperatives.

It would be apt for Claiborne, once again, to serve as nexus for that kind of process. The latest Hancock at the reins is certainly eager to cover all bases, in terms of racing surface.

“That's what were really trying to focus on here, lately,” he says. “We have War Of Will and Catholic Boy both as Grade I winners on dirt and turf. It's such a global business now and you've seen how War Front has become an international presence, he now even has a Grade I winner in Australia as well. Going forward, I think it's going to be so important that stallions can be marketed for that kind of international influence.”

Tellingly, this spring Claiborne permitted War Of Will a book unprecedented in its history, at 144 mares, for his rookie season.

“We really hope he can carry on his sire's legacy,” Hancock says. “He looks just like him, only a bigger size model. If there has been a critique of War Front, it was maybe that he could get a slightly smaller, turf sprinter type. Nobody needs to worry about that with War Of Will, who of course carried that War Front speed to win a Classic on dirt.”

Hancock counts as many as a dozen sons of War Front who have already sired stakes winners, so the domestic line looks more secure now than it did when the patriarch himself reserved his final heirs until so late in the game. Certainly War Front and Hard Spun rebuke the widespread but self-fulfilling mistrust of ageing stallions, Hard Spun not being conceived until Danzig was 26.

One thing is for sure, nobody will panic if War Of Will should happen not to prove an overnight sensation. Into Mischief was in such straits, early on, that Spendthrift had to buoy him up with an innovative program named Share The Upside. The revolution that began that day will survive the sad loss this year of the man who inspired it, not least with a young son of War Front as brilliant as Omaha Beach now on the roster.    Nonetheless it's gratifying to see that other farms can still make it work to keep the faith with the old ways, too.

Hancock wryly recalls how Claiborne's Bernie Sams had to fight War Front's corner when he was cut to $10,000 in advance of his first juvenile runners. The rest is history, that first crop having included Declaration Of War, who won the G1 Queen Anne S. the same day that War Command won the G2 Coventry S. by Royal Ascot by six lengths. Both, like their sire, were homebred by Joseph Allen; and both helped to persuade John Magnier and his partners in Coolmore that War Front speed offered a potent outcross to all their Sadler's Wells blood.

“I think Bernie is going to get that letter framed, that he sent out basically begging people to breed to War Front,” Hancock remembers. “Those first books were small not by design but because that's what the market decided. He was a little smaller of stature, he wasn't a Grade I winner. But we were saying how much we liked his foals, how he was just like Danzig, and that he just really needed some help here. Obviously once he took stride, and had that coming-out party at Ascot, from there he shot to the moon. But in this era of big books, for someone to reach this milestone from so few foals is something you might not see again for a long time.”

True enough. Too true, in fact. All credit to his farm for showing that it doesn't have to be that way.

This story was posted in Shared News and tagged Bernie Sams, Chris McGrath, Claiborne Farm, This Side Up, Walker Hancock, War Front, War of Will.