Home » Archive » Shared News » This Side Up: A Very Different Experience-but Euro Strategy Same as Ever

This Side Up: A Very Different Experience-but Euro Strategy Same as Ever 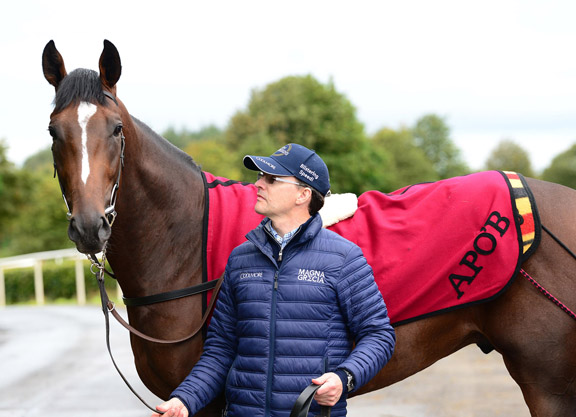 It's the baby I can't get out of my mind, try as I might.

Maybe you feel it shouldn't have been out at all, on such an evening and in such a place: sitting there in its diaper, on a table, under the adoring smiles of the good-looking couple who had brought it into the raucous bar. But then the infant looked very much at home, alternately raising a glass of bourbon and a cheroot to its lips.

Only in L.A.; only on Halloween. On closer inspection, of course, the baby proved to be a doll and its precocious addictions automated. But Hollywood was only down the road, and its proud “father” explained that he was a professional. He created life-like dummies for the kind of roles that cause actors to become a little testy with their agents, like being blown up or run over or pushed off a cliff.

His Halloween stunt was plainly in pretty appalling taste, but the traveler needs an open mind and it was fun to hang out for a few minutes. This, after all, is just the kind of thing that makes Breeders' Cup week what it is, for those of us who come over from Europe not simply for the most captivating race meeting on the planet but also for all the kaleidoscopic cultural impressions–some challenging, some enchanting–that go with it. 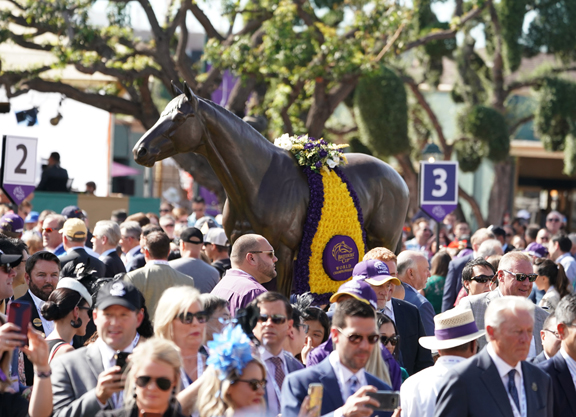 Back in Pasadena for Halloween last year, I was baffled and entertained anew by the communal delirium of a carnival that has, until a gradual commercial seepage in recent years, never had anything like the same importance on my side of the Atlantic. But the spectres, at Santa Anita, seemed all too real: we were all haunted by that harrowing sequence of breakdowns earlier in the year. In the event, a tremendous collective effort was bitterly unravelled in the final stages of the Classic itself, dashing to smithereens the champagne flutes all those diligent veterinarians and administrators must have been on the point of raising to their lips.

Let's not neglect to revive an overdue toast, then, after Santa Anita recently concluded its fall meet with zero fatalities from 1,106 starters and 51,200 training bouts. Sadly, however, the Breeders' Cup this year finds itself under a far more pervasive cloud.

For it is not just transatlantic devotees like me, grounded by the pandemic, who will feel forlornly detached this time round. Even Lexingtonians, the lucky residents of my hometown-from-home, will be painfully reminded that the whole point of the Breeders' Cup circus is how vibrantly, and how intimately, it entwines people from all walks of life; from all parts of America, and beyond.

Some bring a particular horse, and partisan hopes. Most, however, are united by impartial fervor for the Thoroughbred, and this ultimate test of its capacity for noble endeavor. And, between mornings on the track and evenings on the town, the anticipation tends to be at least as exciting as the consummation.

As it is, the horses now have a week to thaw the human coldness of this wretched year. (And, incidentally, also to reconcile any froideurs likely to be exacerbated, in the meantime, by such a contentious election.) Will they be equal to that extra burden? We can but hope.

From the European point of view, however, that hope continues to stagnate. I won't reprise, for the umpteenth time, how disastrously the raiders have mislaid the sense of adventure that yielded many of their finest moments at the Breeders' Cup. Suffice to say that not a single European entry has been made in any of the dirt races, an absolutely embarrassing state of affairs when you consider how dramatically “turf” horses (both in breeding and experience) have transformed perceptions in years past. 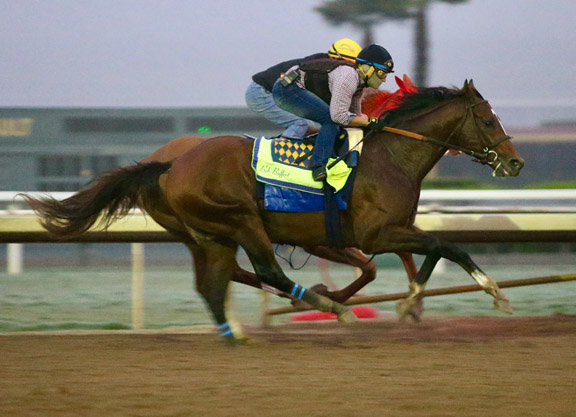 In fairness, the Coolmore partners already have a momentous stake in the Classic through Maximum Security (New Year's Day). And they remain the one European power that reliably grasps the value, to the breed, of measuring horses in a different environment and different marketplace. (The best European racehorse of recent times, in contrast, never once spent a night away from his stable in Newmarket.)

Their willingness to roll the dice has come at a mild cost, perhaps, in the way Americans perceive their principal trainer, Aidan O'Brien. But remember that Bobby Frankel, another we knew to be a genius, had to wait for his 39th starter to win a Breeders' Cup race; and John Sadler for his 43rd. And, almost invariably, horses shipping for Europe are being asked to regroup even as their reserves run low at the end of a long campaign.

O'Brien has saddled a dozen Breeders' Cup scorers, including both European winners the first time the series came to Lexington. But last year the entire, 36-strong raiding party depended for its solitary success on his son, who pulled the Filly and Mare Turf out of the fire with Iridessa (Ire) (Ruler of the World {Ire}). (O'Brien and his wife Annemarie, remember, did gain credit not only as breeders of the trainer, but also of Iridessa herself.)

O'Brien divides as many as 10 of his winners between just two races, six in the Turf and four in the Juvenile Turf. Such a perfectionist hardly needs telling that he has unfinished business in other disciplines. But while these two races may seem pretty seamless, to American eyes, they are actually divided by a spectrum that shows how O'Brien, like all great trainers, views each race in a horse's career as an organic part of a bigger, longer project.

The Turf is a destination for a horse reaching its prime, like Highland Reel (Ire) (Galileo {Ire}), Found (Ire) (Galileo {Ire}) or High Chaparral (Ire) (Sadler's Wells). For the adolescents sent over for the Juvenile Turf, however, it is as much about new experience–long travel, change of training environment, sharp tracks–as the customary stakes of prizemoney or a stud career.

Mendelssohn (Scat Daddy) nailed it both ways, in 2017, gaining the laurels on the day while also laying the ground for a switch to dirt, where he proved better yet. The next year, nobody gave a second glance at Anthony Van Dyck (Ire) (Galileo {Ire}) after he finished a rather dazed ninth. But the following June he showed the dividends, over the Epsom rollercoaster, by winning the Derby itself.

O'Brien's candidate for the race this year is the first foal of none other than Found, a War Front colt named Battleground. Albeit more by accident than design, having been held up by a cough, he will be much fresher than the typical raider having made three starts in June and July and then disappeared. He broke his maiden at Royal Ascot, no less, and then followed up at Goodwood–a useful track to educate a horse with America in mind, though he will duly want to look a bit sharper about his work this time. The form doesn't look too gripping, but he is too valuable a prospect to be sent here without due purpose.

His pedigree, in mingling the best of transatlantic influences, represents exactly what horsemen should always be looking to achieve–at the Breeders' Cup and beyond. In racing terms, there's a similar exercise underway with Qatar Racing's Kameko (Kitten's Joy), whose Classic success at Newmarket in May underlined just how culpably obtuse European breeders have been in learning the lessons offered about their sire by poor old Roaring Lion. (The one man sharp enough to buy both horses being David Redvers.)

That's another theme I have probably labored enough, by this stage. But while it may sound paradoxical, to me these are two sides of the same coin. Their turf horses, given the chance, would do far better in next weekend's dirt races than most European horsemen would nowadays seem to expect. At the same time, however, many American stallions–not just Kitten's Joy but speed-carrying dirt sires–would also give European mares a better chance of producing Classic horses on their home turf.

But you know what they say. You can lead a horse to water, and all that. And much the same is true of horsemen. After all, when even the babies drink bourbon, why would any of us try to get through such a bittersweet week on water?

This story was posted in Shared News and tagged 2020 Breeders' Cup, Battleground, Chris McGrath, pandemic, This Side Up.