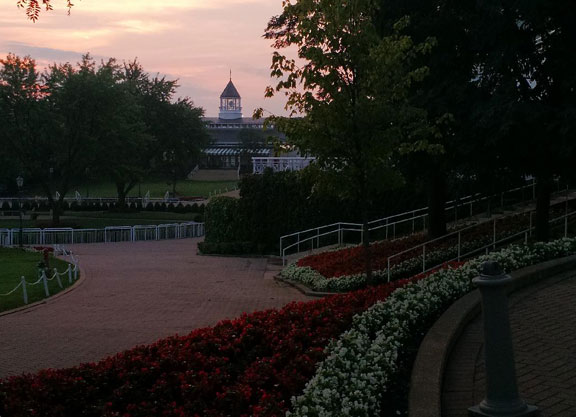 ARLINGTON HEIGHTS, Illinois – No, I didn’t click my heels three times and magically transport myself from South Jersey to Arlington Heights, but here we are. Born and raised not far from Arlington Park, it’s home and it’s great to be on hand for Arlington Million number 36 (should be 38, but race wasn’t run in 1998 and 1999).

Much as I enjoy going racing, the best memories I have from my time here was railbirding with some close friends and other acquaintances, and it was really nice to wake at the crack of dawn to make the short drive from the hotel to watch ‘trackwork’ (please forgive me).

The ‘IC’ saddletowels for Ignacio Correas were prominent all morning long and no horse made a greater impression on me than Dona Bruja (Arg) (Storm Embrujado {Arg}). Looking full of energy, the 6-year-old mare galloped very eagerly on the Polytrack, pulling up after a circuit and a half while giving her exercise rider all he could handle. The Beverly D. clearly goes through Chad Brown and on the surface, one would think Correas could have prepped in the Modesty. But maybe that he’s willing to go in here fresh is a positive and I will be very keen to see what instructions are given to leading local rider Jose Valdivia, Jr. She’s tried to make the running in her two starts this year, but the feeling here is that she’s much better when held up and allowed to finish.

I was also taken by ‘TDN Rising Star‘ Untamed Domain (Animal Kingdom), who has to improve (maybe by a lot) to win, but I’m willing to try him, especially if he floats up from his morning line (here’s hoping). He may or may not have won the Kent last time even if he hadn’t been sawed off, but he’s the kind of horse that seems to take a while to hit top gear. If he can find a spot to run, I’m banking on him finding the line hard over a trip that figures to be right up his alley.

To hear how some of the locals gush about the Chad Brown runners, it’s almost surprising any are willing to take a crack. There aren’t many Arlington-based horses in the big races, but let’s give Captivating Moon (Malibu Moon) a puncher’s chance in the Secretariat. His paper suggests he is a horse that, despite some good efforts, really hasn’t turned the corner as yet, and to that end, connections will add blinkers this time. That could be an effort to get him to lay closer or to get him to focus more on the job at hand. He got home very well, but too late, in the Mystic Lake Derby and the 10-furlong trip should also suit. Drew Nardiello, an advisor to owner Bob Lothenbach, was on hand Friday morning to observe the colt after purchasing six horses for just over $2.3 million earlier this week at Fasig-Tipton Saratoga.

There is no reason to knock any of Saturday’s favorites on looks. ‘TDN Rising Star‘ Analyze It (Point of Entry), Sistercharlie (Ire) (Myboycharlie {Ire}) and Oscar Performance (Kitten’s Joy) all look to have settled in nicely and will take some beating.

I must say that outside the runners for the three big races, there lacked some of the buzz that once was at this grand facility. Gone are the days when trainers like Bill Mott and Wayne Lukas had strings based in Chicago. Sitting here in the press box on a Friday afternoon, I remember the days when horses like Gee Can He Dance and Fritz Barthold and The Vid and any of the old class horses owned by Irish Acres would routinely appear on the twilight program. But no more.

The Beverly D. and Secretariat were once the premier races in their respective classes (not including Breeders’ Cup), but at $600,000 and $400,000, they no longer retain that status, having been supplanted by races like the GI Diana S. and the GI Belmont Derby. In this day and age, you clearly can’t rob Peter to pay Paul and I don’t know where the money would come from, but it would be nice to grow those purses.

On a personal note, it was great to reconnect with some old familiar faces this morning. And what would a trip to Arlington be without a sighting of Mr. Duchossois. In less than two months, he will be 97 years old and, I mean, the man still looks fantastic and is as vital and active as ever.

A lawn mower moves between the eighth pole and sixteenth pole. The Arlington turf course looks in great order, having been done no harm by soaking rains earlier in the week. It’s game time. Enjoy the International Festival of Racing.