Then We Take Berlin 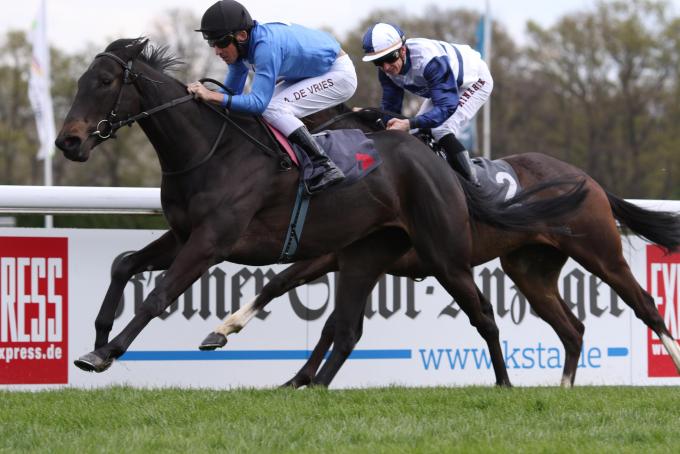 This year's renewal of Hoppegarten's G2 Diana-Trial is an open affair with a plethora of promising sorts looking to punch a ticket from Berlin to Dusseldorf for the Aug. 7 G1 Preis der Diana-German Oaks. Trainer Markus Klug holds a particularly strong hand and saddles two leading contenders in a race which resembles a cat's cradle of collateral form. Kasalla (Ger) (Soldier Hollow {GB}) arrives in the capital with a strong sophomore profile, having registered wide-margin victories at Dusseldorf Apr. 10 and at Cologne last time May 16. She ran fourth in her sole juvenile outing, finishing behind Wild Approach (Ger) (New Approach {Ire}) and Lopera (Ger) (Monsun {Ger}) at Hannover in October. Klug's other representative, and by no means the underling, is La Dynamite (Ire) (Dylan Thomas {Ire}), who entered the Diana frame with a comfortable score going 11 furlongs at Cologne Apr. 17 in her only start to date. Peter Schiergen has plundered a record five wins in this 10-panel contest and his first winner Iota (Ger) (Tiger Hill {Ire}), when the race was known as the G3 Schwarzgold-Rennen and staged at Cologne, was the last to double up in the main event in 2005. He is represented here by Lopera, who bettered an Oct. 25 debut third to Wild Approach by accounting for, amongst others, Meergorl (Ger) (Adlerflug {Ger}) over this course and distance in her only other start last time Apr. 24. Meergorl bounced back from that debut defeat to best Wild Approach, again over course and distance, May 15. Night Music (Ger) (Sea the Stars {Ire}), who is kin to 2009 G1 Preis der Diana victress Night Magic (Ger) (Sholokhov {Ire}) and 2011 Diana fifth Night of Dubai (Ire) (Lord of England {Ger}), broke through going nine furlongs here on debut Mar. 27, but had her colours lowered by G3 Preis der Winterkonigin third Pagella (Ger) (Soldier Hollow {GB}) when upped to 11 furlongs at Dusseldorf in her only other outing Apr. 30. Olala (Ger) (Tertullian) has made all four starts away from her Munich base, winning one of four starts in France, and goes postward off a one-length second to last week's G3 Prix de Royaumont victress The Juliet Rose (Fr) (Monsun {Ger}) in the May 10 Listed Prix de la Seine at Chantilly.