Home » Archive » Europe » The Weekly Wrap: For The Greater Good

The Weekly Wrap: For The Greater Good 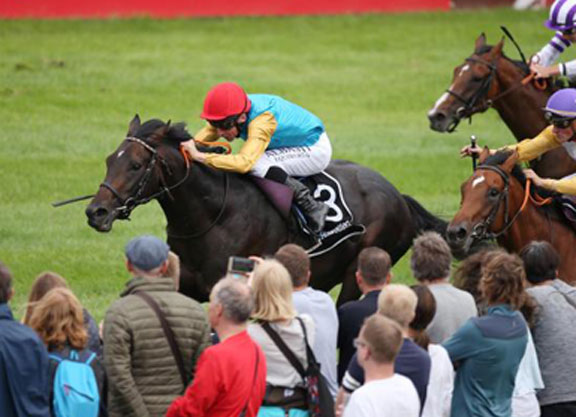 While Weltstar (Ger) on Sunday became the second winner of the G1 Deutsches Derby for his sire Soldier Hollow (GB), rather more remarkable was the fact that he was also the second winner of Germany's premier contest for his young dam Wellenspiel (Ger) (Sternkoenig {Ire}) from her first two foals.

During a tour of German studs last year it was heartening to find that the majority of breeders in the country still have one aim uppermost in their minds: to produce a Derby winner. Gestut Rottgen, owner-breeder of Weltstar and his year-older half-brother Windstoss (Ger), is upholding this principle in fine style but the operation went a long time between drinks, having won its first German Derby in 1932, eight years after the Cologne-based farm was founded by Peter Paul Muhlens. Until last year, Rottgen's most recent Derby victory had come in 1959.

The farm's bloodlines have hardly been idle in between, however, and internationally campaigned runners to trace back to Rottgen include Team Valor's Kentucky Derby winner Animal Kingdom (Leroidesanimaux {Brz}), whose grandam Dynamis (Ire) (Dancing Brave) was a bred at the farm, and G2 Park Hill S. Wild Coco (Ger) (Shirocco {Ger}), a rare runner in the stud's colours outside Germany when trained by Sir Henry Cecil.

Gestut Rottgen is these days run by a trust which was established by the founder's daughter Maria Mehl-Mulhens prior to her death in 1985. It was her express wish that the breeding operation should continue and that the trust—which included funding for the family name to be carried by the German 2000 Guineas, the Mehl-Mulhens-Rennen—maintain the ethos to improve the standard of racing and breeding in Germany.

In many ways, the German breeding industry has fallen victim to the success internationally of its own bloodlines, with many breeders unable to turn down lucrative offers for some of the country's better mares to be exported. A downturn in the domestic racing programme has also led to a dwindling in numbers of the German broodmare band but there remains a core of farms committed to the pursuit of breeding top-class middle-distance performers.

Maria Mehl-Mulhens's posthumous influence is felt still, with 10-year-old Wellenspiel, a half-sister to the G1 Preis von Europa winner Well Made (Ger) (Mondrian {Ger}), now a jewel among Rottgen's 30-strong broodmare band. Her first mating with the Deutsches Derby winner Shirocco produced Windstoss and after visiting Germany's most sought-after sire Soldier Hollow, she was then mated exclusively with residents of the Rottgen stallion wing in Reliable Man (GB) (subsequently relocated to Haras du Thenney), another Deutsches Derby winner Kamsin (Ger), and G1 Melbourne Cup winner Protectionist (Ger) in his first season at stud. Earlier this year she left Germany to be covered by Dubawi (Ire).

To embellish further the tale of homegrown success, Rottgen's homebreds are trained by Markus Klug in tranquil seclusion within the walled splendour of the 820-acre estate. On a memorable Sunday for the team, Klug not only saddled the first two home in the Derby but also won the Listed Hamburger Stuten Cup with Rottgen's Alicante (Ger) (Lando {Ger}).

Gestut Rottgen can rightly lay vicarious claim to at least two other group winners within the last week.

Back in 1982, the private purchase by Sheikh Mohammed of German Group 2 winner Anna Paola (Ger) (Prince Ippi {Ger}) saw her transferred from Rottgen to the Darley broodmare band. Her female-line descendants have brought widespread success, not just for the sheikh but for a number of other breeders.

Within the last seven days the family has been to the fore once more with Indian Blessing (GB) continuing a good season for her trainer Ed Walker and returning, in effect, to her roots to win the G3 Sparkasse Holstein Cup in Hamburg on Wednesday. The daughter of Sepoy (Aus) was bred by Jocelyn Targett from the Halling mare Alpen Glen (GB), a great granddaughter of Anna Paola picked up from the Darley draft at Doncaster in 2010 for just £12,000. Alpen Glen's first three foals have all earned black-type.

Power To The Jumpers…

The fearless former jump jockey Ian Watkinson, sometime rider of the great Tingle Creek, wandered into our yard on Monday morning and for no apparent reason decided to recount the tale of when he was accosted by Jean Hislop in the car park at Newbury. Hislop expressed in no uncertain terms her dismay that Watkinson had dared to ride a son of the great Brigadier Gerard, whom Hislop owned and bred with her husband John, in a hurdles race.

It is hoped that the many distinguished Flat breeders who have followed or been involved in the exploits of the Anna Paola family over the years were not too dismayed when her granddaughter Annie Power (Ire) (Shirocco {Ger}) became one of the most beloved stars of the jumps brigade in recent years. The statuesque mare, out of Anno Luce (GB) (Old Vic {GB}), did indeed start her career in a Flat yard and made two winning appearances in bumpers for Jim Bolger before being transferred to the care of Willie Mullins.

The Champion Hurdler of 2016 has been purchased by Coolmore and is now in foal to Galileo (Ire), with her former racing owner Rich Ricci, a devoted jumps fan with the odd Flat interest, retaining a share in her first foal.

Whichever way her connections decide to point Annie Power's future offspring, they are unlikely to be put off by the current strength of the National Hunt market in Britain, Ireland and France, where there have been record-breaking returns for store horses at the Goffs Land Rover Sale, Tattersalls Ireland Derby Sale and last week's Arqana Summer Sale. Following top lots of €325,000 and €365,000 at Goffs and Tattersalls Ireland, a Poliglote (GB) half-brother to the classy AQPS steeplechaser Silviniaco Conti (Fr) led the way among the French stores when selling to leading trainer Guillaume Macaire for €180,000 last Tuesday.

While Arqana's mixed summer sale is more usually dominated by jumping stock, this year's edition saw a pair of Flat horses, Esteve (Ire) and Masterpiece (Ire), both by Mastercraftsman (Ire), break new ground when selling for €445,000 and €345,000, respectively. The 3-year-olds were both bought by Gerard Larrieu to continue their racing careers in Qatar.

Arqana's record-breaking Summer Sale will have put a smile on the faces of Eric Hoyeau's team, who will be in Newmarket this week to launch the company's flagship August Yearling Sale with its sponsorship of the G2 Arqana July S. on Thursday. The catalogue of 345 lots contains the first two yearlings by Triple Crown winner American Pharoah to be offered for sale in Europe.

Arqana will also have been boosted by a breakthrough first Group 1 winner for Intello (Ger), who has split his time between Cheveley Park Stud and Haras du Quesnay.

Intellogent (Ire), bred by the August Sale's perennial leading vendor Ecurie des Monceaux, was a €320,000 yearling bought by Amanda Skiffington for Fiona Carmichael. With victory in the G1 Prix Jean Prat on his CV, it's fair to assume that the Fabrice Chappet-trained colt is now very much on the radar of stud masters, extending Carmichael's extraordinary involvement with future stallion prospects as an owner to four, after Havana Gold (Ire), Toronado (Ire) and Ivawood (Ire).

Among the 35-strong draft from Monceaux this August is Intellogent's half-sister by Gleneagles (Ire), another first-crop sire and son of Galileo (Ire). The filly will sell early on the Saturday evening of the sale as lot 8.

Intellogent's success on Sunday means that Intello is now in second position on the second-crop sires' list in Europe, but the runaway leader remains Camelot (GB), whose dominance was increased further by the GI Belmont Oaks victrix Athena (Ire).

We hear plenty about Urban Sea's sons Galileo and Sea The Stars (Ire), but her four daughters Melikah (Ire), All Too Beautiful (Ire), My Typhoon (Ire) and Cherry Hinton (GB) are accomplished in their own right. It is Urban Sea's youngest daughter Cherry Hinton, by Green Desert, who produced Athena, in addition to her G1 Irish Oaks heroine Bracelet (Ire) and G2 Rockfel S. winner Wading (Ire), both daughters of Camelot's sire Montjeu (Ire).

Following a Royal Ascot victory for Hunting Horn (Ire), who went on to be third in the G1 Belmont Derby, Athena's win also reiterates a pleasing theme of Camelot's name being blended with families of other notable Coolmore stallions. While Athena's dam is a half-sister to Galileo, Hunting Horn's dam Mora Bai (Ire) is an Indian Ridge (GB) half-sister to High Chaparral (Ire). Sadler's Wells and the Derby link all three.