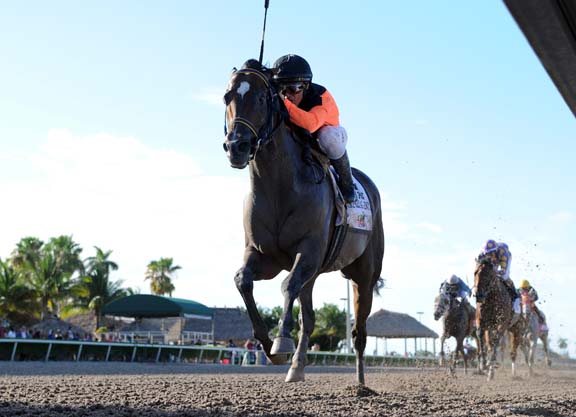 With 14 races on the card, including seven stakes, three of them graded, Gulfstream Park figured to steal the spotlight this past weekend from other tracks when it came to the quality of its racing. It did. The races were competitive and exciting and produced a rising star in the male sprint ranks in GIII Smile Sprint S. winner Imperial Hint (Imperialism). But it was not the racing, but the betting that made this card so remarkable.

Granted, Gulfstream ran 14 races to 10 each at Santa Anita and Belmont, but this is not supposed to be happening. It's summer, a time of year when South Florida racing used to move to Calder and would fall off a cliff. With total handle around the country stagnant or declining slightly year after year, what Gulfstream management has managed to do with the “non-championship meet” portion of its season is nothing short of a miracle, and it has not gotten the attention it deserves.

A better comparison than how Gulfstream's handle compared to Belmont and Santa Anita's is what it looks like in contrast to when the Summit of Speed card was held at Calder. The last time these races were held at Calder was in 2013 and they handled $4,019,105 on that day, which included 11 races. Four years later, Gulfstream achieved a 315% increase in handle over what they bet on Calder's last Summit of Speed Day.

It is true that much of the Gulfstream handle is coming through the handful of heavy-hitting computer bettors who have inked sweetheart deals with the Stronach team and are getting huge rebates. But that deflects from the real story, that Gulfstream management has proven that when you care, try hard, market, write a condition book that works for your local horse population and use the grass course as much as possible, summer racing in South Florida not only can work, but can thrive.

The trio of graded stakes began with the GIII Carry Back, won by Three Rules (Gone Astray). After winning his first five starts, the Florida-bred's career headed in the other direction as he lost five straight. But trainer Jose Pinchin has him back where he belongs, in sprints, after testing the Derby trail. A race like the GI King's Bishop could be in his future.

Trainer Martin Wolfson won the GII Princess Rooney S. for the sixth time as Curlin's Approval (Curlin) won the race for the second straight year. Wolfson has had a quiet year, but few are better with sprinting fillies and he had the 4-year-old ready to go after a disappointing seventh-place finish in the GIII Matron at Churchill Downs. Luis Saez was aboard for his third straight win in this race.

Trainer Luis Carvajal, Jr. is far from a household name within the sport, but he has done a stellar job with his 4-year-old sprinter Imperial Hint. The last anyone had heard of the colt he was being pulled out of the G1 Dubai Golden Shaheen after developing a fever. Carvajal regrouped and had his stable's lone star ready for a top effort. Making his first start since the Feb. 18 GIII General George S. at Laurel, he won by 4 3/4 lengths and is making noise that he may be as good as any sprinter in the country.

Baffert and His 4-Year-Olds

It's been a strange year for Bob Baffert. Known for his expertise with 3-year-old males and his outstanding record in the Triple Crown races, Baffert was all but invisible this year on the trail to the Derby and through the Triple Crown races themselves. He won exactly one Derby prep, the GII San Felipe with Mastery (Candy Ride {Arg}) and had nothing notable on his bench once that potential superstar went down with an injury. With the GI Haskell, the GI Travers and the GI Pennsylvania Derby yet to have been run, it's not too late for Baffert to develop a 3-year-old, but it's likely he's not the least bit worried about it. He's so loaded with good older horses, in particular 4-year-old males, that he doesn't have to worry about it.

When Baffert won Saturday's GII San Carlos at Santa Anita with Danzing Candy (Twirling Candy) it marked his 12th stakes win this year with a 4-year-old male and 10 of the wins have come in graded company. He also won the GII San Antonio with the 5-year-old Hoppertunity (Any Given Saturday).

King Leatherbury, the owner, trainer and breeder of Ben's Cat (Parker's Storm Cat) finally made the announcement he had probably hoped to never make, that Ben's Cat was being retired. The horse had turned 11 and was off the board in all three starts this year. Leatherbury could have pushed him a little further to try to squeeze out a few more dollars from him, but he did the right thing. It was time for him to go off and enjoy a well-deserved retirement.

Ben's Cat's final career stats have been printed numerous times in this publication and elsewhere, but they're worthy of at least one more mention: 63 starts, 32 wins, 26 stakes wins, $2,643,782.

Ben's Cat has never been Eclipse Award material and he's a longshot to make the Hall of Fame, but he was remarkable in his own way. A throwback, for his versatility, his longevity and his like ability, he was one of the more special horses of his era.

Ten Across on the Four and the Giants Plus 3

There's no guarantee that the Supreme Court will rule in favor of the State of New Jersey and allow sports betting within the state, but many believe the justices will in fact give the green light and patrons at Monmouth Park will soon be allowed to wager on a lot more than the ponies. If so, that would be very good news for the struggling Thoroughbred and harness racing industries in the state. Jersey is the only racing state up and down the eastern seaboard that does not benefit from a cut of slots and/or casino gaming and the results have been devastating. With its meet now down to just 50 days, Monmouth is a shell of its former self and the revenue from sports bets would breathe new life into one of the sport's great racetracks.

Yet, a Supreme Court decision that approves sports betting may raise as many questions as it answers. In the short-term, it would mean that Jersey's racetracks and casinos can have sports betting. Dennis Drazin, who heads the management team that runs Monmouth, estimates that $10 billion will be bet annually on sports in the Garden State. But what would that decision mean for other states and racetrack in other states? Outside the Bible Belt, everyone is going to want sports betting, but what will the rules be, how do they go about getting it and, most importantly for racing, where will the betting be allowed?

If, say, California gets sports betting and it is only available at the state's tracks and casinos that would be a terrific thing for California racing. But what if it is allowed on the Internet? What if it is allowed virtually everywhere with little or no restrictions? Might betting shops like the ones they have in the U.K. pop up on ever corner in every town in America?

John Campbell Goes Out a Winner

While John Campbell had absolutely nothing to do with Thoroughbred racing, his retirement deserves mention in this publication. During a career that began way back in 1972, Campbell wrote the blueprint for how someone in any racing industry should conduct themselves. It's more than he was just the best harness driver who ever lived. He was a gentleman, a great ambassador for the sport, was never once anywhere close to being involved in a scandal, and was regarded as the ultimate class act. He cared deeply about the sport and worried about its well-being, which is why he would do anything asked of him. He always put the sport above himself.

Campbell's last drives in a pari-mutuel race came Friday night at the Meadowlands and, of course, it was a storybook ending as he won with his last two drives. He will drive in a handful of exhibition races in the weeks ahead, but his future is as an executive. He has been named the CEO and President of the Hambletonian Society, which is among the more important front office positions in the sport.

It's too bad he didn't become a jockey. Thoroughbred racing could have used him.