The Stage is Set for Phyllis Wyeth's Dancing Rags 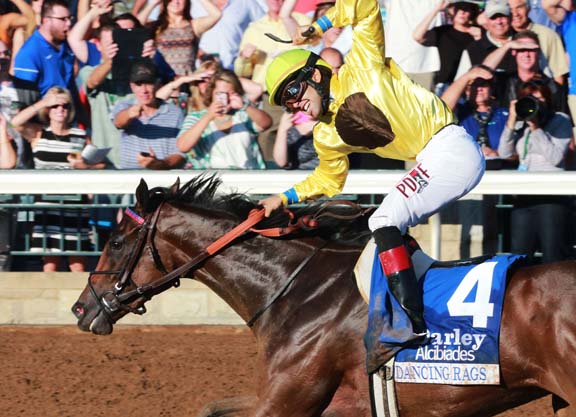 Dancing Rags, the 2016 GI Alcibiades S. heroine, will be offered at this year's Fasig-Tipton November Sale on Nov. 8. and will represent the end of the line of an esteemed story in Thoroughbred racing and breeding as one of the last broodmares owned by the late Phyllis Wyeth. The daughter of Union Rags is in foal to top sire Curlin, and already has an Into Mischief yearling filly and a War Front weanling filly on the ground.

“I think Dancing Rags should appeal to a lot of people,” said consignor Braxton Lynch of Royal Oak Farm. “She is beautifully balanced. She has a lovely head and eye, and has plenty of power, length and athleticism. Both her yearling and weanling look very much like her.”

Raced by philanthropist and Thoroughbred breeder Phyllis Wyeth, who passed away in January of last year, Dancing Rags's greatest appeal comes in the legacy she will carry on as a producer.

“She was an amazing person,” longtime associate Bill Farish said of Wyeth. “She was paralyzed in a car accident when she was in college, but never let that slow her down in life. She was a very big advocate for disabled Americans. I've been told that all the ramps on the sidewalks in New York City and other cities are really because of her and her efforts.”

“What a privilege it was to get to know Mrs. Wyeth,” said Fasig-Tipton's Boyd Browning. “Many people that faced a disability and the challenges that she faced from a physical perspective would have felt sorry for themselves. But Mrs. Wyeth was a character. She brightened the sales grounds. I loved visiting with her and hearing her stories. She had a great wit about her and a great spirit of life.”

Wyeth grew up near her family's farm in Virginia, where their racing and breeding operation was most noted for Devil's Bag and Gone West. After marrying the acclaimed painter Jamie Wyeth in 1968, she and her husband resided at her family's Point Lookout Farm on the Pennsylvania-Delaware border. Despite her physical disability, Wyeth's love for horses never faltered and she was a carriage driver and active Thoroughbred breeder throughout her life.

Her biggest success in racing came when a homebred colt by Dixie Union went on to become 2012 Belmont S. winner Union Rags.

A fourth-generation homebred, Union Rags was initially sold as a yearling at the Fasig-Tipton Saratoga Yearling Sale, but Wyeth bought the colt back one year later for $390,000.

“He sold for just above the reserve she had set, but she still wasn't very happy with the sale,” Farish recalled. “She got reports that he was training really well as a 2-year-old. She had really high hopes for him, and he ended up living up to it.”

Wyeth's instincts proved to be correct when Union Rags went undefeated in his first three starts as a juvenile, and later retired to Lane's End Farm as a four-time MGSW with Grade I victories in the Champagne S. and Belmont S.

“She was very attached to her horses, and Union Rags was a great example of that,” Farish said. “She came and visited Union Rags as often as she could and really loved seeing him.”

A few years after Union Rags's Belmont S. victory, Wyeth found a filly at the 2016 OBS March Sale from the first crop of Union Rags that she couldn't leave without. She purchased Dancing Rags, who had worked a speedy :10 breeze, for $210,000.

Again, Wyeth's horse sense turned out to be accurate when Dancing Rags broke her maiden at second asking and then sailed to Grade I stardom in the Alcibiades S. at Keeneland for Graham Motion.

“When Dancing Rags won the Alcibiades, it was an incredible day,” said Farish. “To see Phyllis not only race Union Rags, but then race a Grade I winner by him was a real thrill for her and a thrill for anyone that knew her.”

The now six-year-old mare is out of Grade III-placed Home Court (Storm Cat), a daughter of Eclipse Award-winning older mare and Breeders' Cup champion Jewel Princess (Key to the Mint). Following her racing campaign, Home Court was purchased for $1.4 million in foal to Gone West at the 2005 Keeneland November Sale.

As Browning reflects on the purchase, he said the buyer of the mare makes Dancing Rags's story even more special to him.

“Our long-time friend and associate Bill Graves bought Home Court for Gordon Stollery's ASG Thoroughbreds,” he said. “So it's got the personal connection for us, with both Mrs. Wyeth and Bill Graves, in terms of the pedigree influences.”

Home Court was sold again at the Keeneland November Sale in 2012. Soon after, she produced her first blacktype winner in dual MGSW and sire Coup de Grace (Tapit), followed by Dancing Rags herself.

Lynch says that Wyeth's family plans to gradually trim down the horsewoman's broodmare band, and that they found this year's 'Night of Stars' sale to be a perfect fit for the unique offering.

Dancing Rags will be sold as Hip 261 with Lynch's Royal Oak Farm consignment.

“She's almost like the complete package for a breeder that's looking for either success as a commercial operation or a racing operation,” Browning said. “Not only was she the product of many years of really astute horsemen and women's matings, she demonstrated her quality on the racetrack. Now the family has set the stage by breeding her to two of the most preeminent stallions that have offspring, and she's in foal to Curlin-arguably one of the world's greatest stallions.”

“Dancing Rags represents one of the last opportunities to buy anything from [Wyeth's] program,” Farish said. “She has Phyllis written all over her. She's got a great pedigree, and I think she's going to be a great broodmare.”