The Shuka Sho Goes On 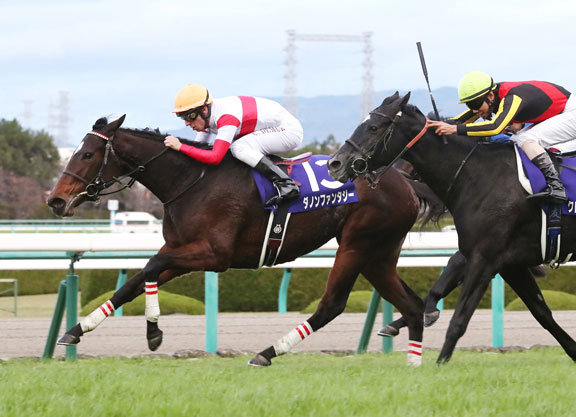 Tokyo Racecourse may have cancelled its weekend cards in anticipation of Typhoon Hagibis, but the show goes on at Kyoto Racecourse some 450km to the west, where the G1 Shuko Sho, the final jewel of the Japanese Fillies’ Triple Crown, features. Last year’s 2-year-old filly champion Danon Fantasy (Jpn) (Deep Impact {Jpn}) got back on track with a win over Beach Samba (Jpn) (Kurofune) in the G2 Sho Rose S. over 1800 metres on Sept. 15, having suffered defeat in the G1 Oka Sho (Japanese 1000 Guineas) and G1 Yushun Himba (Japanese Oaks) when fourth and fifth, respectively.

Curren Bouquetd’or (Jpn) (Deep Impact {Jpn}) has just two wins to her credit, but the daughter of the Scat Daddy mare Solaria has never been out of the money in seven starts. Picking up a black-type win in the Listed Sweetpea S. in Tokyo on Apr. 28, she outran huge odds three weeks later when a neck second in the Yushun Himba. Given a summer break thereafter, she was third on return in the G3 Shion S. over this trip behind Passing Through (Jpn) (Rulership {Jpn}).

A pair of progressive fillies to keep an eye on are Espoir (Jpn) (Orfevre {Jpn}) and Satono Damsel (Jpn) (Deep Impact {Jpn}). Espoir has won three of five starts, including her most recent two in allowance company and she takes a big class jump. Satono Damsel, a half-sister to GI Kentucky Derby and G1 Dubai World Cup winner Animal Kingdom, is three-for-three and also tries stakes class for the first time.