The Show Continues in Preakness 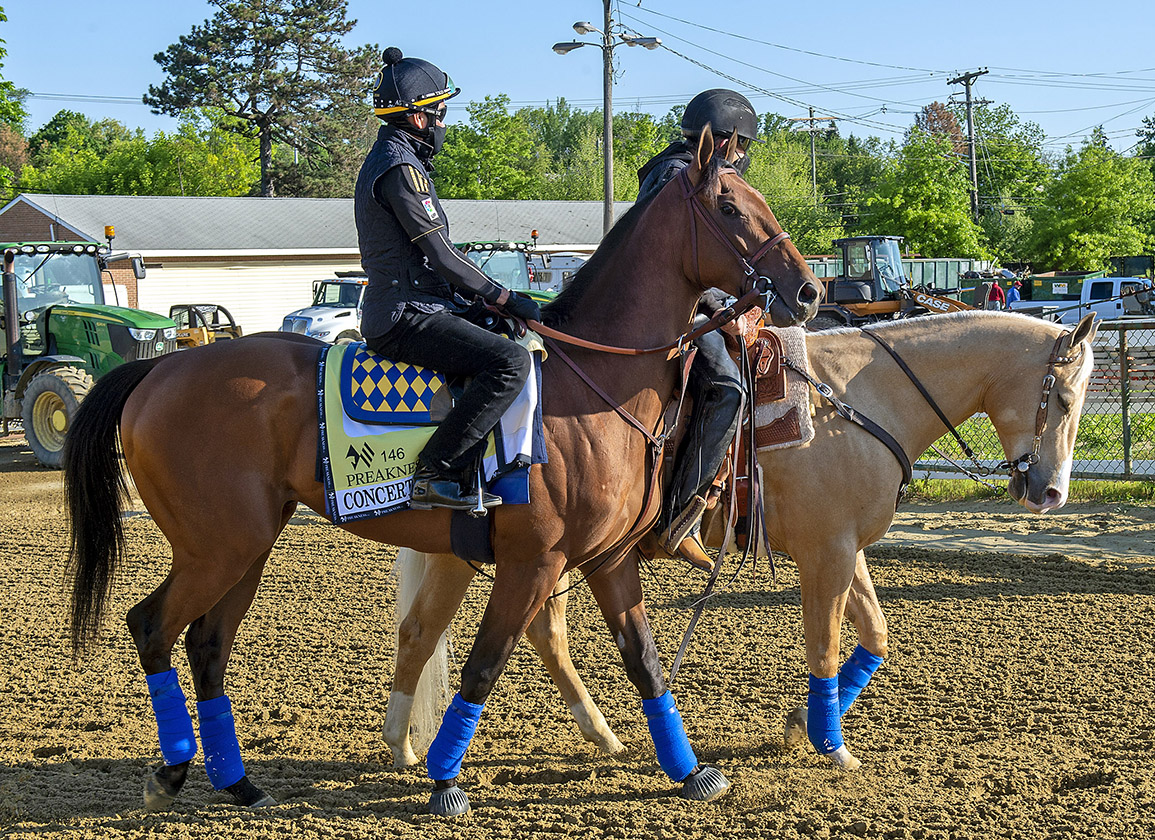 BALTIMORE, MD–Immediately after the May 1 GI Kentucky Derby, it appeared that the GI Preakness S. two weeks hence would be a routine affair. Trainer Bob Baffert would be heading to Pimlico with a record seventh Derby victory under his belt and he would be in the enviable position of trying to collect his eighth win in the second jewel of the Triple Crown. And then the unthinkable happened. The Derby winner, Medina Spirit (Protonico), tested positive for Betamethasone, a substance banned on race day. That single event sparked a week of drama, statements, interviews and a ton of speculation. Initially, the public was told the horse did not receive the drug. Then, it was discovered the colt, who had been wrestling with a skin condition, required an anti-fungal. Enter Otomax, said anti-fungal which contains, you guessed it, Betamethasone. As the week progressed, the speculation continued, lawyers racked up billable hours and later in the week, the local officials gave the green light for the Baffert horses to race after early testing came back negative for any prohibited substances. While many must have given a sigh of relief, the next hurdle remains, can Medina Spirit follow up with a win Saturday? Will a victory silence his detractors or will it simply give the media more fodder for the ensuing three weeks to the June 5 GI Belmont S.? And while the morning line favorite appears to be, at least on paper, the one to beat, nine rivals will try to stand in his way.

Team Spirit
Which ever way you cut the cake, Zedan Racing's Medina Spirit and stablemate TDN Rising Star Concert Tour (Street Sense) enter Saturday's Classic with the deepest credentials. Medina Spirit took his debut at Los Alamitos last December before finishing second in the Jan. 2 GIII Sham S. to another Baffert monster, TDN Rising Star Life Is Good (Into Mischief). That duo met again in the Mar. 6 GII San Felipe S. and once again, Medina Spirit had to settle for second–beaten eight lengths–while the early Derby favorite was forced to the sidelines after suffering a leg injury in training later in the month. Medina Spirit forged on the Apr. 3 GI Santa Anita Derby, and finished runner-up behind Rock Your World (Candy Ride {Arg}). Sent off no better than 12-1 for the Derby, Medina Spirit went to the front and never looked back en route to a half-length victory over 26-1 chance Mandaloun (Into Mischief).

Taking a difference approach early in his 3-year-old season, Gary and Mary West's Concert Tour earned his Rising Star status with an emphatic score going six panels at Santa Anita before making it two straight with a victory in the seven-furlong GII San Vincente S. Feb. 6. Back on top in the Mar. 13 GII Rebel S. over 8 1/2 furlongs, he finished third in the Apr. 10 GI Arkansas Derby.

Medina Spirit, accompanied by a returning John Velazquez, exits the three hole, while Concert Tour breaks from the 10. Mike Smith gets the call.

“[Concert Tour] is a speed horse, so he will get out of there and get a position and be on the outside somewhere,” said Baffert assistant Jimmy Barnes. “I think we're fine with both our positions. They are both front-running horses, so they will probably will be up there in the clear, hopefully. He's one that is placed forwardly in the racing. Being on the outside should be fine.”

Chad Brown offers up two in this year's Preakness renewal, Crowded Trade and Risk Taking (Medaglia d'Oro). The former won at first asking at the Big A before coming up a nose short in the Mar. 6 GIII Gotham S. Mostly recently, the chestnut came from off the pace to finish third behind a pair of longshots in the Apr. 3 Wood Memorial S. Risk Taking came home a winner in two consecutive starts, including the Feb. 6 GIII Withers S. before offering little when seventh as the 2-1 choice on the Wood. Javier Castellano climbs aboard Crowded Trade for the first time, while Jose Ortiz joins Risk Taking.

“Crowded Trade ran a really good race in only his third start,” Brown said. “He did hang a little bit in the lane, but he made up a lot of ground after breaking bad. Risk Taking was quite a disappointment that day. He was coming into the race in excellent form and his numbers were heading the right way. He just didn't fire.”

According to Brown, Risk Taking took a lot of kickback in the Wood, causing the colt to have one eye closed the following day.

“Clearly, the kickback impacted him to some degree,” Brown said. “Whether that fully explains why he just quit in that race, I will never be certain of it. I am just going to draw a line through that race. I just hope he can get back to his race in the Withers, which would put him in contention here.”

Midnight Bourbon (Tiznow), winner of the Jan. 16 GIII Lecomte S., followed up with a third behind Mandaloun in the GII Risen S. before finishing second in the GII Louisiana Derby Mar. 20. Typically on or near the engine in his races, the imposing bay broke slowly after the ground gave away under him at the start of the Kentucky Derby, leaving him uncharacteristically far back in the early going. He rallied to finish a respectable sixth.

“We're expecting a very good run from him,” said trainer Steve Asmussen, who previously won the Preakness with Curlin in 2007 and Rachel Alexandra in 2009. “I thought he was in great physical shape going into the Derby..everything was going extremely well. Missing the break did not put him in the position necessary for him to have success. From where he was, he ran reasonably well but not good enough. Here we are with a lot of horse going into the Preakness and expecting a better outcome.”

Midnight Bourbon exits Post 5 with Irad Ortiz Jr. in the irons for the first time.

GII Kentucky Jockey Club winner Keepmeinmind (Laoban) has failed to hit the board in a trio of starts this term, including a seventh in the Kentucky Derby, but his trainer Robertino Diodoro thinks the late-closing colt can turn things around Saturday.

“The only thing is, the race is run on dirt and not paper,” he said. “You know how that goes sometimes. But on paper, I think there's definitely enough pace and the smaller field helps. I think we drew well [Post 2], and will stay on the rail as long as we can..You got to worry about your own horse, and we're not going to change our running style. We tried that once a couple of starts ago, because of the lack of speed and it didn't turn out [fifth in the GII Blue Grass S. Apr. 3]. We're going to go back to our normal way of just worrying about our horse and hoping he's doing well–and definitely don't take him out of his element.”