Home » Archive » Shared News » The Rematch We All Want: Let's Make It Happen

The Rematch We All Want: Let's Make It Happen 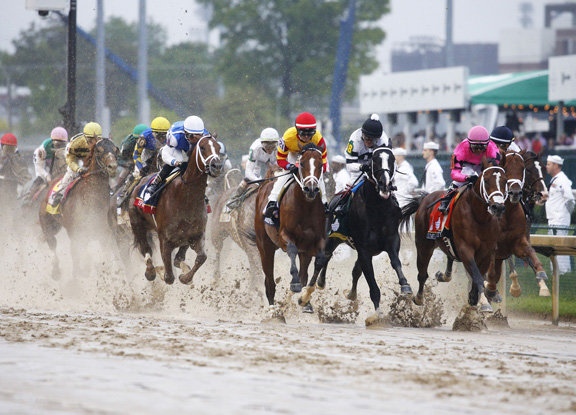 Maximum Security leading the field in the 2019 Kentucky Derby | Coady

The Week in Review, By Bill Finley

We won't see War of Will (War Front) versus Maximum Security (New Year's Day) in the GI Belmont S. Via email, Gary West, the co-owner of Maximum Security, confirmed that his horse will not race in the final leg of the Triple Crown.

“We are not looking at the Belmont because the trainer (Jason Servis) thinks he needs more time to recover from the Derby and, with us, the horse comes first,” West wrote. “Maximum Security will tell us when he is ready to run.”

War of Will is being pointed toward the Belmont, trainer Mark Casse confirmed after his colt's win in the GI Preakness S.

Holding Maximum Security out of the Belmont is perfectly reasonable. There is no Triple Crown on the line and he had to run hard every step of the way in a Derby in which he crossed the wire first only to be disqualified. The game of bumper cars that ensued in the Derby stretch run could also have left him banged up.

But with all that has ensued in the first two legs of the Triple Crown, Round 2 of War of Will vs. Maximum Security would be the most anticipated race in years. It's an odd situation since Maximum Security did not officially win the Derby, but most everyone believes he was the best horse that day. But there is a grey area since War of Will was bothered so badly he wasn't fully able to show what he could do Derby Day. And when he got a trouble-free trip he came back to win the Preakness. You also have a bit of a dustup between the owners. In between races, West went on TV and claimed that War of Will, and not Maximum Security, actually caused all the trouble in the Derby. Barber answered back with a press release where he “categorically denied” what he said was a “false accusation.”

So what we have here is the chance for a good old-fashioned grudge match.

Barber, who watched the Preakness from France, has been unavailable to the media since the race, so no one is quite sure what is going through his mind right now. He might like to know that West said he was happy to see War of Will win.

“(War of Will) was the best horse in the Preakness and I congratulate everyone connected with the horse,” he said.

“Our goal now is to win the 3 year-old Eclipse and everything we do will be to that end,” West said.

The most obvious place for the two horses to meet is the Haskell. The GI Travers, the GI Pennsylvania Derby and the GI Breeders' Cup Classic are also possibilities. But everyone should be rooting for Barber and Casse to point War of Will to the Haskell rather than waiting for another spot to take on Maximum Security. With horses being as fragile as they are, the longer they put off the rematch the less of a chance there is that it will actually happen. Gary Barber has to worry about what's best for his own horse, but we can all hope he would also factor into the equation what's good for the sport, and that's a Haskell appearance by War of Will.

There's also the matter of West's challenge that he issued to the owners of the others horses involved in the Derby incident. He essentially offered to bet any of the other owners $5 million that their horse would not finish ahead of Maximum Security in any race where any among that group of 3 year-olds showed up to take on his horse.

Prior to the Preakness, the challenge looked silly. Maximum Security was the best horse in Derby and any of the owners of horses who finished behind him would be foolish to wager $5 million at even-money odds that they could beat him. After the Preakness, that may no longer be the case. West and Barber are both very rich men and Barber very well could be so emboldened by the Preakness win that he's ready to accept West's challenge.

“Mr. Barber is a good man, but I can't speak for him,” West said. “But I would personally take me up on my offer in a heartbeat. War of Will and Maximum Security would generate a lot of interest in racing and a 'match race within a race' with those two horses would be very good for the sport.”

He's 100% right. Let's hope Barber agrees and has already circled the Haskell on his calendar.

It's no secret that there is too much racing in the Mid-Atlantic and not enough horses to go around to adequately fill cards at all the tracks running this time of year in the region. To have racing going on concurrently at Laurel/Pimlico, Delaware Park, Monmouth and Parx is not sustainable. To make things even more difficult on the racing offices, Colonial Downs will rejoin the group later this year after being closed since 2013. And, in the past, when they raced, the Maryland tracks would shut down. This year that's not going to happen.

One of these tracks had to be the odd track out and it's clear that it's Delaware Park. Even with slot-infused purses they simply don't have enough horses to conduct a viable meet. On Saturday, Delaware had three races with just four starters and another with five. They are averaging 6.08 starters per race for the meet.

That figure would be even lower if not for Delaware twice canceling cards due to insufficient entries. That's two cancellations from the first nine scheduled cards.

The TDN received no response when sending an email request to interview Delaware Park President Bill Fasy. What I would have liked to know is what the track plans to do about the situation. It might be a hard pill to swallow, but the most obvious solution would be, in the future, to run a five or six-day meet centered around the GII Delaware H. It would be terrific if some, if not all, of the tracks that compete with Delaware would all shut down on Del Cap Day if Delaware agreed to forego a full meet. That, however, as we all know, will never happen.

Usually superlatives and accolades are reserved for races run at the highest level, but Friday's GIII Miss Preakness produced what was undoubtedly the best performance of the year by any horse. Covfefe (Into Mischief) completed the six-furlong race in 1:07.70 for trainer Brad Cox. She shattered the Pimlico track record for the distance, which was 1:09, and set by Northern Wolf in 1990.

What makes the feat all the more impressive is that there is basically no “run up” when it comes to six-furlong races at Pimlico. The horses trip the teletimer within a stride or two of leaving the gate, essentially meaning that the races are timed from a standing start. The 1:07.7 at Pimlico might have been 1:06 and change at any other track.