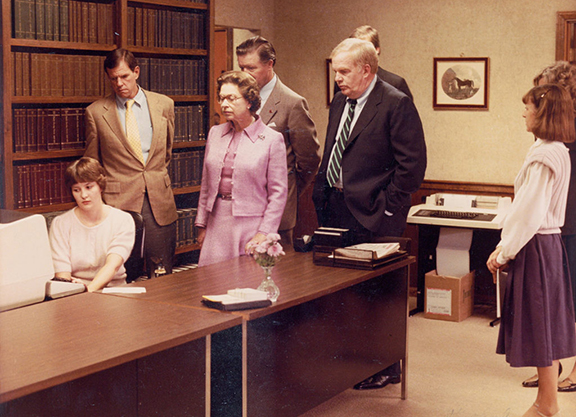 Editor's note: This year marks 50 years since the founding of Bloodstock Research Information Systems, a company that revolutionized data in horse racing and breeding and which was instrumental in the founding of the Thoroughbred Daily News. This article by Brisnet's Vance Hanson and the photos included have been republished with their permission.

Harry Herbert arrived to work at Bloodstock Research Information Services one day in early 1984 with something surprising to tell company founder and president Richard “Dick” Broadbent III, and asked the secretary if he could see Broadbent. The secretary got back to Herbert and said Broadbent would let him know.

“I said, 'It's quite important,' and she said, 'I don't think I'll be quite brave enough to tell him that,'” Herbert said.

A larger-than-life character with the reputation for a mercurial temperament, Broadbent was soon on the office intercom and, in mildly colorful language, demanded Herbert come see him. The greeting when Herbert arrived in Broadbent's office was similar in tone.

“'You really don't know much about me,'” Herbert recalled telling Broadbent. “'My dad is quite a well-known person in racing in the U.K., and he also manages the Queen's horses and is her closest friend.' (Broadbent) went ballistic. He thought I was literally taking the piss out of him.

“I said, 'No, Mr. Broadbent, it's true. (The Queen) wants to come to Kentucky and see where I work–to see what you've done here, and what you've achieved.'

“Bit by bit, this terrifying, huge man disintegrated. He sort of shrank in front of my eyes. He literally became a different person. It was quite extraordinary.”

Among the undisputed highlights of Brisnet's 50-year history was the visit from Queen Elizabeth II to its Lexington, Kentucky, offices on Oct. 10, 1984, an event that likely wouldn't have happened at any other time if not for the mutual connection of Harry Herbert.

Herbert, 62, has worn and continues to wear many hats in the racing and breeding industry, most notably as chairman and managing director of Highclere Thoroughbreds. Herbert is the second son of the late Seventh Earl of Carnarvon, who viewers of the Netflix miniseries “The Crown” would recognize as the Queen's life-long friend and racing manager Lord Porchester (“Porchy”).

“I started following my dad's horses in my very early 20s, and he saw I was getting interested (in racing),” Herbert said. “It was a dormant gene, where you suddenly wanted to learn more. You want to see the horses train in the morning. I used to go with him to Major Dick Hern's yard. I suppose that's what really got me going.

“I was working in the City (London's financial district) for a stockbroking company. It wasn't doing it for me, and ideally I wanted to be an actor. That wasn't really going to happen.”

Possessing a U.S. passport and dual citizenship, via his American-born mother, Herbert was encouraged by jockey Steve Cauthen, who by then had shifted his tack to England, to pursue an industry career in the U.S., rather than be a “daddy's boy” at home. With prominent horsemen George Strawbridge and Russell Jones Jr. serving as intermediaries, Herbert eventually secured interviews with Bloodstock Research and with Santa Anita.

“I heard right before Christmas I got both jobs I had applied for. (It was) Incredibly exciting,” Herbert said. “I decided on Kentucky, and I still don't quite know why. (It was) sort of a gut feeling to go to Lexington versus Santa Anita, which is a very weird decision.”

Although he drew Broadbent's ire by unknowingly arriving late to work on his first day, Herbert soon relished the day-to-day opportunities and access to pedigree information afforded to him in his new position. In particular, the ability to computer generate an analysis between certain stallions and mares for genetic compatibility proved a boon, both professionally and personally.

“I was told when I left Eton College–I wasn't the best academic by a long stretch–but my master told me, 'The one thing we've set you up for in life, Harry Herbert, is how to write a letter.' And so, when I joined Bloodstock Research, I started writing letters to those people who wanted their mares mated and put through the system. I guess I could write a half-decent letter, and suddenly the business began to go really well. People started hearing about it. Arthur Hancock came in, (along with) Nelson Bunker Hunt.

“All sorts of people wanted this service, and I would stay pretty late in the evenings, because I so wanted to study all of my father's pedigrees and why he'd done the matings he'd done over the years. One of those great moments was calling him up and saying, 'Now I know why you made this mating.' He couldn't believe it, as I sort of dissected every pedigree.”

Duly impressed with what he was hearing from his son across the pond, it was natural to expect Lord Porchester would share this information with the Queen.

“My father called me up and said, 'I was talking to the Queen and I thought she might be interested to come to Kentucky and see the stud farms and to see it all for the first time. Maybe you can help organize it. She definitely wants to see how the whole computer thing works and what you're doing on the pedigree,'” Herbert said.

To read the rest of this story on www.brisnet.com, click here.