Home » Archive » Shared News » The Next Generation with Corbin Blumberg

The Next Generation with Corbin Blumberg 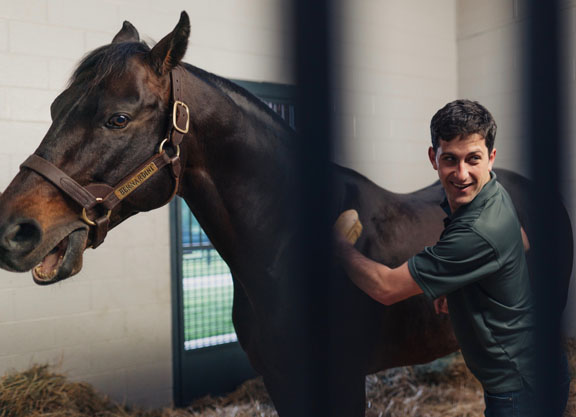 “It's all I've thought about for forever,” said 25-year-old Corbin Blumberg.

And he's not really exaggerating. The Potomac, Maryland native was just a toddler when one VHS tape sold him on horse racing for life. Blumberg learned to read by studying past performances, and has since traveled the world in pursuit of furthering his knowledge of the industry.

Less than a month before this year's Kentucky Derby, the Godolphin Flying Start graduate signed on as the Racing Manager for Starlight Racing. It was an eventful start to the job when their talented Authentic (Into Mischief) sailed to victory in the GI Kentucky Derby and then ran a close runner-up effort in an epic edition of the Preakness S.

KR: How did you get started in racing?

CB: I fell in love with racing when I was two or three years old. My parents bought me a tape, The Best of the Breeders' Cup from 1990 to 2000. I don't know why they bought it for me, but that was it, I was obsessed. I went to my first Breeders' Cup in 2000, which was Tiznow, and after that I was just hooked from there.

I was basically obsessed with racing from then on, and when I turned 16, I emailed Graham Motion. I went and lived with Graham and Anita during the summer. Animal Kingdom had just won the Derby so it was a great time to be there. They're the best; I owe so much to Graham and Anita. I did four or five summers at Fair Hill with them, spent some time in Saratoga, and then went to the University of Kentucky for Equine Science and Management. Then I went and did a program in England called the British Horse Racing Graduate Development Programme, which was awesome. Then I did Godolphin Flying Start for the last two years.

KR: What drew you to the industry?

CB: I think mostly the excitement. I grew up doing Pony Club, foxhunting and eventing, so I was always involved with horses. But I think the excitement of racing and the competition really got me. From there I was hooked. It's all I've thought about for forever.

KR: What was the most challenging part of being a total newcomer in the industry?

CB: I think for me it was when I got to Kentucky and I didn't know anyone. That was definitely a little challenging. Being with Graham and Anita in Maryland was so great because I learned a ton, but Maryland is still a little removed from the epicenter of the industry, which is Lexington. But overall, the industry is so welcoming and inclusive and I got a lot of opportunities just from being lucky and being in the right place at the right time.

There's definitely a barrier there in terms of knowledge at first, but I was so obsessed that I've been reading a Racing Form since I was five, so that helped.

KR: What's your favorite part about the business?

CB: I think the transition from being a fan to actually working in it has been really great. I guess I've always worked in it, but it was always summers, programs and school. Now to be actually working full time, being involved in making decisions and seeing where horses go is really cool. I also love being able to follow some of the horses we worked with through Flying Start.

KR: Tell us about your job now as Racing Manager for Starlight Racing.

CB: Starlight is amazing. Jack and Laurie Wolf started it in 2002, and they've had Harlan's Holiday (Harlan), Hall of Famer Ashado (Saint Ballado), Octave (Unbridled's Song) and Shanghai Bobby (Harlan's Holiday). There was a really amazing history of horses there, and since they've partnered up with SF Racing and Tom Ryan, and with Madaket, this whole partnership has been amazing with Eight Rings (Empire Maker), Charlatan (Speightstown) and obviously Authentic (Into Mischief).

It's been amazing to meet all of our different partners and the people within Starlight, to get to know them and our horses. I really love it, and we'll hopefully get StarLadies some big wins coming up too. I think we just had a really great [Keeneland September Yearling Sale], so hopefully there will be some really exciting horses for the future.

KR: Can you tell us your experience when Authentic won the Kentucky Derby?

CB: I was in Saratoga because we had a few horses running there that weekend. Jack Wolf was in Louisville, but Laurie, who is the managing partner of StarLadies, was actually in Saratoga. I get a bit funny about watching racing with other people, so I went and watched it alone and they were all two houses down. I went nuts when he crossed the finish line and sprinted down to their house. They were actually watching it on the internet so the race was still finishing. There were like 10 people there going nuts, so we went crazy and then had a pretty good night in Saratoga. I couldn't believe it.

KR: If you could change one thing about the industry, what would it be?

CB: The racing side of the industry has always been my passion, so in terms of racing, I think probably the reliance on casino wagering makes me nervous going forward. I love our industry and I love racing, so I think trying to make it as self-sustainable going forward as possible would make me feel a lot more comfortable about the future.

KR: Who is your favorite horse of all time?

CB: So I have two. First is Cigar because that's probably the horse that got me into racing, and then Animal Kingdom, because he was right there when I started at Graham's and was pretty influential. When I started with Graham, there were probably 125 horses, and then the next summer there were 200. Then more recently, Authentic is on top of the list because that was a pretty good start to working at Starlight.

KR: What are your career goals going forward?

CB: Right now, I have the dream job off of Flying Start. I'm so happy, so I'm just trying to make Starlight operate on a day-to-day basis as well as it possibly can-working with Jack and Laurie to make that happen, and with our partners.

Then in the long term, I think for now I just want to stay with Starlight and try and work with Jack there, but definitely being involved with the horses and probably buying some at some point is at the top of the list.

The TDN has partnered with Amplify Horse Racing to present “The Next Generation,” an ongoing video series featuring young people who were not born into the Thoroughbred business, but are now excelling within the industry