The Long Game for Maxfield 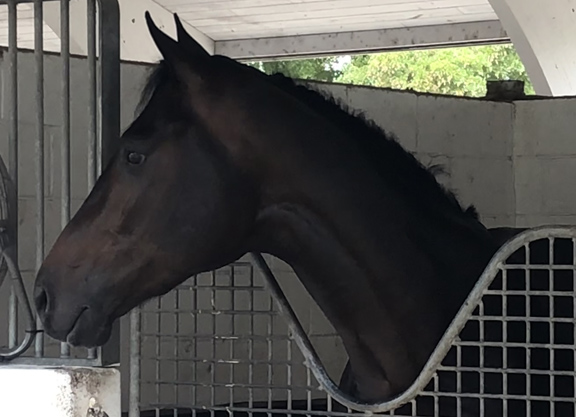 An undefeated Grade I winner heading into last fall’s GI Breeders’ Cup Juvenile at Santa Anita, Godolphin’s Maxfield (Street Sense) appeared well on his way to claiming the 1 1/16-mile championship race and a juvenile title to boot. However, fate intervened. Scratched in the days leading up to the event because of an ankle chip, Maxfield underwent surgery to remove the chip and was subsequently given some down time in Ocala before joining Brendan Walsh’s Florida-based string at Palm Meadows earlier this winter.

“Since we gave him the break, he’s put on good weight,” said Walsh. “Last year, he was a big frame of a horse. He put on the weight and the muscle that we thought he might, and really filled out. He’s the horse that we anticipated he’d turn into last year.”

Despite being sent off at 10-1 in his career, few could have been overly surprised when the dark bay came from off the pace to earn a three-quarter-length victory at Churchill Downs Sept. 14 (video). However, the son of Velvety (Bernardini) undoubtably raised more than a few eyebrows with his tour-de-force 5 1/2-length victory in the GI Claiborne Breeders’ Futurity at Keeneland Oct. 5 (video).

“We thought he was very good, but if you had asked me before he ever ran, what did I expect from him as a 2-year-old, I’d have said maybe break his maiden after two maybe three runs? I wouldn’t have said to you, ‘He’s going to break his maiden first out and then he’s going to come back three weeks later and win a Grade I.’ He exceeded what we really expected of him.”

Was Walsh surprised with the colt’s performance while jumping into Grade I company off a maiden score?

“He came back [from his debut win] and he worked really well,” he said. “He just seemed like he did jump up into where he looked like he was going to be a real good horse. His work before the Futurity was very good. Just the way he did the week leading up to it made me think that he was capable of producing anything. Nothing was really going to surprise me. On the day, he seemed like he was doing great. He went out and he produced a great performance.”

Forging ahead to the Breeders’ Cup, Walsh believed his colt was on course for another top effort.

“He came out of [the Breeders Futurity] great,” the Irishman recalled. “He came out of it golden and worked really, really well just before we went to California. Well, when we went to California, he wasn’t quite right. Nothing horrible. The first couple of days he seemed like he was okay. Then one day, I didn’t think he was moving quite as well as what he might have been. He’s a very athletic horse and he just wasn’t doing quite well. Then the last day we trained him there, we weren’t happy with him either so we brought him back to the barn.”

He continued, “We thought first of all, it might have been a foot issue. We brought him back to Kentucky and when we looked into it [at Rood & Riddle Equine Hospital], it turned out he had a non-displaced chip in his ankle. It was irritating him, and obviously we had to take it out. It didn’t take too much of a decision because like I said earlier, the horse was always gone to be a 3-year-old for us. If things weren’t 100% right, it was a no-brainer to scratch him [from the Breeders’ Cup], really.”

Following the successful surgery, Walsh has been pleased with the colt’s progress since his return to his care.

“He’s back to his old self again,” affirmed Walsh. “He’s doing great. He’s moving great. He looks fantastic. He loves to train, he’s always has loved to train. We’re seeing everything you’d want to see from him since he got back. I couldn’t be happier. I’ve seen nothing negative from the horse whatsoever.”

“Since he came back to us, we’d done a bunch of galloping,” Walsh explained. “We picked up the end of his gallops, three eighths, halves, five eighths the last couple of weeks just to build them into the [Feb. 17] work.”

Given the timing of the setback, often considered a pivotal time in the development of a Derby prospect, Walsh is pragmatic about the chances of getting his charge into the starting gate the first Saturday in May.

“If everything went perfectly and we thought he was doing as well as he possibly could do, then we’d probably take in one of the Derby trials, maybe a month out,” he said. “Roughly a month out, but things would have to really go well because it would be off of a layoff to [try and] take in any of the Derby trials against horses that have had two, three runs this year. To take them on, off of the bench would be a huge ask for any horse. It’s all very well, but the last thing we want to do is do anything wrong by the horse just to make the Derby. If he tells us that he can do it and he can make it, then well and good. If he can’t, then as much as we’d love to go to the Derby, then we’re not going to.”

And while the Derby remains an attractive proposition with a 3-year-old of Maxfield’s quality, Walsh indicated there are many more days and many more top quality races to help fill the colt’s 2020 campaign.

“Nothing surprises me with him,” he said. “He’s a special horse and, like I said, he seems to exceed what you expect of him all the time. We’ll just keep an eye on him and we’ll keep an eye on what’s going on with everybody else as well, and try to come up with the best route possible for him.”