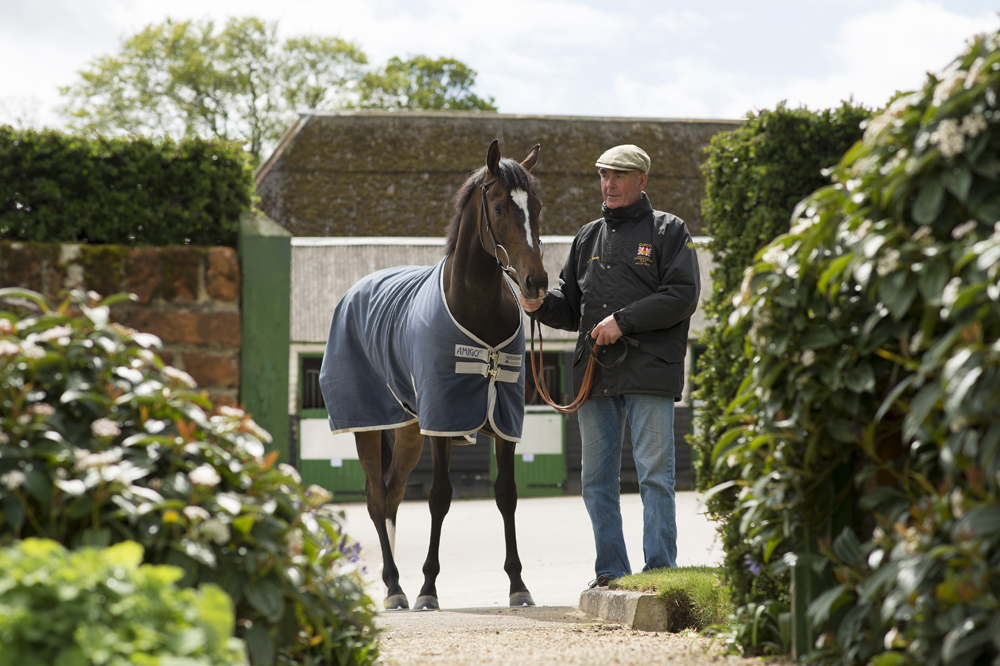 There is no stand-out among the older milers in Europe, and so Saturday's G1 Al Shaqab Lockinge S. at Newbury has many angles as some class acts move up and down in trip to meet in the middle ground prospecting for gold. Going up is Limato (Ire) (Tagula {Ire}), whose two tries at this distance include a fourth in the 2016 renewal which, as far as he was concerned, was blighted by rain. A notorious fast-ground lover, his form when it rides like this is three-from-six with the brilliant sprinters Muhaarar (GB) (Oasis Dream {GB}) and Harry Angel (Ire) (Dark Angel {Ire}), two of those to deny him over six furlongs. The impressive 2016 G1 July Cup and G1 Prix de la Foret winner has looked of late as if he needs further and Paul Jacobs's bay relished the stiff seven furlongs of Newmarket when stamping his authority on the G2 Challenge S. on his last start in October. Trainer Henry Candy said he is happy he will see this trip out. “Mr Jacobs and I decided that we would like to try a mile again, with mainly me pushing it, and once we decided that, the Lockinge was the obvious place to start,” he explained. “I am pretty confident that he will get a mile, but you would be an idiot if you said you were 100% confident. I think he is probably fit enough–his preparation has been remarkably good really considering how the weather has been.”

Reverting to a mile is the G1 Prix de l'Opera heroine Rhododendron (Ire) (Galileo {Ire}), a key member of last year's talented crop of 3-year-old females who has excellent form at this trip despite racing over further for more than a year. So impressive when taking apart Newmarket's G1 Fillies' Mile in 2016, she was arguably unlucky when second after being hampered back over that course and distance in the G1 1000 Guineas last May. Her dam Halfway To Heaven (Ire) (Pivotal {GB}) was an Irish 1000 Guineas and G1 Sun Chariot S. winner at this trip and her dam Cassandra Go (Ire) (Indian Ridge {Ire}) was a high-class sprinter who excelled over five furlongs, so this is a natural step. The three distaffers to upstage the colts here since 2004, Russian Rhythm (Kingmambo), Peeress (GB) (Pivotal {GB}) and Red Evie (Ire) (Intikhab), all had similar profiles in that they had won Group 1 races against their own sex beforehand. “It will be interesting to see if Rhododendron will have the pace for a mile,” Aidan O'Brien said. “If she doesn't, we will have to change things again.”

Two improvers without a top-level success so far are Sheikh Ahmed bin Rashid Al Maktoum's Addeybb (Ire) (Pivotal {GB}) and King Power Racing's Beat the Bank (GB) (Paco Boy {Ire}), with the former bidding to become the first winner of Doncaster's prestigious Lincoln H. to subsequently win in the highest grade. Emulating the 2005 winner of that handicap, Stream of Gold (Ire) (Rainbow Quest), in winning at a level under when readily beating the smart yardstick Stormy Antarctic (GB) (Stormy Atlantic) in the Apr. 27 G2 Sandown Mile, the progressive chestnut has to prove he can transfer his classy soft-ground form to a fast surface. Trainer William Haggas is keen to find out. “I'm not sure about the ground, but I don't think we'll know until we try,” he said. “He surprised me in the Lincoln with how comfortably he won, because while his work had been good and I thought he was a nice horse, I didn't expect him to win like that. Having done that, I hoped he would do what he did at Sandown. He's a genuine horse. He's got much better opposition and much quicker ground to cope with this weekend, but he's done what he's done, so why not give it a shot?”

Beat the Bank had a shot at this level when finishing a disappointing 10th in the G1 Queen Elizabeth II S. at Ascot when last seen in October, but trainer Andrew Balding had said throughout last season that he was a project for 2018. His prior five-length success in the G2 Joel S. at this distance at Newmarket in September was visually impressive and the form looks solid, so trainer Andrew Balding is drawing a line through the QEII flop. “It was pretty testing ground and the end of a long season,” he explained. “He was also a bit keen and free and did not quite finish his race. He's better than that. I'm happy with the horse. It's his first run of the year, but I think we're sending him there as ready as we can get him without a run. It's a very strong race, as it should be, but it will be great to get him back out on the track and he's fairly versatile ground-wise.”