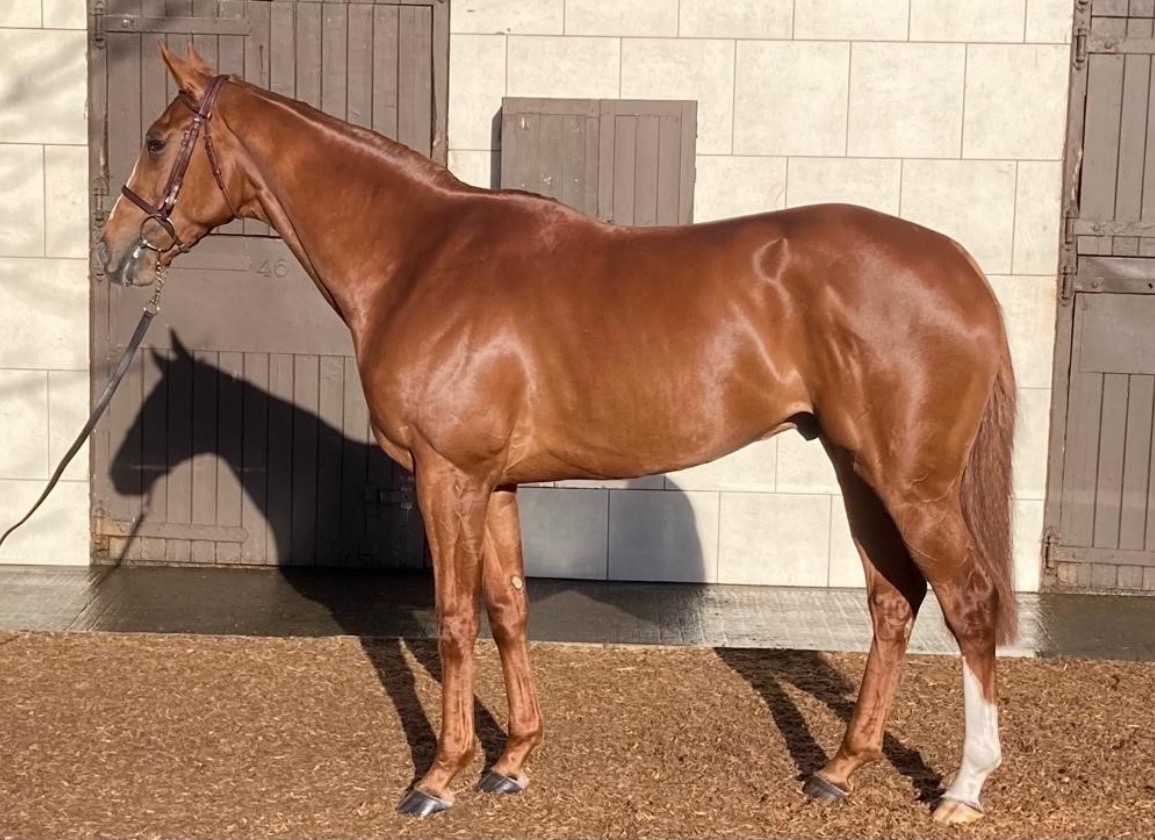 There are stallions with far bigger reputations who will never achieve what New Approach (Ire) has in his stud career. Yet somehow the horse who was champion 2-year-old, became the first Derby winner for Galileo (Ire), and was the joint-highest rated horse in the world in 2008 remains somewhat under-appreciated. It is all the more remarkable–and disappointing–given the hugely promising start made by New Approach early in his tenure at Dalham Hall Stud.

Sit through any breeze-up sale and you will regularly hear the auctioneer espousing the Royal Ascot potential of the 2-year-old in the ring before him. At the Royal Meeting of 2012, New Approach set a new freshman sire benchmark when being represented by three stakes-winning members of his first crop: Dawn Approach (Ire) (G2 Coventry S.), Newfangled (G3 Albany S.) and Tha'Ir (Ire) (Listed Chesham S.). Indeed, Dawn Approach had won his first race before the main breeze-up sales had even been staged that year, and he collected another two wins before his Ascot success. He would remain unbeaten as a juvenile, emulating his sire by gathering the G1 Vincent O'Brien National S. and G1 Darley Dewhurst S. before withdrawing to his winter quarters.

That early star also became New Approach's first Classic winner, gaining revenge for his father's nose defeat by Henrythenavigator in the 2000 Guineas at Newmarket with his own decisive five-length victory on his 3-year-old debut. Come Epsom, Dawn Approach blew any chance he might have had of seeing out the Derby distance by pulling so hard he was almost fly-leaping, but New Approach had other irons in the fire, and a day earlier he had notched a second Classic winner from his debut crop when Talent (GB) won the Oaks. Dawn Approach duly finished last of the 12-runner Derby field, eased down when it was clear his chance had gone, but New Approach's other son in the race, the long-striding Libertarian (GB), flew home from an unpromising position to finish runner-up to Ruler Of The World (Ire), Galileo's second Derby winner.

Bred by the Burns family of Lodge Park Stud, New Approach is of course as much synonymous with Jim Bolger. The trainer had already masterminded the career of his dam, the G1 Irish Champion S winner Park Express (Ire) (Ahonoora {GB}), for Paddy Burns. He also trained her daughters Dazzling Park (Ire) (Warning {GB}), who was runner-up to Daylami (Ire) in the Irish Champion S., and the listed-placed Alluring Park (Ire) (Green Desert), who has gone on to produce the Oaks winner Was (Ire) (Galileo {Ire}), as well as her full-brother and last year's Derby third Amhran Na Bhfiann (Ire).

Park Express's son by Galileo would not, therefore, have been too much of a hard sell to Bolger, who recalls the first time he set eyes on New Approach at Lodge Park Stud.

“He was trotting around with his dam with a bell on her neck because the dam had gone blind,” he says. “And we suspect that's maybe where he got the problem of swinging his head and looking around him. It could have had something to do with that.”

It's rare on these shores to see a horse ponied to the start of a race, as New Approach was for the Guineas and the Derby. The distance of a nose prevented him from being the winner of both of those races, and his imperious track-record-breaking win back at Newmarket for the Champion S. sealed his position on equal footing with Curlin at the head of the world rankings. A certain flightiness was a small price to pay for such obvious talent.

New Approach's stud career has not been plain sailing owing largely to the fact that he is a rig. Despite the fact that logic should dictate that something being in short supply should therefore increase its value, this is frequently not borne out in Thoroughbred sales rings. In New Approach's 12 northern hemisphere stud seasons to date, he has had four crops of foals in three figures, but only just, with the 104 born in his second crop being the largest.

“I suppose a stallion's reputation is very, very hard-earned,” says Bolger. “The ones who are the most attractive are the ones who get the sprinter-milers because that leaves a lot of people happy–it leaves the commercial breeders very happy and it leaves the new owner happy. There are fewer people whose targets are the Classics so there's reduced patronage there then right away as the pool of buyers is smaller.”

As the breeder of Dawn Approach and the 2000 Guineas winners in Britain and Ireland this year, Poetic Flare (Ire) and Mac Swiney (Ire), respectively sons of Dawn Approach and New Approach, Bolger has done more than most to demonstrate that this sireline is far from just a one-dimensional source of later-maturing middle-distance horses.

“New Approach did get a Coventry winner in his first crop, so that should have helped, but for whatever reason it didn't, and then of course Dawn Approach went on to win the Guineas and the St James's Palace the following year but I don't think that worked any miracles either,” Bolger adds.

Sam Bullard, Darley's director of stallions, says, “His being a rig, and therefore his limited size of books, is undoubtedly a hindrance, so the commercial aspect is always difficult.

“His fee is listed as private because we would rather have the opportunity to discuss it with breeders, and look at the mare's breeding record, and we can then say 'he's £30,000 but let's look at the best way  to help both sides'.”

Certainly his compromised fertility has not helped his case, but New Approach did get his Derby winner in 2018 when Masar (Ire), inbred to Ahonoora and a certain Urban Sea, gave Sheikh Mohammed a long-awaited success in the Godolphin blue. The following year his grandson Madhmoon (Ire) was second to Anthony Van Dyck (Ire) (Galileo {Ire}).

Madhmoon's sire Dawn Approach was not represented by his first Classic winner until this year, following his return to his birthplace of Bolger's Redmondstown Stud after standing seven seasons at Kildangan.

“He will probably cover about 50 mares this year so that could resurrect his career, and Poetic Flare has done much for him as well so hopefully there will be more to come,” says Bolger.

Meanwhile Masar, who had the speed and precocity to beat subsequent crack sprinter Invincible Army (Ire) on debut over six furlongs in the May of his juvenile season, is now in his second season alongside his sire at Dalham Hall.

“Masar has everything going for him,” Bullard says. “He sold himself when people came to see him last year because I think they expected him to be a bit of an 'on-the-leg' New Approach, and he's not. And his 2-year-old form actually mattered more, sadly, than some of his middle-distance form.”

He adds, “We stood him at £15,000 because that was a price at which they had to come and look at him. You can't not look at a Derby winner with a pedigree like his. He was full in year one with 140 mares and this year he is nicely through 100 again.”

It falls now to Poetic Flare, Mac Swiney and their creator Jim Bolger to continue to remind his fellow breeders of the potential of this branch of Galileo's ever-expanding sireline. They have a 2000 Guineas apiece, and colts have retired to stud with less impressive credentials than that, but one senses neither they nor their trainer are finished yet. Bolger is now setting his colts on diverging paths following their wafer-thin split when first and second in the Irish 2000 Guineas. We hope to see Poetic Flare at Ascot, aiming to emulate his sire in the St James's Palace S., while the likeably tenacious Mac Swiney will bid to do the same for New Approach at Epsom on Saturday.

Bolger is upbeat when appraising Mac Swiney's recovery from his exertions on the Curragh just two weeks ahead of the Cazoo Derby. He says, “He's very well and as fresh as paint today so hopefully we will get him there in that form. He doesn't have any more work to do now, he's just exercising.”

Casting his mind back to the Irish 2000 Guineas, he continues, “I wasn't surprised that they were first and second but I wasn't convinced that it would be in that order. It was nice to watch for the last furlong. I did make one mistake because I meant to tell Kevin [Manning] and Rory [Cleary] that there were to be no whips if they had the race won. I had intended telling them and I forgot to do it, but they are both very hardy horses and they are none the worse.”

Bolger adds, “They have never galloped together [at home] but we have always held the two of them in high regard and we knew that there was never very much between them, except that when Poetic Flare eventually blossomed into what he is now he was much more muscled up and he looks stronger than Mac Swiney. But Mac Swiney is deceptive strength-wise. He's compact but he's very strong also, but he doesn't show the same strength as Poetic Flare.”

Epsom's topography presents its own unique challenge, but the trainer feels that it is one Mac Swiney will be able to rise to, even as the ground dries out on the Downs.

“For me he would seem to be the ideal candidate,” says Bolger. “He's a lovely horse with a lovely attitude. I think he'll be fine [at Epsom]. He takes everything in his stride. He's very well balanced and he goes downhill here at home the same as he comes up it.”

A number of trainer/breeders have enhanced the Derby's rich history which is closing in on 250 years. The 1908 victory for the filly Signorinetta (GB) two days before she successfully backed up in the Oaks for the romantically inclined Cavaliere Edoardo Ginistrelli is one such fantastic fable, while Arthur Budgett remains a personal racing hero for his training of the homebred Derby-winning half-brothers Blakeney (GB) and Morston (GB).

For the depth of his connection to Mac Swiney, who boasts three individual Derby winners in his first three generations and was the first Group 1 winner to be inbred to Galileo, Jim Bolger would surely enter Derby folklore if the son of New Approach out of a mare by another former stable star, Teofilo (Ire), is to secure the third Classic of the season for his team at Coolcullen.

In his 79 years, Bolger has seen enough of the sport's twisting fortunes to not get too carried away by sentiment even as the Derby is now just days away and when he is likely to be represented by two runners as a breeder. The Mark Johnston-trained Gear Up (Ire) (Teofilo {Ire}), winner of the G1 Criterium de Saint-Cloud, is also a Redmondstown Stud graduate.

He does, however, allow himself to appreciate being in what is an unusual position for most breeders by having played as significant a role in the careers of the sires involved as he did for the female families of his proteges.

He says, “To have horses like those two, no matter what they were by, is a great sense of satisfaction, but for them to be by the stallions that we've been so close to down the years adds to that enjoyment.”