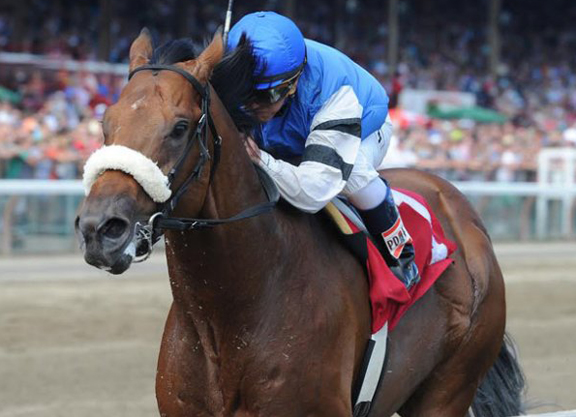 The Big Beast | A. Coglianese

Alex and JoAnn Lieblong's The Big Beast (Yes It's True–V V S Flawless, by Deputy Minister), winner of last year's GI King's Bishop S., has been retired from racing and will stand at Ocala Stud in 2016.

Including the King's Bishop, the hulking bay reeled off four consecutive wins between July of 2014 and March of this year. Second by a nose to the late Rock Fall (Speightstown) in Saratoga's GI Alfred G. Vanderbilt H. Aug. 1, the Anthony Dutrow-trainee recently added another runner-up effort behind GI TwinSpires Breeders' Cup Sprint hopeful Private Zone (Macho Uno) in the GI Forego S. at the Spa Aug. 29. From nine career starts, the 4-year-old posted a 9-4-3-1 record with earnings of $676,300.

“The Big Beast was a tremendously fast and talented Grade I winner on the track, and he's an imposing individual,” said J. Michael O'Farrell, owner of Ocala Stud. “The Big Beast proved he was one of the best sprinters in the country over the last couple years, and he's from a sire line that's been successful in Florida. We're very excited to work with owners Alex and JoAnn Lieblong on standing The Big Beast, and we believe breeders are going to really like him.”

The Big Beast is a son of Florida champion freshman sire Yes It's True out of the stakes-placed mare V V S Flawless. A stud fee will be announced in the near future. For more information about the colt, contact David or Joe O'Farrell at 352-237-2171 or visit ocalastud.com.