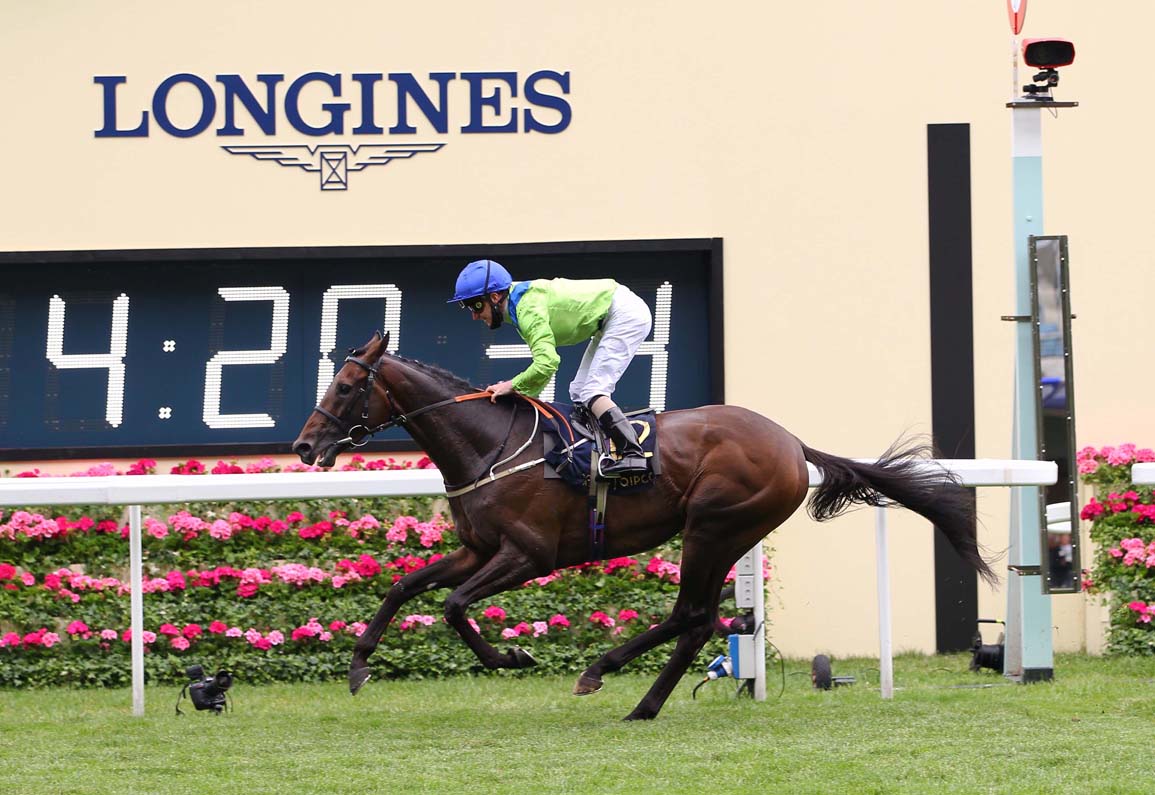 There was to be no fourth Gold Cup for Stradivarius (Ire) (Sea the Stars {Ire}) on Thursday, as the King of Royal Ascot had to surrender his crown to the ultra-impressive Subjectivist (GB) (Teofilo {Ire}) in a renewal set to enter into the meeting's folklore. While Mark Johnston's relentless galloper was a worthy winner and can justifiably be viewed as one of the race's best, the outcome was marred by the trouble-in-running that the three-times winner encountered as the fortune of the Gosden icon met an abrupt turn. Stuck in traffic on the inside with nowhere to go three out, the 5-6 favourite was too far adrift of his nemesis by the time he was freed at the top of the straight. Perfectly positioned by Joe Fanning shadowing the leader Amhran Na Bhfiann (Ire) (Galileo {Ire}) throughout, the 13-2 second favourite Subjectivist who was coming here off a break having followed up his G1 Prix Royal-Oak win in the G2 Dubai Gold Cup at Meydan Mar. 27 was more than willing as soon as the command was given. Out on his own as many eyes turned back to track the progress of the black-and-yellow in behind, it was Dr Jim Walker and not Bjorn Nielsen who was able to relish the closing stages. Hitting the line hard to record a five-length verdict over Princess Zoe (Ger) (Jukebox Jury {Ire}), he was confirming the form of the Royal-Oak in the process as the well-backed Spanish Mission (Noble Mission {GB}) finished half a length away in third. Stradivarius was left to pay late on for his frantic two-furlong pursuit and under tender handling from Dettori ended up 1 3/4 lengths further behind in fourth. “He's been a great horse and he keeps improving,” the popular and talented Kingsley House stalwart Fanning commented. “Five out, I was able to get breathers into him and fill him up, so I thought it would take a very good one to get by. In Dubai on good ground, he was doing his best work at the end and I never felt the distance was an issue. He goes on any ground and it's great for the yard and brilliant for the owner. He's been with us for years and even when they run bad, he's very good with us.”

Subjectivist, who was ironically caught close home by Tuesday's Listed Wolferton S. winner Juan Elcano (GB) (Frankel {GB}) on his 2-year-old debut, managed a second in the Listed Stonehenge S. during that campaign but was always going to be one for middle-distances and beyond. Third giving weight to Hukum (Ire) (Sea the Stars {Ire}) in the 12-furlong King George V S. at last year's Royal Ascot, the bay captured the 11-furlong Listed Glasgow S. at Hamilton and was third in the G3 Gordon S. back at a mile and a half at Goodwood during July. Seventh in York's G2 Great Voltigeur S., he first served notice that something was afoot when beating the useful Cabaletta (GB) (Mastercraftsman {Ire}) by 15 lengths upped to 14 furlongs in Goodwood's G3 March S. in August. Seventh again in Doncaster's G1 St Leger in September, he bounced back from that to make all and beat the smart Aga Khan filly Valia (Fr) (Sea the Stars {Ire}), old-stager Holdthasigreen (Fr) (Hold That Tiger) and Princess Zoe in the Royal-Oak staged on heavy ground over 15 1/2 furlongs at ParisLongchamp.

If he was in danger of being pigeon-holed as a soft-ground specialist, Subjectivist's performance at Meydan meant that no longer held sway and John Gosden had been keen to stress how respectful he was of the Johnston raider as Stradivarius's day of reckoning loomed. Things went smoothly the whole way for the eventual winner here, who kept last year's Derby third Amhran Na Bhfiann honest up front with the champion tucked way back on the rail. With Princess Zoe on the outer keeping him pinned, Frankie's big problem was always going to be the presence of the German runner Rip Van Lips (Ire) (Rip Van Winkle {Ire}) on the rail and as his inexorable progress met with that rival's regression the inevitable occurred. Turning into the straight, horses were falling back on top of him and he lost vital momentum there but not the race. Interestingly, the two 2020 rivals who came back to take him on again this year, Nayef Road (Ire) (Galileo {Ire}) and Mekong (GB) (Frankel {GB}), were beaten around the same margins suggesting that for all he had a bump in the road he definitely met one better stayer and possibly two others.

Mark Johnston had won this in 1995 with Double Trigger (Ire) (Ela-Mana-Mou {Ire}) and in 2001 and 2002 with Royal Rebel (GB) (Robellino) and had since made no secret of how much he coveted another of these. Denied by Stradivarius with Dee Ex Bee (GB) (Farhh {GB}) and Nayef Road in the past two years, he started 2021 with serious ammunition in Subjectivist and his half-brother Sir Ron Priestley (GB) (Australia {GB}) and the chosen one duly brought the Cup back to Middleham. “I was more hopeful than confident beforehand, but I did think he was the best horse I have taken Stradivarius on with,” he said. “He had a scare after Dubai and missed quite a bit of work and then fell on the road the other day on his knees and hocks. Normally he would have had another run in between, so it's probably good that the rain stayed off as you don't see performances like that on soft ground.”

“It's a sad day for Stradivarius, but I know what that feels like when a champion goes under and if his run had to end one day I'm just glad it's us that did it,” Johnston added. “Joe deserved this a long time ago and I don't think there is any better than him on the lead. Of all the thousands of winners he's ridden for us, we've never told him where to be in the field. He went the perfect pace all the way round. You couldn't necessarily say he was a horse with better credentials than my recent runners like Dee Ex Bee, who was second in the Derby, but what he did have in his favour was he is very much on the up with his last two races being his best. He was very much the young pretender against the old guard. This was his number one target and we'll think about the [G1] Goodwood Cup now and he'll come back here next year if he can. There is so much money to be won abroad during the winter time these days, we will keep one eye on that–he actually didn't get an invite to Saudi this year due to a quirk with the weight-for-age.”

John Gosden said of Stradivarius, “It didn't go to plan. I thought the winner was most impressive, but we were a long way back, had the filly beside us and couldn't get out.” Princess Zoe's trainer Tony Mullins commented, “Everything will revolve around the Prix du Cadran, with whatever presents itself beforehand. I think we've been beaten by a great champion and she's run the race of her life. The owners have expressed a view to consider the Cheltenham Festival. She's jumped a few and seems to enjoy it, but it's whether her legs would stand it and it's just a thought.” Andrew Balding said of Spanish Mission, “We're thrilled with his run and might look at the Goodwood Cup.”

Subjectivist is the third foal out of the triple listed-placed Reckoning (Ire) (Danehill Dancer {Ire}), with her second being the aforementioned Sir Ron Priestley who took this year's G2 Jockey Club S. having been runner-up in the 2019 St Leger. Also responsible for last year's G2 Rockfel S. third Alba Rose (GB) (Muhaarar {GB}), she is kin to the GIII My Charmer H. runner-up Hope Cross (Ire) (Cape Cross {Ire}) and a granddaughter of Aspiration (Ire) (Sadler's Wells) who is a full-sister to the G1 Gran Criterium hero and G1 Irish Derby runner-up Sholokhov (Ire). That connects her to the G1 Irish Derby and G1 Coronation Cup hero Soldier of Fortune (Ire) (Galileo {Ire), the G1 Dewhurst S. winner Intense Focus (Giant's Causeway) and the G1 Moyglare Stud S. heroine Skitter Scatter (Scat Daddy). Reckoning's 2-year-old filly is by Ulysses (Ire), while she also has a yearling colt by Roaring Lion.