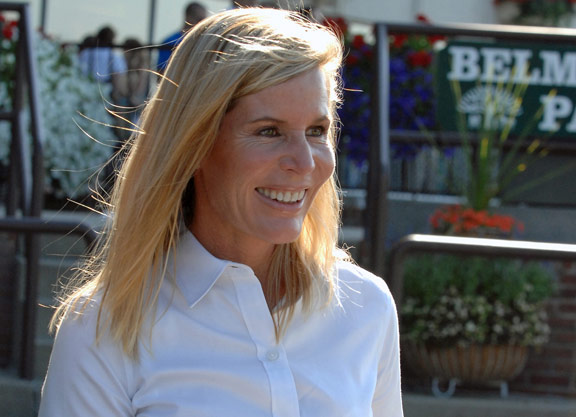 A New York court has granted Linda Rice a temporary injunction that allows her to resume training while she pursues a legal appeal of the three-year license revocation and $50,000 fine for “improper and corrupt conduct” levied against her by the New York State Gaming Commission (NYSGC).

The ban went into effect Monday. Later on June 7, Rice's legal team filed a complaint in the Schenectady County Supreme Court alleging that the penalty is “unduly harsh.”

Daily Racing Form first reported the June 9 granting of the injunction. TDN could not reach Rice or her attorney for comment.

Rice had one entry scratched at Finger Lakes Monday because of the ban, but her lone starter Wednesday ran second at that track. She has 10 entrants over the next four days at her Belmont Park base.

Rice's court complaint seeks a declaratory judgment that would either annul or vacate her penalties for receiving race-entry information about rival horses from New York Racing Association employees while paying some racing office workers thousands of dollars in “gifts” between 2011 and 2015.

Culminating an investigation that stretched over five years, NYSGC members voted 5-0 on May 17, to agree with a hearing officer that Rice's years-long pattern of seeking and obtaining pre-entry information from NYRA racing office workers was “intentional, serious and extensive [and] inconsistent with and detrimental to the best interests of horse racing.”

Andrew Turro, Rice's lawyer, told the Form that “We are very happy about today's decision. The court's order restores Ms. Rice's ability to get back to racing and training immediately. We also look forward to challenging the commission's order in the court and ultimately vindicating Ms. Rice's rights.”