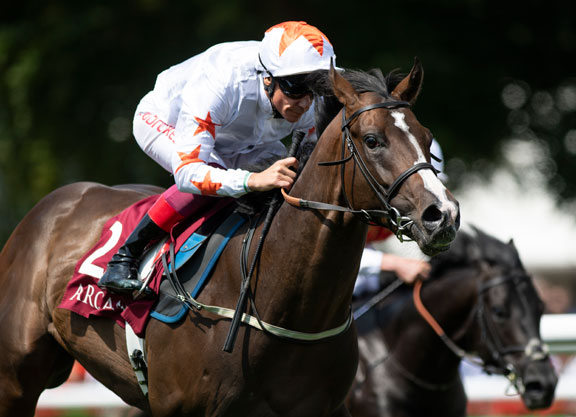 With a pair of black-type juveniles to his credit already this season, Showcasing (GB) sits third on the European 2-year-old sire list, and is very much building on the foundation laid by champion sprinter Quiet Reflection (GB) from his second crop. That standout mare was conceived at just £4,500 at Whitsbury Manor Stud, and in the six years since Showcasing's fee has climbed to £35,000. Fresh off wins by Showcasing's Soldier's Call (GB) in Royal Ascot's Listed Windsor Castle S. and Advertise (GB) just last week in the G2 Arqana July S., TDN's Alayna Cullen caught up with Whitsbury Manor's Ed Harper to talk about Showcasing, and we have an excerpt from her video interview here.

AC: So far, 2018 has been an exciting year for Showcasing. Can you tell us a little bit about his successes on the track so far?

EH: 2018 was always going to be the year that people were really putting the spotlight on him, as it's the first year the 2-year-olds have been bred from a slightly increased fee. The 2-year-olds this year were bred on a £15,000 fee. He's already had a couple of stakes winners; he had the Royal Ascot winner for Archie Watson and now he's had the July S. winner. He's had a lot of very promising 2-year-olds run. He's had seven individual 2-year-old winners already this year, but a number of seconds first time out that I've been equally excited about. I couldn't be happier.

EH: It's gone very well. He covered 140 mares and got 136 in foal, which we are very proud of. He's always been very fertile, but the fertility actually gets easier as their fees increase, with the quality of mares coming to him. We're always going to limit him to the number of mares he's covered because our clients do like the fact that we never go mad on numbers. And we've always done that across the board with our stallions.

AC: Can you tell us about any particular mares that have gone to him this year?

EH: He's had a host of group winners this year. I've never been one to sound too smug over the phone when you book a big one in, because I think they could come from all sorts of places. But he has covered quite a few Pivotal mares this year, which is encouraging with Advertise being out a Pivotal mare. He's also beginning to have a nice record with Dansili mares, I think. He got sent quite a few of them. So, it was a nice book across the board, and we sent I think 20 of our own group mares to him.”