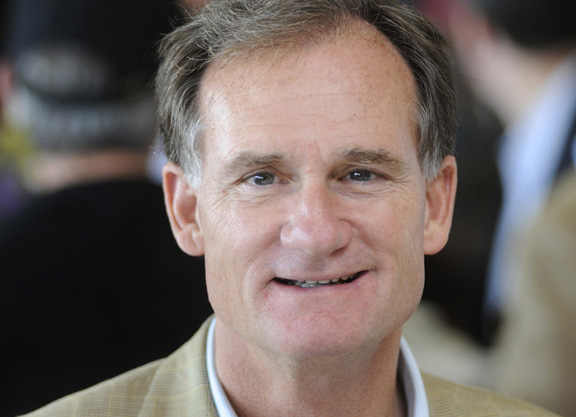 For the past two years, Jimmy Bell has been the President of the Board of Directors of the Thoroughbred Aftercare Alliance, the non-profit organization which accredits, inspects and awards grants to approved aftercare organizations. As his two-year term comes to an end, he sat down with the TDN’s Sue Finley to talk about what he’s learned, and where the industry needs to be in terms of aftercare.

SF: Why did you agree to take this on?

JB: Before the TAA, I think I was a typical person in the industry regarding my thoughts on aftercare, and I think my path represents what the TAA has come to be about. It’s about awareness, and once you become more in tune to it, I think we would all agree that having been in this industry all of our lives, we can recognize some shortcomings and some things that have been overlooked and which were very deficient. There is no question that the word `aftercare’ didn’t come into the nomenclature until three, four, five years ago. Certain events certainly brought some attention to it, but I think it was a realization of how little we as an industry were doing and how much there was to be done.

That’s one answer. The other is that these horses deserve it. Period. It’s the right thing to do and there’s no grey area to it. It’s a needed and just cause.

SF: You say you were a typical person, pre-TAA? What does that mean?

JB: I think we are all guilty of getting so focused in our own world that we don’t really step back and take a look at the bigger picture. Your head is somewhat down and you’re focused on what you’re doing. Just because these horses have concluded a racing career doesn’t mean that’s the end of their career and to see how many ways that horses have to go on and lead productive lives has really been very, very interesting to me. There are so many facets to it. Obviously, there are the TRF’s prison programs, and we’re aware of retraining and being able to be in all types of showing, and working with young people, and taking care of disadvantaged people. There are numerous things that are out there that really benefit everyone-the people and the horses. But it takes a lot of money, and a lot of organization and a lot of funding to do this. It’s certainly a new world, but one that’s vitally important to us as an industry.

SF: How much has the TAA granted?

SF: How much will it take to get the job done?

JB: That’s a fair question. We all are beginning to understand the scope of what we’re dealing with and the needs that are out there. Right now, through this phenomenal accreditation process, we have accredited 56 organizations at 180 locations, which were all physically inspected in just three years.

SF: When the plan was initially announced, the TAA talked about an incremental institutional funding mechanism. That really hasn’t happened. Why?

JB: I wish I knew that answer. As an organization, we’re still evolving. We’re learning. I guess my direct answer is that we went through that initial awareness, that warm and fuzzy feeling. “Oh yes, that’s great. That’s good.” The idea was to make this painless; $5 on a $10,000 transaction in the sales ring. We were trying to get touchpoints at every place. I think that’s a great idea, but very difficult to institute, follow through and coordinate. Each one of those things is very difficult to do and I think after that initial awareness, then comes the next wave, as an industry, of how significant is this to the overall industry. So I think we’ve done some great, great things early on, the most important of which is our own education as an industry, our own understanding, our own awareness that there is a responsibility to this.

What I would tell you too is that somehow, somewhere, sometime, we need to move past the idea that the TAA is a charity. It’s a responsibility. It’s a part of being an owner. It’s a part of the business. And that is a message. You can’t force this too quickly. And I think we’ve been soft, purposely, but I think there will come a time when the industry is going to have to decide how important this is. That’s the bottom line here. The good news is that we have developed the only accrediting aftercare organization and we have done it with a tremendous amount of input and refinement. When they go through this accreditation process and then the award process of who gets how much, it is a very complex and very rigorous. I have been a part of many, many ideas and operations and organizations that never quite got off the launch pad. Well, this one did. And I think that says a lot because what it really says is how important it is for the industry. But this has to be an industry deal. And this is really not an individual thing, or a wannado thing. To me, a charity is a choice. This is a responsibility. That’s the bottom line.

SF: In your mind, is aftercare more important as a moral tenet, or from a business standpoint for the industry?

JB: It’s whatever makes you as a person feel better about it, but the bottom line is, there are all types of folks out there. There are people who look at this purely as a business. There are people who look at this as something they get pleasure from, and there are all types of both. But however you look at it, aftercare should be a bottom-line expense to your operation, no different from paying the van bill, or the training bill. You need to say, `this is a part of my participation in this great sport.’

JB: It’s really, in the purest sense, very fair to participate at every level that you participate in. If you are in the stallion business and own multiple shares, well, that’s really what that one-quarter of one season of your fraction of the share is. If you’re a big commercial sales person, and you happen to be in the stallion and the sales business, those are not mutually exclusive of each other. They are all profit centers. That’s just another avenue of participation. Five dollars on a $10,000 transaction, we can call it a lot of different things, but that’s part of one’s operational business plan. If you want to look at it as an expense or the cost of doing business, fair enough. Or if you want to think you’re in this great business and this is your obligation toward the business, I think it’s whatever the individuals feel comfortable in their own minds. It gives flexibility for people to understand that this can be approached on more than one level.

SF: Oftentimes, the horses most at jeopardy are those operating at the bottom end of racing’s economic food chain. How do you get past the point where so often, the people making decisions on horses’ aftercare, can’t afford, or feel they can’t afford, to do the right thing?

JB: I think that we like to think for everyone, whatever their connection to this horse is, it is their livelihood. You cannot dictate how people act and behave, but I think it really gets back to an accepted awareness or education. As more and more of this becomes mainstream, we really need to get to the point where you’re not thinking, it’s just a part of the everyday aspect of the business. I don’t think there is a mechanism in place for that, but I think the more that people from top to bottom truly stop and have to take a good look at this, that this awareness and education all around you begins to sort of permeate into our whole fabric of the industry. Is it going to be perfect? Nope. Never. But we’ll certainly be able to throw a lot larger net over this whole situation than we ever have before. I don’t think there’s a perfect outcome. I think that’s unrealistic to think there could be. But we’re sure getting after it in a way where we’re going to be a lot further down the road about doing the right thing than we ever have before.

SF: How will you continue to participate?

JB: One of the great privileges I’ve had in working for Sheikh Mohammed and Godolphin is that you’re able to step back and look at the bigger picture. That’s really what Sheikh Mohammed is about. A lot of this begins and ends with his vision. Sheikh Mohammed has the ability to see the importance of this, and make a big push for awareness on an international level. Godolphin brought in as many people as they could from all over the world to have a meeting here last year on this subject, and it was an eye-opening experience for them. They had them all back in Newmarket to do it again this year as well. I am fortunate to be able to be a part of that. A rising tide truly raises all ships.

To learn more about the TAA, or ways to give, visit http://www.thoroughbredaftercare.org/ways-to-give/

This story was posted in Q&A, Shared News, Today's Edition.