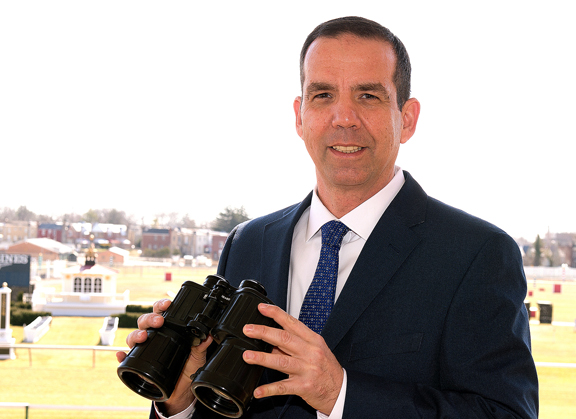 BALTIMORE, Md – TDN Senior Editor Steve Sherack caught up with track announcer Dave Rodman as he gets ready to call his 28th straight GI Preakness S. at Pimlico Saturday. The native of New Orleans has been the voice of Maryland racing since 1991. Undefeated GI Kentucky Derby winner and 'TDN Rising Star' Justify (Scat Daddy) is slated to arrive at Pimlico Wednesday afternoon.

Q: What did you think of Justify's Derby win and what's the excitement level like with him heading to Baltimore shortly?

DR: He ran his race and answered all the questions that the doubters had. He looks like he's going to be odds-on in the Preakness and it's very exciting to have a horse of his quality coming into the second jewel of the Triple Crown undefeated. I'm anxious to see him in the flesh given the good-looking video I've seen of him training since the Derby.

Q: Any specific memories from Triple Crown winner American Pharoah's runaway win in the Pimlico slop in the Preakness stand out to you?

DR: I started here in 1991 and it took all that time to call a leg of a Triple Crown winner [laughs]. The thing about the race that I'll always remember is the tremendous downpour right as the horses came on the track. They really disappeared after the post parade–you couldn't see anything. The rain was coming down so hard that I wrote down things on a yellow legal pad to say just in case I couldn't see anything heading from the five-eighths pole to the top of the stretch. But the rain let up and it was an amazing performance.

It was kind of surreal when he came back to the winner's circle. Usually the Preakness winner is paraded in front of the grandstands and it rained so hard that most of the crowd was inside. I remember saying, 'Let's hear it for American Pharoah!' It was like we were filming a movie and the sound effects had to be added in later.

Q: Growing up in New Orleans, were you always a fan of racing? How did you catch the bug?

DR: My dad was a racing fan–just a normal, everyday bettor. He always used to keep track of his wins and losses on the back of his program. We'd go to the races at Fair Grounds and Jefferson Downs. At that time, you couldn't get into Jefferson Downs without being a certain age, so he would sneak me past security. Great memories, of course, and I got my first job [announcing] at Jefferson Downs later on [in 1981], too. New Orleans was a great town to grow up and is one of the best places to get weaned on the game.

Q: When did your announcing dream begin? Was it something that you always wanted to do?

DR: My first job out of high school was in radio as a Top 40 deejay, and I did that for a long time. As radio kind of changed during the late '70s, I went back to my roots of racing and started walking horses at the old Jefferson Downs and also at the Fair Grounds for Billy Mott, Frankie Brothers and Jack Van Berg. Just hot walking to pick up a few dollars. Then the [announcing] job came open at Jefferson Downs and I began to practice on the roof–that was how I got my first gig.

Being a deejay, and especially a fast-talking deejay, back in those days kind of set me up for avoiding any kind of shyness on the microphone. It was a great foundation to become a racetrack announcer.

Q: How would you describe your announcing style? And who are some of the announcers that have influenced you?

DR: Hopefully, accuracy is the number one thing and being easy to understand. My style has evolved over the years and has become a little bit eclectic-kind of picking up a little bit here and a little bit there. Initially, it was more like a Dave Johnson style. The people that I grew up listening to had a great influence on me, like Dave Johnson and Tony Bentley at the Fair Grounds. At that time, the Trevor Denman influence was just kind of kicking in.

There will never be another announcer like the great Tom Durkin. He also influenced me quite a bit in preparation and setting up any moments of drama that may come into play during the running of a race. It's a little bit of everyone and even lots of announcers that are currently working today.

Q: How difficult is it to call the races with all of the tents/marquees set up in the infield during Preakness time?

DR: It's always been an issue. This year will be the first Preakness where basically 40% of the race is called from a television monitor. The tents and obstructions–specifically heading past the half-mile pole into the five-sixteenths pole– pretty much block all of my view. It really seems like an eternity when they disappear behind the tents.

The other day I looked up and said, 'Well, wait a second. Where are the horses?' It's frightening when you go back to the binoculars and you can't find them. Hopefully, I won't get that moment at around 6:30 p.m. on Saturday.

It takes a little bit of ad-libbing, but I guess you never get used to it. Pimlico's really done a great job putting up different camera angles. There are a couple of new ones added this year, too. A lot of times what you're seeing on television is basically what I'm seeing as a caller, especially around the far turn.

Q: What have been some of your favorite moments behind the binoculars calling the Preakness? I'm sure your first one with the Frankie Brothers-trained Hansel winning in 1991 has to be right up there.

DR: Being from Louisiana, Frankie Brothers was the kingpin back in the day at LaD, and here he comes in my first year with Hansel. He was a runaway winner, which made it better for me, because boy, I'll tell 'ya, those binoculars were shaking! No matter what anybody says, you're still going to get a little bit of butterflies in your stomach, especially moving from a smaller track [Rodman announced at Louisiana Downs from 1985-91] onto the bigger stage.

Silver Charm's Preakness was another special one because of the local angle with trainer Gary Capuano and [narrow Derby runner-up and Preakness third] Captain Bodgit. Smarty Jones and his margin of victory of 11 1/2 lengths also sticks out. I've got that in the back of my mind this year if Justify runs his race.

Afleet Alex was just a stunner when Scrappy T bore out and Afleet Alex and Jeremy Rose almost went down. Big Brown was an easier one to call–he just blew them away at the top of the lane and it was over–the filly Rachel Alexandra making history, and more recently with fan favorites [California] Chrome and [American] Pharoah. It looks like we've got a chance for another Triple Crown this year.

Q: Anything you enjoy most in the lead-up during Preakness week? Between the Alibi Breakfast, post position draw, activity at the stakes barns in the morning, there's certainly plenty going on.

DR: The place slowly builds into a buzz. A lot of media people start arriving by Tuesday and a lot of the preparations and the infield are pretty much 80% complete.

I enjoy walking around the barn area in the morning and being able to get so close to the horses-it's just 50 yards away from the press box elevator to the lower level-and catching up with old friends like Tom Amoss and some of my Louisiana buddies.

There's just so much going on and being able get the feel and build of the excitement for Black-Eyed Susan day and Preakness day is great.

DR: I've seen some peaks and some valleys being here for so long. We ran 52 weeks a year pretty much when I started in '91, then things slackened up in the late '90s and early 2000s. But now the Maryland-bred program is strong and there's a number of brand new first-season sires coming to the state, too. The breeding industry here is on an upswing and people seem to have a lot of interest in buying Maryland-breds.

The fields and field sizes are picking up-I'd much rather call a 12-horse race than a five-horse race any day. There's just so much more you can do with it.

The renovations at Laurel–I run into fans probably once every few weeks there that maybe hadn't been out in three or four years that say, 'Wow, this is really something else.'

It's an exciting time here, but there are some challenges ahead with Pimlico and the aging infrastructure. The good thing is Maryland has the luxury of having two very good racetracks more than anything–the turf and dirt at both Pimlico and Laurel are exceptional. There are certainly options available for whichever direction it takes.