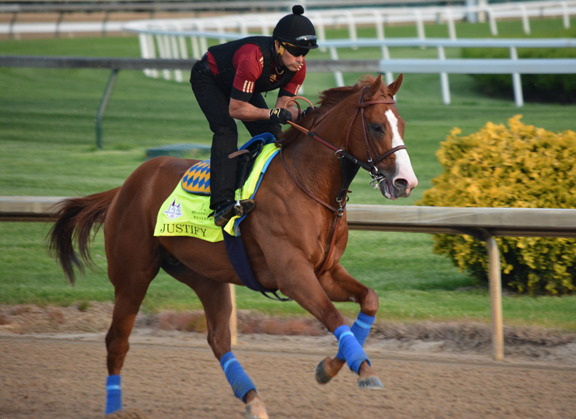 Justify looms as a daunting odds-on favorite in the GI Preakness S., and any attempts to find weaknesses in his commandingly impressive body of work are going to have to center on unknowns beyond his undefeated past-performance block, like whether or not the Derby took more out of him physically than the betting public will perceive. There's no getting around the fact that this 'TDN Rising Star' toyed with the best horses in a fairly accomplished crop while demonstrating a keenly-honed aggression and mental poise beyond his four-race career. If a full field of 20 with plenty of speed on paper couldn't soften up this undefeated, long-reaching $500,000 KEESEP Scat Daddy (Johannesburg) colt in the GI Kentucky Derby, how are his seven Preakness rivals going to accomplish that task in tag-team fashion in Baltimore? Rain in the forecast would also seem to play in Justify's favor, although it's not a lock that an affinity for off goings at Santa Anita and Churchill will translate to success in the mud at Pimlico. The guess here is that jockey Mike Smith will decide to do away with any potential pace drama and use Justify's athleticism to secure the lead straight from the gate, and it will be up to any other rivals who want to try to run with him to give it their best shot. A percolating rivalry with Derby runner-up Good Magic (Curlin) is a welcome Preakness subplot, and at the risk of being a master of the obvious, the second jewel of the Triple Crown should come down to these two standouts hooking up on the far turn and into the stretch—except with a closer margin between them at the wire.

Justify gets the “likeliest winner” honor, but Good Magic looms as the better Preakness wagering value as the second (and perhaps even slightly overlaid by off time) favorite in the betting. This million-dollar KEESEP Curlin colt's second-place effort in the Derby amounted to what would have been a winning Run for the Roses in many years, and while Justify's Preakness chances will still be questioned by doubters based on the “too much too soon” theory, you can't say the same thing about Good Magic. If anything, he has a decided edge in experience and race spacing in making lifetime start number seven (five of them in graded stakes), and the 2-year-old champ has now run increasingly faster races numbers-wise in back-to-back efforts since coming up short on conditioning in his first start off an extended vacation in March. Another subtle eye-opener is trainer Chad Brown's willingness to race Good Magic right back in two weeks, which is not usually something that the conservative conditioner does with his A-level stock. Good Magic did lose some momentum at the entrance to the far turn in the Derby when jockey Jose Ortiz had to back off a beat or two while waiting for an outside opening to materialize. And while that hesitation alone did not cost him the race, a similar traffic jam is unlikely to occur in the shorter-field Preakness, perhaps setting up a scintillating showdown between Justify and Good Magic that can be decided on more level terms, trip-wise.

Calumet Farm and D. Wayne Lukas are an owner/trainer tandem that doesn't shy away from the entry box in top-level races, and the connections of Bravazo were the first to declare they'd be back in Baltimore to take another crack at Justify. Bravazo ran a sneaky-good race in the Derby, handling the slop better than most while getting boxed and shuffled back early, floated five wide on both turns, and finishing with determination even when it was obvious he wouldn't hit the board. Bravazo will get a new jockey (Luis Saez) for the Preakness, and his foundation of eight straight races at a mile or longer gives him no excuses from a stamina standpoint. Calumet and Lukas teamed to win the 2013 Preakness with 15-1 Oxbow, and there are similarities to Bravazo: Both are by Awesome Again out of Cee's Tizzy mares, and each finished sixth in the Derby at long odds.

Sporting Chance's antics are beginning to eclipse his on-track ability, but he perpetually seems just one solid race away from returning to his graded-stakes winning form from last summer. This $575,000 KEESEP Tiznow (Cee's Tizzy) colt nearly lost the GI Hopeful at Saratoga last September when he ducked out suddenly nearing the wire, and he subsequently did the same thing at Keeneland this spring when disqualified from third in the GII Blue Grass S. He next ran in the GIII Pat Day Mile on the Derby undercard, and in a relentless, pelting rain Sporting Chance slammed on the brakes badly five-eighths from home before rallying convincingly seven wide into the stretch to finish fourth behind a trio of double-digit long shots. And just last Sunday, Sporting Chance repeatedly refused to break off for a workout at Churchill Downs, which only adds to his unpredictability on race day. On paper, a case could be made for upset potential in the Preakness: Sporting Chance has never run worse than fifth, has never been beaten more than eight lengths, and he has won over a wet track in case rain is an issue.

Tenfold was ambitiously plunged into the deep end of the Derby prep pool when attempting the GI Arkansas Derby off a 2-for-2 career start, so you have to judge his fifth-place finish in that context. Race winner Magnum Moon (Malibu Moon) got away with soft splits and was motoring home all alone, but the “race within a race” battle was intriguing in its own right, and this Curlin colt was beaten only two necks and a head for second money. Tenfold is bred to run long (out of a Tapit mare), and his connections waited to debut him until Feb. 9 at 1 1/16 miles. His sire won the 2007 Preakness, and Tenfold could be a wild card in the wagering on Saturday if you're willing to take a flyer on a lightly raced prospect from a high-percentage outfit.

A fresher Quip is back in the Classics mix after qualifying for the Derby but passing on that race after he reportedly lost weight and a bit of spark following his second-place run in the Arkansas Derby. But now, in the days prior to the Preakness, this 'TDN Rising Star' has been training well and chowing down “right through his feed tub” according to trainer Rodolphe Brisset. In that Oaklawn prep, this Distorted Humor (Forty Niner) colt stayed on well enough to prevail in a four-horse photo for second after attending the moderate pace set by four-length winner Magnum Moon. A winner now in three of his five lifetime tries and generally considered a tempo-pressing presence, Quip's rail draw for the Preakness doesn't necessarily mean he has to gun for the lead. But he'll have to be pretty quick into stride to secure a ground-saving stalking spot with the likes of heavy favorite Justify and the pesky Diamond King (Quality Road) to his outside both likely forcing the issue straight from the starting stalls.

Although most everybody's eyes were on the action up front, a key turning point farther back in the field in this year's Derby occurred about three-eighths out when a cluster of stalkers and closers moved en masse and several early-race speedsters stalled at the rail. Several mid-pack horses who had been capably saving ground abruptly got shuffled back and lost momentum, and Lone Sailor arguably took the worst of it. In that respect, finishing only 9 ¼ lengths behind Justify rates as a better-than-it-looks type of try, and this $120,000 KEESEP Majestic Warrior (A.P. Indy) colt will fire back in the Preakness with a jockey switch to Irad Ortiz, Jr. It's an open question whether Classic distances are this colt's sweet spot, though: His sire never won beyond seven furlongs, and his dam's sire, Mr. Greeley, never won beyond a one-turn mile.

Diamond King will attempt to become the first horse since Deputed Testamony [spelling OK] in 1983 to pull off the difficult Federico Tesio S.-Preakness double. But since the Tesio has been moved from Pimlico to Laurel, it no longer carries the win-over-the-track advantage that it once did as a prep (but it does reward the winner with automatic entry into the Preakness). This $235,000 EASMAY Quality Road (Elusive Quality) colt has racked up four wins from six lifetime starts, and his only two defeats came when he clipped heels and lost his rider in November's GII Kentucky Jockey Club S. at Churchill and when he ran a decent third behind legit sophomore sprinters in the GIII Swale S. at Gulfstream back in March. Diamond King is most effective sitting a length or two off the lead in the early stages of his races, but he is going to have to figure out a way to avoid being a sacrificial speed setup horse in the Preakness with the intimidating Justify breaking two gates to his outside and the adept Quip a likely pace presence from the rail. Javier Castellano picks up the mount for the first time, which is a plus considering he's won that race twice, including last year on 13-1 Cloud Computing (Maclean's Music).