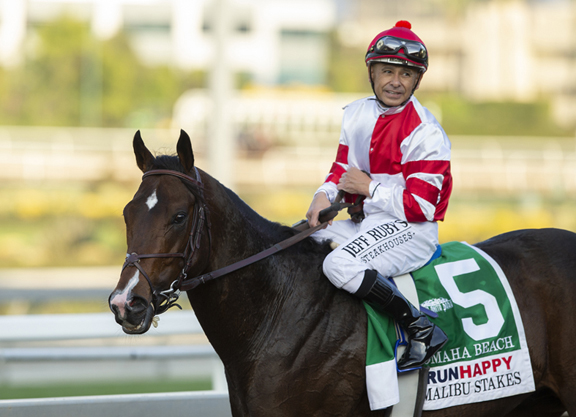 If a horse is standing at a major farm in Kentucky you can be assured that he was a quality racehorse. That’s Omaha Beach (War Front–Charming, by Seeking the Gold). He earned $1.6 million, won three Grade I races and would have been the favorite in the GI Kentucky Derby if not for a minor issue that led to his being scratched.

But what separates Omaha Beach, who is entering stud this year at Spendthrift Farm, from so many others is his versatility. During his 2019 campaign, he won at distances as short as six furlongs and as long as a mile-and-an-eighth. He was also competitive in grass races and, considering that he is a son of War Front, would have likely excelled on that surface if trainer Richard Mandella and owner Rick Porter decided to take that route.

“Omaha Beach’s versatility as a race horse is really something we haven’t seen very much of in recent years,” said Spendthrift General manager Ned Toffey. “To win sprinting, and to win stretching out to a mile and an eighth, just speaks to this horse’s inherent ability. That’s one of the things that you really want to see with a stallion. It doesn’t matter what they asked him to do, when they lined up, he was able to do it.”

As Toffey looks back on Omaha Beach’s racing career, it is a sprint race that he will remember most. He appeared in the Oct. 5 GI Santa Anita Sprint Championship off a layoff of nearly six months and faced the razor sharp sprinter Shancelot (Shanghai Bobby). Running at a distance that many thought at the time was not his best and coming off a long freshening, Omaha Beach wasn’t even the favorite that day. Shancelot was. Mike Smith made sure that Omaha Beach was never far back and the horse responded with a game effort to win by a head.

“For me, the Santa Anita Sprint Championship really stands out because we already knew that he was a router,” Toffey said. “He could run a mile-and-an-eighth, and we were pretty confident that he would handle a-mile-and-a-quarter. But to see him roll back and out sprint one of the best sprinters in the country really stamped him as something special.”

After a second-place finish in the GI Breeders’ Cup Dirt Mile, Omaha Beach won the GI Malibu at seven furlongs. He was slated to end his career in the GI Pegasus World Cup Invitational, but Mandella and Porter decided not to take any chances when x-rays revealed a problem in his right hind fetlock.

That Omaha Beach is a son of War Front is a definite asset. Toffey said the female family is also noteworthy.

“Omaha Beach is a son of War Front, one of the most prolific sires of recent years. That’s a huge bonus,” Toffey said. “The female family just couldn’t be any better. You have the combination of a little bit of a slant of turf with War Front, but very much a classic dirt female family. His dam, Charming, is by Seeking the Gold out of Take Charge Lady. This is about as good as pedigrees get.”

Upon his arrival at Spendthrift, Toffey was immediately impressed with the colt’s demeanor and his intelligence.

“Omaha Beach has settled in beautifully,” he said. “This is a really, really intelligent horse. This is something that we’d heard all year long from Richard Mandela. The horse just couldn’t have done any better. We got him off the van and he went right into a stall and immediately relaxed. We showed him to breeders and to the press the next morning and he stood up like a pro. I don’t think we’ve ever had a horse settle in this well.”

Because of the issues that led to the horse being scratched in the Pegasus, Spendthrift has been monitoring him closely. There haven’t been any problems.

“He’s on course to start breeding February 15th , which is historically the start of breeding season,” Toffey said. “All the reports have been very good. We’re just trying to be as careful as we can with him. There’s been no swelling and very little, if any, lameness at all. He’s going out in a pen and being hand-walked. We’re going to do that for a little bit longer. When the weather clears, we’re going to start to get him out in the paddock. If we see no setback at that point, after about a week of doing that, we’ll begin to start the process of test breeding, and try to move forward from there. And as long as there are no setbacks, and I don’t foresee any, we should be in good shape to start on schedule.”

Omaha Beach’s stud fee is $45,000. He is part of an impressive lineup of new stallions Spendthrift has attracted for this breeding season, a list that also includes Mitole (Eskendereya) and Vino Rosso (Curlin).