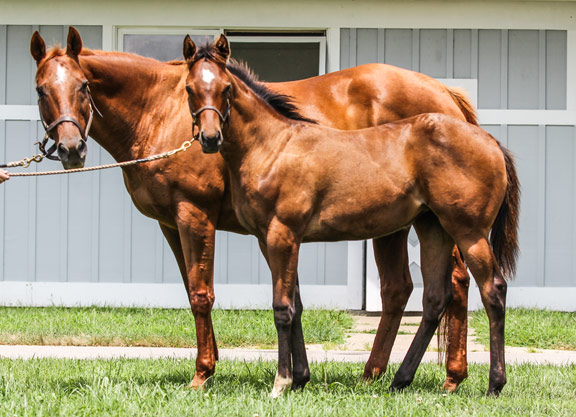 LEXINGTON, K.Y.-Stonestreet Stables has produced and campaigned some of the industry’s best and brightest from Rachel Alexandra and Curlin to Lady Aurelia and Good Magic. Barbara Banke’s operation is known for its illustrious broodmare band, who are responsible for their homebred luminaries, as well as some of their prestigious victories. We recently visited the nursery to meet some of Stonestreet’s blue hens and their newest additions.

The first stop on our tour was a visit with D’Wildcat Speed (Forest Wildcat), who was purchased by Banke for $1 million at the 2005 Keeneland November Sale. A Grade II winner in the U.S. and a MSW champion in Puerto Rico, the chestnut produced globetrotting sensation Lady Aurelia (Scat Daddy), victress of the G1 Darley Prix Morny in 2016 and a two-time Royal Ascot winner, capturing the 2016 G2 Queen Mary S. and 2017 G1 King’s Stand S.

The 19-year-old mare is also responsible for the 2-year-old filly Lady Pauline (Munnings), who earned ‘TDN Rising Star’ status for her debut win at Keeneland Apr. 5. D’Wildcat Speed was given a year off after producing that May 5 foal and had a Medaglia d’Oro filly Feb. 13 of this year. The Puerto Rican Horse of the Year was bred back to Justify this spring.

“She’s a very laid back, loving mother, who takes very good care of her babies,” said Jennifer DeLaittre, Stonestreet’s assistant broodmare manager. “Her babies have a tendency to look a lot like her. They got a huge shoulder and great big rump to them.”

She continued, “[The 2019 filly] very much knows herself. She won’t put up with a lot of nonsense. If she wants to be groomed, she’ll be groomed. But when she’s had enough, she’ll let you know. Sometimes she will make it a little bit hard for the guys to catch, just because she wants to go in when she decides to go in.”

Next on the list was Cavorting (Bernardini), a $360,000 KEENOV weanling purchase, who showed her spunk and fire right from the start.

“She’s quite night and day in her transition,” said DeLaittre. “When she was first bought as a weanling here, we were loading her up at the sales ground, and she somehow gracefully jumped out of the back of the van, and managed to take that talent to the farm, and jumped out of a paddock, which transitioned well to the racetrack.”

Tabbed a ‘TDN Rising Star’ on debut at Saratoga in 2014, Cavorting followed up on that initial promise with a win in that venue’s GII Adirondack S. next out. Victorious in the GI Test S. and GII Prioress S. in her return to the Spa the following year, the Kiaran McLaughlin pupil closed out her exceptional career with a trio of wins in the 2016 GII Ruffian S., GI Ogden Phipps S. and GI Personal Ensign S.

Sometimes mares as talented as Cavorting on the racetrack have a hard time settling into farm life, but watching the bay graze peacefully beside her latest foal, it is clear she has transitioned well.

“That fiery spirit that she had did well for her [on the track],” DeLaittre said. “She’s a Grade I winner, but since she’s come to the farm, she’s settled down into motherhood quite well, has relaxed a bit. But on a good day, you can see that fire in her eye where she wanted to run and she wanted to do things her own way, and she could, every now and then, be like that. But, in general, she’s transitioned well into a calmer mare.”

Cavorting produced her first foal last term, a filly by Curlin, and had a Medaglia d’Oro filly Mar. 13 of this year. The 7-year-old mare was bred back to Curlin this spring.

“She loves her foals very much,” DeLaittre said. “She’s a mom who’s only had a few foals, so she’s still very attached to them and that kind of behavior eventually kind of dies down and they’re a little bit more relaxed and calm, the more foals they have, but right now, she’s much more about her foals than maybe an older mare is, a little bit more protective, but she’s still a very good mother.”

DeLaittre continued, “So this year Cavorting has a Medaglia d’Oro filly. She looks a lot like her mother, a little bit stretchier. The first foal that she had was a Curlin filly and she was a little bit more compact than the filly that we have this year. But both of them have a bit of their mother’s temperament. They know themselves and aren’t too terribly shy to show it from time to time. But, in general, they are easy to work with.”

After our visit with Cavorting, we went to see Glinda the Good (Hard Spun), a Stonestreet homebred who carried the farm’s burgundy and gold colors to a pair of stakes wins and a graded placing. The 10-year-old mare is best known, however, for producing champion Good Magic (Curlin). The chestnut colt was purchased by Bob Edwards’ e Five Racing for $1 million at Keeneland September and Stonestreet stayed in as their partner. Runner-up in the 2017 GI Champagne S., Good Magic broke his maiden in the GI Breeders’ Cup Juvenile to secure the Eclipse Award. Victor of the 2018 GII Toyota Blue Grass S., he finished second to eventual Triple Crown hero Justify (Scat Daddy) in the GI Kentucky Derby and won the GI Haskell Invitational S. last summer. Good Magic has since joined his sire at Hill ‘n’ Dale.

Glinda the Good’s now-3-year-old colt Best Magic (Speightstown) was purchased by Japan’s Katsumi Yoshida for $700,000 at last year’s OBS April Sale. She has an unnamed juvenile filly by Super Saver and a yearling fill by Pioneerof the Nile. The bay produced a full-brother to Good Magic Apr. 12 of this year.

“Glinda the Good has a full-brother to Good Magic this year, a colt by Curlin,” DeLaittre said. “He looks a lot like him, chestnut with a blaze. He has the most chill attitude that you’ve probably ever met on a foal. He will come up to you and want all the attention and won’t run away from you. He is just very personable. It’s a horse that I would put in front of anybody, even if they didn’t have horse experience. You could just put them up there and know that they’re not going to get hurt by that foal because he’s all about getting attention and getting a nice rub on the neck.”

Last, but not least, we visited with Stonestreet-bred and raised Dreaming of Julia (A.P. Indy). A daughter of MGISW Dream Rush (Wild Rush), the bay is a half to MGSW Dream Pauline (Tapit) and stakes-winning Hill ‘n’ Dale sire Atreides (Medaglia d’Oro). Dreaming of Julia opened her account with a trio of victories, including the 2012 GI Frizette S. and was third in that year’s GI Breeders’ Cup Juvenile Fillies. She captured the GII Gulfstream Park Oaks in 2013 and was second in Belmont’s GI Mother Goose S. later that term.

Dreaming of Julia produced her first foal, a Ghostzapper colt in 2016. The 9-year-old mare had the filly Golden Julia (Medaglia d’Oro) in 2017 and foaled a Curlin filly last year.

“She adapted really well [to farm life],” DeLaittre said. “She didn’t miss a beat at all from being that grade-one race mare to a grade-one producing, eventually, broodmare. She’s very easygoing when it comes to foals. It’s easy to work around her and I haven’t had very many issues with her at all.”

Dreaming of Julia’s latest foal is a Medaglia d’Oro colt born Mar. 9 of this year and she was bred back to Curlin.

When asked how he compares to his dam, DeLaittre said, “He’s a lot more relaxed than she is. Not to say that she is a mare that’s more on the muscle, but you can do basically anything you want with him and he doesn’t care. He is a very typical Medaglia d’Oro, which will do well on the racetrack.”