Taylor Touches Down In Deauville 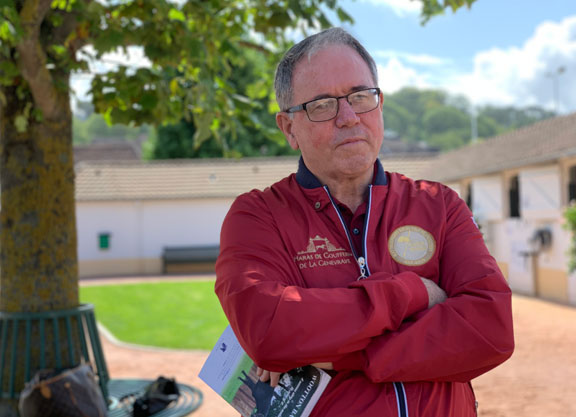 Taylor Made’s Duncan Taylor arrived in Deauville on Wednesday ahead of the debut yearling consignment of Gouffern Taylor Made Sales at Arqana August this weekend, where they will offer four colts by Giant’s Causeway, Gutaifan (Ire), The Gurkha (Ire) and Iffraaj (GB). TDN Publisher Sue Finley caught up with him on Thursday.

SF: What has your experience in Deauville been like thus far?

SF: Other than the mass and the restaurants, what have you enjoyed about the town?

DT: I came last year too, and you wake up in the morning and you see the beach and the horses going along the beach. That’s a beautiful thing to wake up to and you couldn’t ask for anything more. The weather, everybody says it’s cold, but it’s about 63 degrees today and sunny, which is the perfect day for me.

SF: What are some of the differences between selling horses in France vs. America?

DT: There was a yearling we were looking at this morning and they were saying, ‘That’s a really big yearling,’ and I was thinking, at Keeneland that’d be an average-size yearling, because I think we breed more for leg and height. Over here, the horses are lower to the ground but they’re very good movers. I was surprised because I always had a picture of Galileo, for instance, in my mind and thinking that they were slighter horses. Some of the grandsons of Galileo that I’ve seen in the yard, it seems like they have a lot of muscle and they’re really sturdy built horses.

SF: Three of the horses in your consignment are pinhooks bought at the European foal sales. What sort of horse do you think would do well being pinhooked here?

DT: I think a Speightstown that was a good walker with his kind of build; I think Kitten’s Joy would have been awesome this year. I really tried to get a Kitten’s Joy over here and just couldn’t get anybody to do it. With Roaring Lion being Horse of the Year and Kitten’s Joy being such an awesome grass sire, you would think one of those would fit well over here. So I think a horse with a big walk with some kind of European breeding.

Next year we’re thinking about maybe pinhooking a few more and involving clients that would like to come over and experience Deauville. They could have a part of a horse and come over here. They wouldn’t have too much invested, but they could have a good time, experience France and [Jean-Pierre de Gaste of Gouffern] is a great host. He knows all the aristocracy and nice castles and every place to take you. So it’d be a great experience along with being able to experience the races and selling a horse over here. So that was some of the thinking when we started Gouffern Taylor Made Sales.

SF: There are plenty of American-sired yearlings in the sale; stallions like American Pharoah, Flintshire, Hard Spun, Karakontie, Tonalist and Violence. Have you seen any of them?

DT: I haven’t actually looked at any of them on the grounds yet. Something I noticed in the [Arqana May Breeze-Up Sale], too, was that there was a Palace Malice [sold for €180,000] and a couple of American sires that I didn’t think would necessarily be the exact horse for Europe. American-sired horses are very well received in the breeze-up sale. It’s an international market. I think it helps if you have the right breeding, but if you have the horse they like, people throw the pedigree out the window and say, ‘that’s an athlete. I want that one.’