Tattersalls October Has Blue Point Half 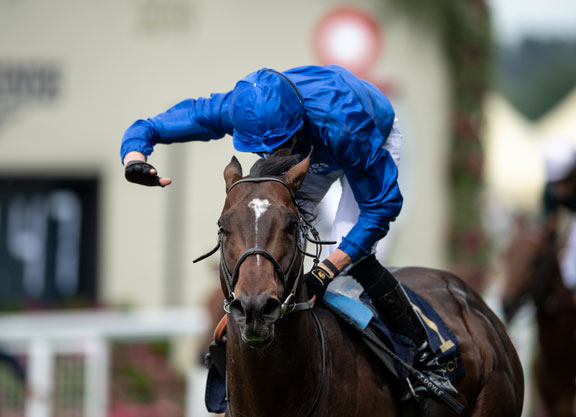 A total of 552 lots comprise the catalogue of Book 1 of the Tattersalls October Yearling Sale slated for Oct. 8-10, among them an Invincible Spirit (Ire) half-sister (lot 11) to Royal Ascot MG1SW standout Blue Point (Ire) (Shamardal) for Oak Lodge & Springfield House Studs. Star sires Dubawi (Ire) has 29 yearlings offered, while Galileo (Ire) has 23, the latter’s son Frankel (GB) has 40 and 41 will go under the hammer by Frankel’s barnmate Kingman (GB). Sea The Stars (Ire) (31), Shamardal (8) and Dark Angel (Ire) (30) are also represented. Fifty-nine yearlings are either half- or full siblings to Classic or Group 1 winners and 243 are half- or full-siblings to group/listed scorers. Twenty-one Classic or Group 1-winning mares have yearlings catalogued. All of the yearlings are eligible for the £25,000 Tattersalls October Book 1 Bonus scheme.

Several noteworthy American sires have yearlings catalogued, and the very first lot in the ring is a son of Triple Crown hero American Pharoah who is a half-brother to star American grass mare Lady Eli (Divine Park) (lot 1) from the 21-strong draft of Watership Down Stud. That consignor sold last year’s sale topper, a son of Dubawi (Ire) out of Dar Re Mi (GB) (Singspiel {Ire}) for 3.5 million gns. Also from Watership Down is a Kitten’s Joy filly (lot 82) from the same family as G1SW Passage of Time (GB) (Dansili {GB}) and a half-sister (lot 495) to G1 Oaks victress Qualify (Ire) (Fastnet Rock {Aus}) by War Front.

“Graduates of Book 1 of the October Yearling Sale have enjoyed another stellar year with the likes of this year’s dual Royal Ascot Group 1 winner Blue Point and outstanding Classic and Group 1 winners Japan (GB) (Galileo {Ire}) and Phoenix of Spain (Ire) (Lope de Vega {Ire}) flying the flag throughout Europe,” said Tattersalls Chairman Edmond Mahony. “The achievements of Book 1 purchases at the highest level in America have further demonstrated the uniquely global appeal of Europe’s premier yearling sale and this year’s catalogue is yet another in a long sequence of truly exceptional Book 1 catalogues. We have an extraordinary number of yearlings by the very best of an outstanding cast of European sires and, crucially for buyers at every level of Book 1, all 552 Book 1 yearlings can reward owners with the unprecedented prize money offered through the £25,000 Tattersalls October Book 1 Bonus scheme.”