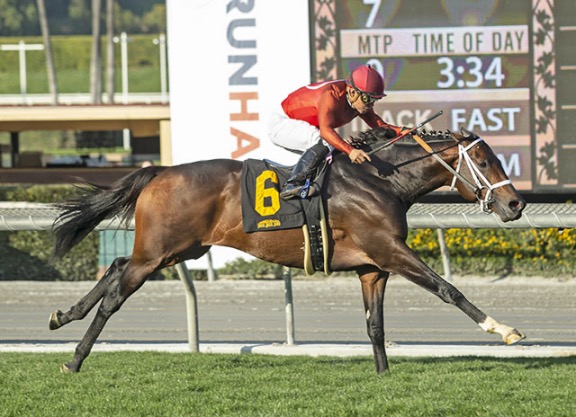 River Boyne has returned to his birthplace | Tara Stud

On part of its 70-mile journey across Ireland, the River Boyne flows not far from Tara Stud in County Meath, but the stallion named in its honour has taken a far more meandering course simply to return to source.

Approaching his sixth birthday, River Boyne (Ire) (Dandy Man {Ire}) is back home from America and about to embark on a stallion career five years after he was sold by his breeder Derek Iceton at the Goffs November Foal Sale. On Sunday, his full-brother will pass through the same sale ring, and potential buyers would do well to reflect on the career of his elder sibling, described by Iceton as a “hard-knocking horse”.

While River Boyne had the speed and precocity so beloved of the commercial market, he also had the durability which should be high on the list of pre-requisites for a new stallion. In this regard, his racing career was markedly similar to that of his perennially popular sire Dandy Man, who retired to Ballyhane Stud at the age of seven with 30 races under his belt.

It is perhaps no surprise to see the name of Ballyhane's Joe Foley in the sales returns as the pinhooker of River Boyne—a €20,000 foal who became a €65,000 Goffs Sportsman's yearling and had his first three starts at two in Ireland for Gordon Elliott. But it was following his reappearance in the ring at the Tattersalls Horses-in-Training Sale that his career really started to flow.

Bought by Red Baron's Barn and Rancho Temescal, River Boyne moved to the Californian stable of Jeff Mullins and won his first two starts at Santa Anita, including the listed Pasadena S., followed later in his 3-year-old season by victory in the GIII La Jolla H. From that day on, he never finished out of the first four, winning two Grade II contests as a 4-year-old before earning his Grade 1 laurels with victory in the  Frank E Kilroe Mile in March this year.

“I followed him through all of his racing career,” recalls Iceton, who has recently welcomed River Boyne home to Tara Stud. “He is a really noble, proper, hard-knocking horse. Tough, sound and consistent throughout his whole career. So that's the sort of horse I wanted for my customers here.”

He added, “What they're looking for is a sprinter/miler type, who is correct. And I often say that the cheaper the horse is, the more correct the individual has to be. Dandy Man has served Irish breeders incredibly well over the last number of years. And this is the first son of Dandy Man to come to stud. So I'm delighted he's back. Obviously, I'm delighted we bred him. I think he's exactly what the market wants and we stood him at a very competitive price to try and keep my customers happy.”

River Boyne enters stud at €5,000, standing alongside Tara's two sons of Dark Angel (Ire), Alhebayeb (Ire) and Estidhkaar (Ire). Despite the obvious sentimental lure of standing a stallion he bred, Iceton insists River Boyne had to pass other tests first.

He says, “You know, the first question you ask yourself when you bring a colt to stud is, would I use that horse myself? And, if you have to think more than two nanoseconds about it, you shouldn't be standing him. So, whether I bred him or not, he was always a horse I was going to go for. I was very fortunate, I had a lovely line of communication with his owners in California, who have been incredibly kind to us during his racing career. And then when he was being retired I got in very quickly  and got on board. So I'm going to stand the horse on his own merits. We breed plenty of good horses around here. He's been an exceptional one in the last couple of years but he wouldn't be here [other than for the fact that] he's the right horse for the job.”

Iceton continues, “The people who are buying the foals and the yearlings are looking for those foals that have a walk and fill the eye. [River Boyne] has got the walk. There's no reason why his progeny won't have a walk. So, it's important, again, if somebody comes to look at a stallion here, they can make up their mind within about three steps of him walking out the door. Is this horse for me or not? Does he fill your eye? Does he have that little bit of zing about him that you'd like to use? You know, if you have to look at him a couple of walks up and down, I think the answer then will be a 'no'.”

As well as that “little bit of zing”, there's no doubt that sire power counts for an awful lot when launching a new stallion and, in this regard, River Boyne can rely on some reflected glory from the exploits of Ballyhane Stud's flagship horse.

“Dandy Man is a hell of a sire,” Iceton says. “And, I suppose one other thing about Dandy Mans, they're very good looking, colts and fillies, but they've done particularly well in Hong Kong. So a lot of those good colts were getting bought to go to Hong Kong, and of course they have been gelded, so there is no coming back from that. It just goes to show how sound and tough they are. Because, unless they x-ray properly, unless they were sound enough through and through, they wouldn't be there. Look at any decent card in Hong Kong and just look at the number of Dandy Man's [offspring] that are running there at the highest level. So I was lucky this fellow went west rather than east.”

River Boyne's brother goes through Goffs on Sunday as lot 602, one of three foals being brought to the sale by Tara Stud.

“He's a grand foal. He really is a little carbon copy. When people see what the foal is like, and see what daddy is like, it's probably a relatively unique marketing ploy,” says Iceton.

Reflecting on River Boyne's younger days, he adds, “As a foal, he always had that great walk. He always had a great attitude. And, to be quite honest, I hadn't seen him from the time he went from Europe to America and came back here. And, with a certain degree of trepidation when the truck arrived in, I thought, God, I hope I'm going to like this horse. I hope he's everything he was. So once he got off the truck, he was absolutely clean-limbed, he still has the walk, he still has a great attitude, which actually comes from his mother. His mother's just a lovely, lovely mare.”

Their dam Clytha (GB) (Mark Of Esteem {Ire}) was bred at Usk Valley Stud by Kevin Mercer and, though she was winless in her five starts, she has proved to be far more adept in her second career. River Boyne is clearly the best of her five winners to date, but she has also produced the six-time winner Harome (Ire) (Bahamian Bounty {GB}), who earned a top rating of 93, as well as the 79-rated Brosnan (Ire) (Champs Elysees {GB}) and dual winners Incendiary (Ire) (Excellent Art {GB}) and Keukenhof (Ire) (Dutch Art {GB}). The mare's yearling filly by Divine Prophet (Aus) has been retained by Iceton and is going into training with Eddie Lynam, while the 10-year-old Xerxes (Ire), by former Tara resident Key Of Luck, is alongside her mother back at the farm. Clytha is not in foal at present but will return to Dandy Man in 2021.

In the meantime, Iceton has the job of assembling the key first book for River Boyne, and he says that early signs are encouraging.

“I'm just back from Newmarket and I was amazed in particular at the number of English farms, and very significant English farms, that spoke to me about him,” he states. “I actually was sorry that I hadn't brought him over and put him on show in Newmarket. Anybody that's come into the yard loves him. He's certainly not going to be a difficult prospect to fill. I'm syndicating him to breeders, and breeders only, which I think is a very important thing to do. So I'm selling shares, not breeding rights because, again, I think it's important that whoever buys into a stallion buys equity rather than a breeding right. I have a good customer base and I'm hoping I can attract plenty of those back again. Of the stallions that have stood here previously, I think everybody [who bought shares] has made money. Some of them have made very significant money out of the stallions I stood. On balance, if you sell equity to somebody and they've more than one mare, they are going to send the better mare to the horse that they have equity in, I presume.”

For Flat breeders, there is one final sale to come in a year which has presented plenty of challenges for the world at large, and of course for the racing and breeding industry. The Goffs November Sale is traditionally the first to offer foals in Europe; this time it will be the last after its rescheduling to this week to coincide with the easing of restrictions in Ireland. Like most in the industry, Iceton expresses relief that the business of buying and selling horses has been able to proceed, albeit in a somewhat different style to usual.

“It's been a very difficult year,” he says. “I am delighted that we've managed to get through the yearling sales as well as we have. So I'm very grateful to two lots of people here. First of all, the sales companies are to be thanked and congratulated for all they've done. All the changes in terms of sales dates, the expenses that they all had to go to to put the sales on for us in the first place.

“The other people that I really want to thank are my own staff. I have some guys here that have been to England four or five times at this stage. They only go and they come back, they get their Covid test, they do the 14 days and then they're back in England again. And they've done that without a whimper.”

Iceton adds, “It just goes to show how resilient a business we are in, whereas most entertainment businesses are really struggling. The people who own horses and have them in training couldn't go to see them run for the last year and yet, maybe at a slightly lower level, but not a significantly lower level, the business took place, horses got sold and, please God, we will have a better 2021.”