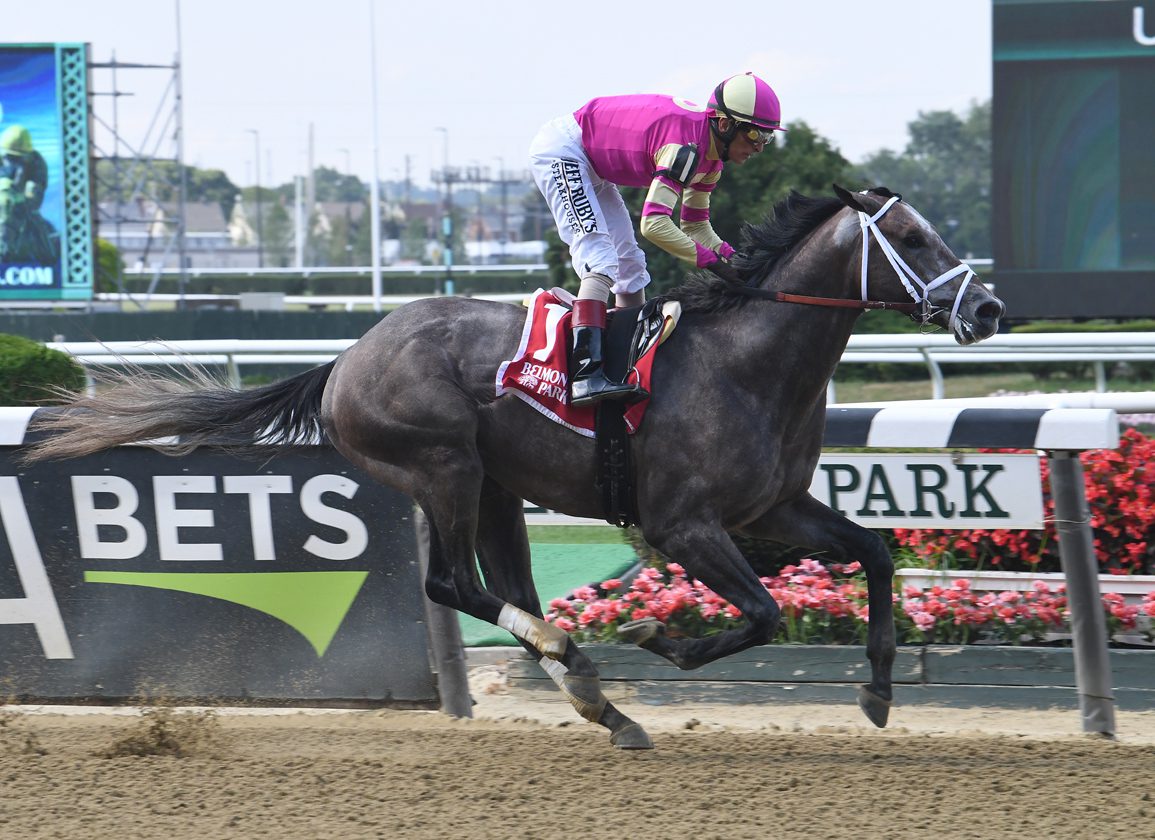 The lightly raced 'TDN Rising Star' Charge It (Tapit), a forgettable 17th with a nightmare trip in the GI Kentucky Derby, put it all together with a jaw-dropping victory in Saturday's GIII Dwyer S. at Belmont Park.

The rail-drawn 3-5 favorite–a green second while making his stakes debut at third asking in the GI Curlin Florida Derby Apr. 2– pressed Fluid Situation (Warrior's Reward) from second while racing in tight quarters along the fence here.

Hall of Famer Johnny Velazquez bulled his way into the clear after brushing with the tiring maiden winner and second choice Nabokov (Uncle Mo) at the five-eighths pole and the gray put on an absolute show from there. Charge It cruised to the front a quarter of a mile from home and was kept to task down the stretch to win by a devastating 23 lengths. Longshot Runninsonofagun (Gun Runner) was second; Fluid Situation was third.

“We always had a lot of confidence in this horse's ability,” winning trainer Todd Pletcher said. “We tried to correct the problem from the Derby [displaced palate], which we think we successfully did. Today, we saw the talent level that we'd been seeing from him.

Pletcher continued, “We drew the one-hole again [Life Is Good also had post one earlier on the card] and needed to come away and establish some position. We felt like that's where we would be and he would work his way into the clear, and it was pretty much game over from there.”

On potential next starts at Saratoga in the GII Jim Dandy S. July 30 and/or the GI Runhappy Travers S. Aug. 27, Pletcher added, “We were hoping for a good performance today that would put us in the position to look at the Jim Dandy or the Travers or both. It was a powerful effort today, so we're back on track to where we thought we were at Florida Derby time. It's all about him telling us what to do. Could we train up to the Travers from here? I don't think that's impossible either.”

Charge It was produced by the winning mare I'll Take Charge, a $2.2-million KEESEP yearling purchase by Mandy Pope's operation. The 10-year-old is a daughter of bluehen mare Take Charge Lady (Dehere), who is responsible for champion Will Take Charge (Unbridled's Song), GISW Take Charge Indy (A.P. Indy), MGSW & GISP As Time Goes By (American Pharoah); and Charming (Seeking the Gold), the dam of champion Take Charge Brandi (Giant's Causeway) and MGISW Omaha Beach (War Front). I'll Take Charge produced a colt by Into Mischief this year and was bred back to Tapit.