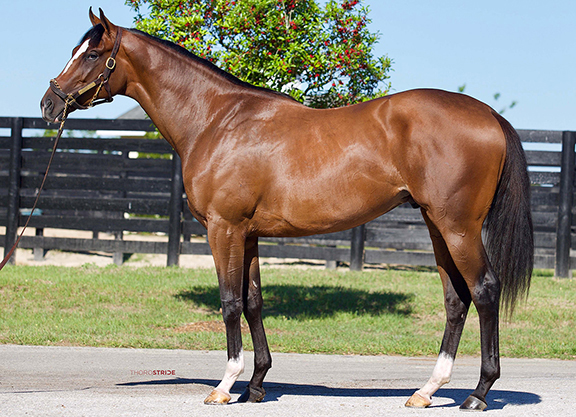 Donna Wormser, a longtime presence on the sales scene, is mostly retired from the sport these days, but the horsewoman will be represented at next week’s Fasig-Tipton Midlantic 2-Year-Olds in Training Sale by a pinhooking prospect with a half-sibling in the news. Wormser partnered to buy the colt by Tapit out of Visions of Clarity (Ire) (Sadler’s Wells) for $130,000 at last year’s Fasig-Tipton Kentucky October Yearling Sale. At the time, the yearling’s juvenile half-brother by War Front had finished second in the GI Summer S. and fourth in the GIII Bourbon S., but War of Will would go on to establish himself as a bonafide GI Kentucky Derby contender with wins in the GIII Lecomte S. and GII Risen Star S. After a dramatic, and well-documented, seventh-place finish in the Derby, War of Will will look to get back to the winner’s circle in Saturday’s GI Preakness S. Three days later, his half-brother will go through the sales ring in Timonium as hip 575 with the Wavertree Stables consignment.

“I generally only pinhook at a limited level anymore,” Wormser, who last consigned horses under her own name some 15 years ago and is now based in North Carolina, said. “It is my only involvement in the Thoroughbred industry these days.”

Of her involvement with the Tapit colt, Wormser added, “There was a pinhooking group formed and this horse was recommended to me. He was one of three 2-year-olds I am a part of selling this spring.”

War of Will was purchased by Justin Casse on behalf of Gary Barber for €250,000 at last year’s Arqana May sale and is now trained by Casse’s brother Mark. The family connection gave Wormser some inside information on the colt’s potential.

“I knew of his existence and that he was well thought of by Mark Casse,” Wormser said. “My godson is Justin Casse, so he was able to give me some insight, but at that point he was still only thought of as a ‘grass horse.'”

Bred by Flaxman Holdings, the Tapit colt is also a half-brother to Group 1-winning Pathfork (Distorted Humor). Visions of Clarity is a half-sister to multiple Group 1 winner Spinning World (Nureyev).

With the power-packed pedigree was Wormser surprised to be able to purchase the youngster for $130,000 last October?

“I was,” she admitted, before explaining, “The parts were all there, but he was a May foal with a lot of maturing in front of him, which is why he is selling this late. There is a fair amount of Sadler’s Wells to him, but he has a very nice top line and is correct. He has really blossomed over the past 45 days.”

Ciaran Dunne, whose Wavertree consigns the colt to the Midlantic sale, agreed the May 13 foal (Thorostride video) is showing all the right signs.

“He was very immature and backward as a yearling and is only now starting to mature, both mentally and physically,” Dunne said. “He is a colt who gives you the impression that he is only going to get better. Obviously being a brother to a horse like War of Will is a huge bonus and makes him a very exciting prospect.”

While War of Will’s exploits have him in the news, Wormser thinks it’s a pedigree that stands out all on its own.

“Obviously it was very nice to see him run very well in the Derby and he has a great shot in the Preakness, but I believe the pedigree has already spoken for itself,” Wormser said. “Anything else is just icing on the cake really.”

The under-tack show for the Fasig-Tipton Midlantic sale begins Tuesday at the Maryland State Fairgrounds in Timonium. In the wake of heavy rain both Sunday and Monday, the show’s initial session has a delayed start time of 10 a.m. to allow for additional track maintenance. Wednesday and Thursday session of the show will begin as regularly scheduled at 8 a.m. The two-day auction will be held next Monday and Tuesday with bidding beginning each day at 11 a.m.