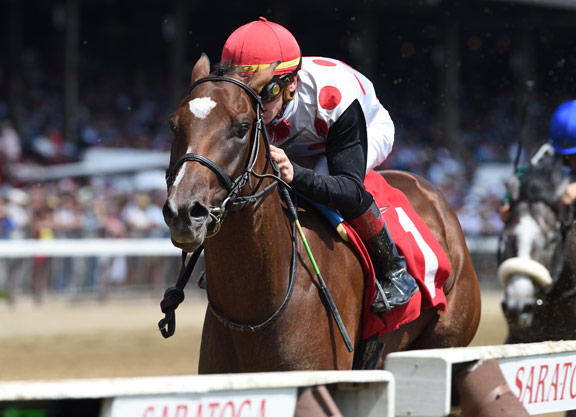 Tap It to Win | Coglianese

Recent allowance winner Tap It to Win (Tapit) is now under consideration for the GI Belmont S. June 20, according to trainer Mark Casse.

“I've always said, run them when they're good,” Casse said. “We won the [GI] Breeders' Cup [Filly and Mare Sprint] with Shamrock Rose (First Dude) [off of two week's rest] and last year we spun Got Stormy (Get Stormy) back off of a week's rest to beat colts in a Grade I [Fourstardave at Saratoga]. Sixteen days will be enough time.”

A second-out graduate in August, Tap It to Win was well beaten in both the GI Claiborne Breeders' Futurity S. and Street Sense S. last fall. The Live Oak homebred is a perfect two-for-two this season, capturing a Gulfstream allowance May 9 and winning at Belmont June 4.

“I thought that [Thursday] was a really tough race, but I believed we had a good chance,” Casse added. “[Hall of Fame jockey] Johnny [Velazquez] told me that he galloped out really well so that makes me feel good.”

Another Belmont contender who may be entering the Classic contest on a quick turn around is Sole Volante (Karakontie {Jpn}), who is entered in an allowance at Gulfstream Wednesday.

“He's doing good, unfortunately we missed a work with the bad weather, but there's a race for us next Wednesday in the book and he's going to run that,” trainer Patrick Biancone said. “We need to give him a prep race. Nothing replaces a race, so we'll run him there and hopefully he runs like we expect and then he'll be in a van the following Monday for Belmont.”