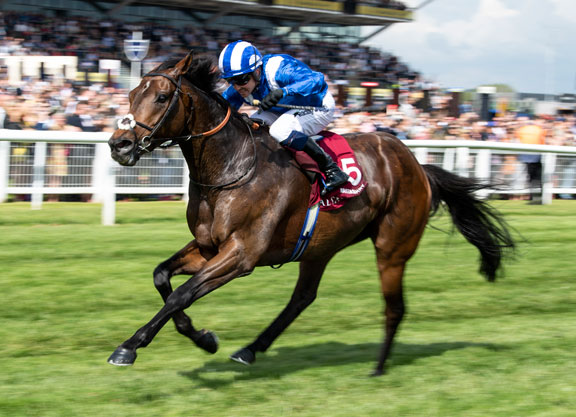 Sir Michael Stoute’s renowned prowess with older horses had already been championed on Newbury’s Saturday card by Crystal Ocean (GB) (Sea the Stars {Ire}) in the G3 Aston Park S., but the 6-year-old Mustashry (GB) (Tamayuz {GB}) readily trumped that by becoming the first of his age to win the G1 Al Shaqab Lockinge S. since 2006. Tightened by a comeback third in the nine-furlong G3 Earl of Sefton S. at Newmarket Apr. 18, Shadwell’s homebred was always happy tracking the pace in a perfect stalking position under cover. Ridden before the 5-1 joint-favourite Laurens (Fr) (Siyouni {Fr}) was dead ahead with over two furlongs remaining, the 9-1 shot nevertheless picked up better and swamped her a furlong from home before his staying power kicked in to make a decisive difference. At the line, last year’s G2 Park S. and G2 Joel S. winner had 2 1/2 lengths to spare over the filly, with the G1 Queen Anne S. hero Accidental Agent (GB) (Delegator {GB}) putting in an ideal warm-up for his return to Royal Ascot, a half length away in third. “This horse has improved every season and we thought he’d run a big race today,” jockey Jim Crowley said. “I got a nice tow into it from Laurens and he now feels like a proper horse, having won over seven, a mile and a mile and a quarter. He’s so consistent and very amenable in a race, is never keen and a pleasure to be around.”

Related to the stable’s dual G2 Hardwicke S.-winning stalwart Maraahel (Ire) (Alzao), Mustashry was reportedly plagued with splint issues as a youngster and stayed mainly in handicap company until winning York’s G3 Strensall S. over nearly nine furlongs in August 2017. A year later, he had been seen in public on just two subsequent occasions and ran second to Lord Glitters (Fr) (Whipper) in the same race before dropping to seven furlongs to win Doncaster’s Park S. and following up in Newmarket’s Joel over this trip. Audaciously taken to Churchill Downs for the GI Breeders’ Cup Mile, the dark bay was only four lengths away from stablemate Expert Eye (GB) (Acclamation {GB}) when denied an uninterrupted trip in 11th there and performed with credit when returning ring-rusty under a five-pound penalty in the Earl of Sefton.

This was the latest feather in the cap of Stoute, who was registering an eighth success in a race in which he already held the record and first won with Scottish Reel (Ire) 33 years before. “We knew he was in very good shape and we’ve never had him better than he is this spring,” he said. “I would think the [June 18] Queen Anne would be the right move, but he’s a versatile horse who has won over a mile and a quarter.”

Laurens is one of several in this line-up that will be re-opposing at Royal Ascot and trainer Karl Burke said of her, “I was delighted with her run, she lost her lead but then in the last 50 yards got her second wind and stayed on again, so I’m sure there’s some improvement in her. She will go for the Queen Anne next and it will be fillies’ only after that.” Eve Johnson Houghton said of Accidental Agent, “We’re thrilled. He’s come back to what we know he is and proven himself again. He lost a shoe and took a big blow one and a half out, so we’re looking forward to taking on the winner again in the Queen Anne.”

Mustashry’s half-brother Munaaser (GB) (New Approach {Ire}) was initially trained by Stoute and proved a smart handicapper at around this trip, finishing runner-up in the Silver Cambridgeshire H. at Newmarket before posting a second in the G3 Abu Dhabi Championship. The dam is a half-sister to the aforementioned Maraahel, who was placed on six occasions at this level including when losing out by pixels in the 2006 G1 Juddmonte International, and also the G3 Prestige S. third Huja (Ire) (Alzao). The third dam Mathaayl (Shadeed) is a half to the G3 Princess Margaret S. winner Muhbubh (Blushing Groom {Fr}) and a close relative of the Australian champion sire Twig Moss (Fr). Her descendants include the 2015 G2 Prix Robert Papin scorer Gutaifan (Ire) (Dark Angel {Ire}) and the G1 Premio Jockey Club winner and G1 St Leger runner-up Ventura Storm (Ire) (Zoffany {Ire}). Safwa also has an as-yet unraced 2-year-old filly by Shamardal named Rabaahbah (Ire).