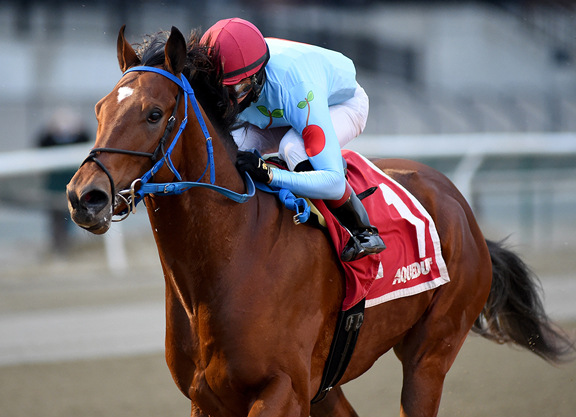 Two years ago at Keeneland January, a short yearling colt by Street Sense from Twirl Me, by Hard Spun, exchanged hands for $35,000. He'd been sold in-utero by Godolphin for $30,000 at Keeneland November in 2017 and was foaled the following year in Bakersfield, California, at Jason Tackitt's Rising Star Farm, the colt's official breeder. Tackitt said he'd been advised to jettison the colt in January because of a knee lucency (decreased bone density) and “bad hocks.” The colt was re-sold at Keeneland that September for $75,000 and then again for $26,000 the following May at the Fasig-Tipton Midlantic 2-year-old sale. Now named Capo Kane, he won the $150,000 Jerome S. on New Year's Day at Aqueduct by 6 1/4 lengths, his second win from three starts, and he's on the early Triple Crown trail in New York, which doesn't necessarily mean much at this writing. However, his pedigree is an excuse to shine a spotlight on the J. E. Widener branch of a family that's had a long-lasting and important impact on racing and breeding, particularly in this case through Widener's daughter-in-law Gertie Widener.

There isn't enough space here to do the Wideners justice and the scope of what follows is a narrow examination of parts of the tail-male and tail-female lines of Capo Kane, but the Wideners were influential on both sides of the Atlantic and were among those elite Americans from the early part of the last century that raced and bred horses in Europe as easily and as successfully as they had here. Europe had originally beckoned from necessity–many wealthy owners had transferred bloodstock to England and France as anti-gambling laws curbed the game here–but for some, like Gertie Widener, Europe became the preferred theater, and her successes, too many to recount here, probably played a role in paving the way for American ownership expansion into Europe in the 1960s and 1970s, which is another story altogether.

These are the key people in relation to the relevant horses in Capo Kane's background:

J. E. Widener: Joseph Early Widener, one of the wealthiest men in America in the first part of the 20th century after inheriting the sizeable fortune of his father, P. A. B. Widener; owned historic Elmendorf Farm in Lexington from 1920 to 1943 and bred and raced in Europe as well; died in 1943, not quite as wealthy as he'd originally been.

P. A. B. Widener ll: Son of J.E. Widener; purchased Elmendorf from the estate of his father; married to Gertrude T. Widener; died in 1948 and left Elmendorf to his son, P.A.B. Widener lll.

Gertie Widener: Gertrude T. Widener, also known as Mrs. P. A. B. Widener ll; had two children with P. A. B. ll–P. A. B. Widener lll and Ella A. Widener; successfully raced homebreds in the 1950s and 1960s under J. E. Widener's colors of red and white stripes and black cap in France, where she mostly lived after the death of her husband; dispersed stock in 1968 and died in 1970.

Ella Widener Wetherill: Daughter of Gertie Widener; married to Cortright Wetherill; owned Happy Hill Farm in Pennsylvania with her husband and also bred horses in France, where she owned the 133-acre Chateau de Drouilly; died in 1986.

Capo Kane is a cross of Godolphin (Darley) sires Street Sense (Street Cry {Ire}) and Hard Spun (Danzig), a type of home breeding that was common practice among owners and breeders from the past. August Belmont ll, for example, bred daughters of Rock Sand to Fair Play, both of which stood at his Nursery Stud, and the most famous example of this cross was Man o' War, by Fair Play from the Rock Sand mare Mahubah, foaled in 1917. Belmont bloodlines were important to J. E. Widener, who bought Belmont's horses on his death in 1924, and both Fair Play and Mahubah are buried on land that was Elmendorf at the time (now Normandy Farm). Widener also patronized Man o' War, another important marker in the bloodstock of the Wideners.

Street Sense is a Mr. Prospector-line stallion (Street Cry–Machiavellian–Mr. Prospector). What's not widely known is the pivotal role the Wideners played in the development of the sire line that led to Mr. Prospector (Raise a Native–Native Dancer–Polynesian–Unbreakable-Sickle {GB}), beginning with Sickle.

A Lord Derby-bred son of Phalaris (GB) and blue-hen Selene (GB), Sickle was a high-class stakes-winning 2-year-old just a shade or two from the top of his class, but he was unable to win in three starts the following year, though he was third in the 2000 Guineas.

Sickle stood his first year at Woodland Stud in Newmarket in 1929, but J. E. Widener imported the young stallion on a 3-year lease to stand at Elmendorf for the 1930 season before buying the son of Phalaris outright for $100,000 from Lord Derby at the end of the lease. He'd originally tried to buy Phalaris and had reportedly offered Lord Derby the staggering sum of $1 million for the leading sire, but was refused and instead settled for his son, who became a leading and influential sire at Elmendorf.

Widener bred Unbreakable (Sickle) in 1935 from an imported mare bred by August Belmont's French stud farm, Haras de Villers, and sent Unbreakable to race in England, where, like his sire, he was best at two, although he raced through age four. Unbreakable was returned to Elmendorf for stud, but wasn't anywhere near as good as his own sire in the breeding shed. However, he did sire Preakness winner Polynesian, a foal of 1942 bred by J. E. Widener.

Polynesian was an anniversary gift from P. A. B. Widener ll to Gertie Widener after P. A. B. ll bought Elmendorf following his father's death in October 1943. Sickle, incidentally, died in December of the same year.

Racing for Gertie Widener, Polynesian was a talented and tough campaigner who won 27 of his 58 starts from two to five. Though a Classic winner, he developed into a top-class sprinter as an older horse, and like his sire and grandsire, he entered stud at Elmendorf, in 1948–the year P. A. B. ll died. For the 1949 breeding season, with the future of the estate in flux, Gertie Widener moved Polynesian to Ira Drymon's Gallaher Stud in Lexington, and in 1950, P. A. B. lll sold the main 600 acres of Elmendorf and its breeding stock, including three stallions, to two partners, Tinkham Veale ll and Sam Costello. (Max Gluck purchased Elmendorf in 1952.)

At this juncture, random luck played a role in the continuation of this line, and the excellent John Sparkman has written more than once about it. Alfred G. Vanderbilt's Discovery mare Geisha was boarded at the Dan Scott Farm on Russell Cave Pike, which was across the road from Gallaher. Geisha was scheduled to be bred to a stallion at Greentree Stud in 1949, but she refused to board the van and Scott apparently called Vanderbilt's manager and suggested, as Sparkman wrote in a 2009 blog post, “that Geisha should be walked across Russell Cave Pike and covered by Polynesian, instead of risking life and limb to get her on a van. The result, of course, was Native Dancer.”

Gertie Widener put Vanderbilt's great horse on the map as a sire in Europe by racing several homebred Native Dancer stakes winners overseas, including Hula Dancer, first in the 1000 Guineas in 1963; Dan Cupid, winner of several stakes races in France, second in the French Derby, and later the sire of the great Sea-Bird (Fr); and Prix Djebel winner Takawalk.

But it's Ella Widener Wetherill and her husband who get the credit for Native Dancer's lasting influence. They bred Raise a Native, the sire of Mr. Prospector, and you know the story from there.

Gertie Widener acquired Ampola and bred Polamia and Mia Pola, the seventh and sixth dams. Polamia is also the dam of the Gertie Widener-homebred Grey Dawn (Fr) (Herbager {Fr}), the only horse to defeat Sea-Bird. There's some symmetry to this, because her homebred Dan Cupid, Sea-Bird's sire, lost the French Derby narrowly to Herbager.

Like her mother and grandfather, Ella Widener Wetherill was drawn to France and bred horses at the storied Haras du Mesnil, where the likes of Grey Dawn were foaled. The allure of the lush landscape is evident in a famous painting by noted artist Richard Stone Reeves of a foal with his dam and a chateau in the background, titled “Grey Dawn at Chateau du Mesnil.”

The Wideners had a long history at Mesnil dating back to J. E. Widener, who'd kept his mares and young stock there when it was operated by Jean and Elisabeth Couturie, and it's been said that Widener designed an L-shaped barn at Elmendorf (now on Normandy Farm) after a similar structure at Mesnil, a farm that was established by Jean Couturie in 1908 around the same time Widener was first sending stock to France.

The original Mesnil, which Madame Elisabeth Couturie continued to operate with great success as a breeder and owner in her own right after her husband's death in the middle of the century, was later divided into two farms for the two Couturie daughters. One farm kept the original name and the other became Haras de Maulepaire, which is still owned and operated by Comtesse de Tarragon, one of the daughters. Her late husband Comte Bertrand de Tarragon, who died in 2013, has a Group 3 race named in his honor, and her mother, who died in 1982, has a listed race named after her, the Prix Madame Jean Couturie. Mesnil is now run by the comtesse's nephew and his wife.

With this extended history of Elmendorf principals and associates in Tuzla's pedigree, it's almost poetic that Robert and Janice McNair's Stonerside privately purchased and raced the Gl Ramona H. winner and then bred from her Mambo Princess, Capo Kane's second dam. Why poetic? Because in 1997, Stonerside had purchased all the broodmares of Jack Kent Cooke's Elmendorf. Cooke had purchased the historic farm and its stock in 1984 from Max Gluck's widow after Gluck had had an outstanding tenure as the master of Elmendorf from 1952 until his death in 1984.

In 2008, Darley, the breeder of Capo Kane's dam Twirl Me, bought Stonerside and its stock, bringing this full circle. Through the years, this family has continued to perform and is responsible for such Group 1 winners as Green Dancer, The Gurkha (Ire), Silasol (Ire), Solemia (Ire), Quijano (Ger), Okawango, Authorized (Ire), Alhaarth (Ire), Makfi (GB), Porlezza (Fr), Pornichet (Fr), Super Sheila (Aus), Metamorphose, Dream Well (Fr), Sulamani (Ire), and Zagora (Fr), among other high-class runners. And this list only accounts for top-level winners after the Pattern was instituted 50 years ago.

All of this is to say that what Capo Kane may have lacked physically for his breeder in California, he more than makes up for with depth of pedigree and international history, particularly through the Widener family's contributions. Sometimes we forget that the horse in front of us may have been fashioned through years of careful cultivation by others and may have more to him than meets the eye.