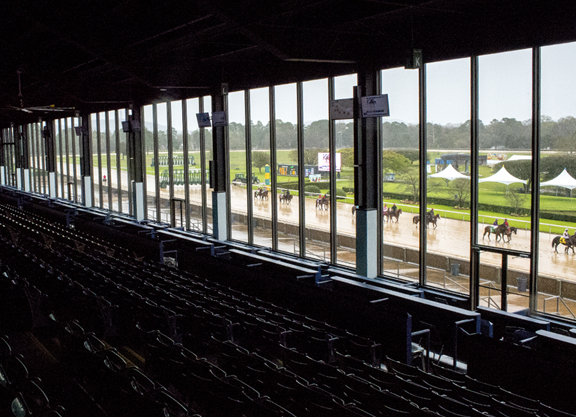 Two weeks ago, the bombshell indictments of trainers Jorge Navarro, Jason Servis, et al., sandwiched between a volatile stock market and the spread of the coronavirus, were the talk of the industry, leading to renewed calls by some for the passage of the Horseracing Integrity Act in Congress. At the time, the doping scandal promised to upend racing's precarious standing, but with hindsight, the plunge of the markets and the rise of the virus may cost the racing and breeding industries greater long-term harm than what's alleged in the indictments.

The virus has already led to a “temporary” stoppage of racing in the UK, France, Ireland, Australia, New Zealand, South Africa, and South Korea. The Dubai World Cup was recently cancelled, after invitees were on the grounds at Meydan. Woodbine is delaying the start of its season in Canada. And in the U.S., many racetracks across the country have shut down for the moment– most of them after first continuing without patrons and under CDC guidelines. A few tracks are still racing, notably TSG's Santa Anita and Gulfstream Park, but for how much longer is anyone's guess. And how safe is this for its participants? Several well-known jockeys have recently announced that they won't ride for the time being, heeding the best practices advocated by public health officials, and one big name, Javier Castellano, has tested positive for COVID-19.

The global economic meltdown of 2007/2008 was a watershed event and is a recent-enough memory to recall the damage it did to chunks of the business in all sectors across the board. Racetracks, stud farms, sales companies, owners, and breeders were all affected. What was reconstituted since then was different in many ways to what had preceded it, most notably with consolidation taking place at the top of a contracting industry with the bottom the most adversely affected.

From 2009 to the present, it's the top of the industry that has recovered and prospered the most while those survivors from the middle down to the bottom haven't bounced back as well.

It's possible that now the kaleidoscope is about to be shaken again as a recession looms amidst the damage that the virus continues to inflict globally, and if that happens, those at the bottom will once again be hit the hardest, and the industry will potentially contract even more and take on yet another shape– and who knows what that will look like?

CDI deserves props for proactively rescheduling the Kentucky Derby for Sept. 5, and perhaps that date is far enough away that it will go off unscathed. It will then be followed by Keeneland's September yearling sale, which will be a back-to-back presentation of the biggest race in the U.S. and the biggest sale in the business. However, if tracks and sales open for business before the virus is tackled, they will get hit hard, as will–more importantly–the health of the people involved in racing and breeding.

Presently, there isn't an antidote for COVID-19 and it's estimated that a vaccine is at least 12 to 18 months away. The only ways to slow the spread of the virus are through social distancing and vigorous hand washing, meaning that each of us is dependent on everyone else for following these procedures.

Earlier this week in TDN, New York-based bloodstock agent/racing manager Brad Weisbord wrote about his bout with the virus in gripping detail, and his business partner Liz Crow tweeted this warning Mar. 19: “Just got back @OBSSales March. Highly likely I was exposed to COVID-19 w/ so many flying in from all over and a gathering much larger than 50 people. Plan to quarantine myself for 2 weeks to ensure I don't spread to anyone else in my community. This is serious, be safe everyone!” That's sage advice.

A trainer I know in the Midwest, who requested anonymity, said he's contracted the virus, too, and his symptoms were consistent with COVID-19 and with what Weisbord experienced. He had a fever and dry cough to begin with, then struggled to breathe days later. He said he was worried about the phlegm blockage in his lungs that had curtailed his air intake, and he eventually resorted to Albuterol, a bronchodilator used in people and horses to clear up respiratory issues. It worked for him, he said, and by day 10 he was feeling better, coughing up phlegm and breathing well enough to feel optimistic for recovery. Neither he nor Weisbord was tested for COVID-19–an inadequacy of the federal response to the virus–and each had to self-medicate and ride out his illness in isolation. Both were fortunate not to need a respirator and the ICU, but others won't be.

Though COVID-19 doesn't discriminate by economic standing, migrant track workers at the bottom of the ladder are the most vulnerable of our industry members. They have thin safety nets to begin with, and if and when they contract the virus, there are potentially greater chances for them to spread it amongst themselves, particularly on the backstretch where many of them live in close proximity to one another. This could potentially affect the care of horses down the road.

It's unfortunate, but these workers are also the last to be thought of many times, and I was reminded of this in a recent conversation with a trainer who was describing the shipping plans of his horses for races this weekend.

“[The groom] will come down with them, and he'll be with them through the rest of the week,” the trainer said.

Where's he going to sleep?

“He's going to bunk with another guy in that guy's room in the barn,” he said.

Are there two beds?

“Heck, I don't know,” the trainer replied. “I don't look into the specifics of the accommodations.”

And how about the fate of these workers as funds dry up with racetrack closures?

“So far, we're okay,” the trainer said. “But you're always concerned in times like this, the longer tracks stay closed, if an owner might call up and say, 'Sell my horses, I can't afford to keep 'em without racing.'”

Jim Lawson, Woodbine's CEO, addressed this the other day in the Toronto Sun (Mar. 25): “There's just no money right now and that's the problem… We're working with the government on a relief fund, but we're putting so many grooms and hotwalkers and everyone else out of work. And despite the perception that horse owners are wealthy, they really aren't. There's a small handful of owners that are wealthy and the rest of them are hard-working people. And they can't make this work without any sort of funding.”

The Jockey Club Safety Net Foundation is soliciting donations specifically for backstretch workers affected by COVID-19. You can donate here. Jessica Chapel, a turf writer and blogger with considerable industry experience, has been busy on Twitter compiling a list of organizations that can help backstretch workers, too. You can view the list here.

Unlike tracks, breeding farms have remained open for business, and those in Kentucky are operating under the strict guidelines of the Kentucky Department of Agriculture. Nevertheless, many on this side of the business are apprehensive.

“I'm nervous, yeah,” a mid-level breeder with a significant consignment planned for Keeneland's September yearling sale told me recently. “I've booked to stallions this year with the expectations that the sales of those yearlings will give me the funds to pay for those stud fees next year. I think, right now, you have to be worried about cash flow.”

He isn't alone in this regard. A lack of cash flow will have a chain reaction through the business when bills and stud fees come due and go unpaid. And as part of that cycle, a recession and a bear stock market could depress prices of sales yearlings, weanlings, and 2-year-olds, which in turn would lower demand for the broodmares that produce them. That could put downward pressure on stud fees and affect the guys at the top that pay big money for stallion prospects. It's a cycle we saw play out after the previous economic meltdown.

Perhaps the $2-trillion federal stimulus package that recently passed the Senate and goes to the House Friday will help to stave off the direst of conditions. The stock market has regained some of its steep losses the last few days on news that the package would be passed, but ultimately the health of the industry and the people within it depend on controlling Covid-19, and federal intervention, which was weak to begin with, can't do as much as the states can at this point.

The states are on the front lines of fighting the coronavirus, and we're dependent on them to act individually and in concert for the common good. Kentucky, for example, under the leadership of Gov. Andy Beshear, has been a model for the country in containing the spread of the virus, while neighboring Tennessee, in contrast, has been the opposite.

It's ironic that those that pinned racing's salvation on the passage of a federal bill are at the mercy of individual states to contain the spread of a virus that's wreaking havoc upon them. The Horseracing Integrity Act, essentially, was developed as a vehicle to bypass state laws, but the collective behaviors of those states and their laws–not federal actions–will now determine the well-being of racing and breeding. It's something to note, when we finally get to the other side of this, that perhaps better outcomes are possible dealing directly with states than the feds after all.