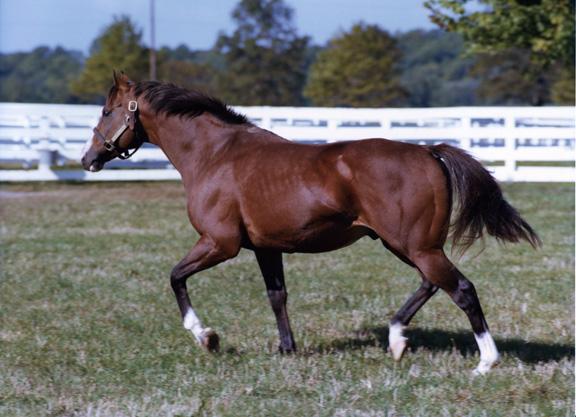 The advent of Twitter over the last decade or so has made racing results quickly accessible to fans and observers anywhere in the world, so much so that it seems that a greater number of people in the U.S. are more familiar with European racing than ever before. Back when I was a kid, we'd have to wait for the Blood-Horse magazine to arrive in the mail to scan the 10-day old European results in the agate type in the back pages. Now, we get a video of a race on Twitter minutes after the finish, and you've got quite a few people on the platform discussing those races with as much passion and knowledge as they do racing here. Moreover, these European visuals have exposed more Americans to the glaring differences in racing environments between here and there.

To begin with, the top European races are contested on turf instead of dirt. And more importantly, there's a greater variation in distances, courses, and racing styles over there, as the videos of the one-mile G1 Sussex S. on Wednesday from the U.K. and the two-mile G1 Goodwood Cup a day earlier from the same venue pointedly illustrated. There are no Grade l races in this country at two miles, and neither are there Grade l races at five furlongs here as there are in Europe, where 12 furlongs is considered a “middle distance” and the cadence of races is markedly slower earlier, no matter the distances–which are clearly delineated at sprints at five and six furlongs, mile events, 10-13 furlong races, and extreme staying events at a mile and three-quarters up to two-and-a-half miles.

In contrast, almost all top races here seem to hover within a narrow band of seven-to-nine furlongs over dirt ovals and are contested frenetically from the start. Also, 12-furlong horses here are considered “stayers” or “plodders,” and though we do have a graded turf program that caters to horses over 10-12 furlongs, many of whom are ex-European imports, the winners of those races are rarely sought after as stallion prospects like our nine-furlong dirt runners and 10-furlong Gl Kentucky Derby winners.

This disconnect between the racing environments of the U.S. and Europe has been particularly pronounced since 2000, though the trend was evident in the 1990s, and it's directly related to the types of stallions that find favor here versus there. Since North American-based Northern Dancer exploded in Europe with Nijinsky in 1970, Europeans, particularly Coolmore, have collected his sons, and Coolmore hit the mother lode with the 1984 G1 Irish 2000 Guineas winner Sadler's Wells, whose sons Galileo (Ire), a G1 Epsom Derby and Irish Derby winner, and Montjeu (Ire), winner of the G1 Irish Derby and Prix du Jockey-Club (French Derby) back when it was still run over a mile and a half, have dominated European Classics during the same time frame that N. American-bred influence was waning in Europe.

In fact, it may come as a surprise to some on Twitter who ardently follow European racing nowadays–many of whom I'd hazard a guess are younger than 50–that N. American-breds at one time ran roughshod over some of Europe's greatest races, including the Epsom Derby. During the 1970s, for example, Nijinsky (Northern Dancer), Mill Reef (Never Bend), Roberto (Hail to Reason), Empery (Vaguely Noble {Ire}), and The Minstrel (Northern Dancer) won the prestigious mile-and-a-half Classic, followed in the 1980s by Henbit (Hawaii {SAf}), Golden Fleece (Nijinsky), Teenoso (Youth), Secreto (Northern Dancer), Shahrastani (Nijinsky), and Nashwan (Blushing Groom {Fr}). Things slowed a bit in the 1990s, with Erhaab (Chief's Crown), Lammtarra (Nijinsky), and Benny the Dip (Silver Hawk), and by the aughts the Americans were limited to just Kris Kin (Kris S.), who won the Blue Riband in 2003. Since then, Galileo and Montjeu have between them accounted for nine European-bred winners of the race, while their sons New Approach (Ire) (Galileo) and Pour Moi (Ire) (Montjeu) have sired two others.

Northern Dancer's son Danzig also established a foothold in Europe that remains strong through today. North Light (Ire), the winner of the Epsom Derby the year after Kris Kin, was by Danehill, an outstanding and influential son of Danzig; and two other winners since then, Sea the Stars (Ire) and Golden Horn (GB), were by Cape Cross (Ire), a son of the Danzig sprinter Green Desert; and Sea the Stars sired Harzand (Ire), giving the Danzig line four winners of the Classic since 2003. Though Danzig's European presence is primarily based around milers and sprinters to Sadler's Wells's main influence in the mile-and-a-half races, you'll note that Cape Cross and Sea the Stars have made this branch of Danzig into players at European middle distances, and Sea the Stars has even ventured farther into extreme-stamina territory.

In total since the last U.S.-bred winner of the Epsom Derby in 2003, the Northern Dancer line through Sadler's Wells and Danzig has accounted for 15 of the 17 winners, with only Sir Percy (GB) (Mark of Esteem {Ire}, who traces to Mill Reef) and Workforce (GB) (King's Best, a son of the Mr. Prospector horse Kingmambo) breaking up the monopoly.

Of course, there are many other branches of Northern Dancer that have had success through the decades and are still successful in Europe, but Sadler's Wells and Danzig are the stars, and they've combined successfully in pedigrees, back and forth, to keep the Northern Dancer locomotive hurtling forwards. Frankel (GB) (Galileo), the top young sire in Europe and his 22-year-old sire's heir apparent, is from a Danehill mare and is a product of the Sadler's Wells/Danzig cross.

The pedigree of this year's Irish Derby winner Santiago (Ire) (Authorized {Ire}), who was third in the Goodwood Cup on Tuesday, employs this same cross, but with even more doses of Northern Dancer: his sire is by Montjeu and his dam's sire is Cape Cross, which is Sadler's Wells/Danzig, but in between and around them in his first five generations are the top Northern Dancer sires Lyphard and Nureyev, along with another dose of Danzig, making Santiago 4x5x5x5x5 to Northern Dancer and 4×4 to Danzig. There's no question European pedigrees are getting saturated with Northern Dancer blood, but so far with little ill effect.

Stradivarius (Ire), who won the Goodwood Cup for the fourth consecutive year and is the premier stayer in Europe in races up to two-and-a-half miles, is by Sea the Stars, who happens to be a half-brother to Galileo, and is inbred 5x4x5 to Northern Dancer through Danzig, Sadler's Wells, and Lyphard. Stradivarius's pedigree illustrates how a branch of the Danzig line evolved gradually from speed to stamina through the generations in the sequence of Green Desert to Cape Cross to Sea the Stars, and it did so only because the racing environment in Europe allowed it the opportunity. This isn't an option in America, where to succeed as a sire requires consistent high-class speed in the seven-to-nine-furlong Grade l dirt races, with occasional strikes in the Classics at up to a mile and three-sixteenths, a mile and a quarter, and a mile and a half.

Mohaather (GB) (Showcasing {GB}), the winner of the one-mile Sussex S. on Wednesday, is also a member of the Green Desert branch of Danzig as Stradivarius is, but his sire is by Oasis Dream (GB) (Green Desert), who tends to get more sprinter-milers and stays truer to the ethos of Danzig.

The Sussex was notable for another reason, too. In the beaten field were two American-bred Classic winners this year. Third-place finisher Siskin (First Defence), undefeated in five starts entering the race, won the G1 Irish 2000 Guineas, and Kameko (Kitten's Joy), fourth, had won the G1 2000 Guineas. The duo were the first American-bred European Classic winners since Senga (Blame) won the G1 Prix de Diane (French Oaks) in 2017–and she was, I believe, the first since Arctic Cosmos (North Light) won the G1 St. Leger in 2010–and are harbingers that American-breds might once again start to have an impact on the European Classics, particularly as a newer generation of American owners are getting more smitten with the idea of racing in Europe.

Kitten's Joy is that rare American-based turf sire who's succeeded against the odds, but he came up through the all-weather era and benefited from a subsequent increase in turf racing to lead the N. American general sire list in 2013. Since then, he's attracted some European patronage and has had a string of European successes, led by the late European champion and Group 1 winner Roaring Lion and including others such as champion and Group 1 winner Hawkbill, French Group 2 winner Taareef, and current Irish Group 3 winner Crossfirehurricane in addition to Kameko.

War Front, one of Danzig's last sons, is another with a sparkling track record in Europe, where he's been particularly effective with his juveniles and at sprint and mile distances. He's been bred to quite a few Galileo mares by Coolmore and is probably sitting on a Guineas winner down the line.

Aside from them, however, there aren't too many other American-based sires that are sought after in Europe, but that might change.

Siskin's pedigree offers the first clue. First Defence (Unbridled's Song), a Grade l winner at seven furlongs on dirt, is now at stud in Saudi Arabia, but Siskin's breakthrough in a European Classic was the first for the Unbridled line, which has been so effective on American dirt but nowhere near so on European turf. Siskin's success now suggests new hope for the line, and that bodes well for Coolmore's Triple Crown winner American Pharoah (Pioneerof the Nile), who's from the same line by way of Empire Maker (Unbridled) instead of Unbridled's Song (Unbridled).

So far, American Pharoah is showing a distinct penchant for the turf. From his first crop of 3-year-olds he's represented by nine black-type winners and six group/graded winners, most of them on turf. He didn't come up with a first-crop European Classic winner this spring and summer–neither did Northern Dancer; Nijinsky was in his second crop–but American Pharoah does have a dirt colt in Japan who's eligible for the Kentucky Derby in the fall.

Sunday Silence, based in Japan, and Northern Dancer were two Derby/Preakness winners who changed the face of racing in Japan and Europe, respectively, and left sons to continue their work. American Pharoah and Justify, both of whom were even more accomplished in the grueling Triple Crown than them, will be given their own chances to succeed in Europe. Perhaps the European climate will be just right for them, especially with Montjeu gone, Galileo aging, and voids opening for another infusion of American blood.